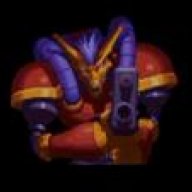 Custodes​
Quis custodiet ipsos custodes?​
​
​
Introduction​
​
Custodes is a labor of love, from me and my best friend.  We both have a love of the classic RPGs, Dragon Quest 1, Golden Sun, Final Fantasy 3, and the like.  We enjoy crafting storylines and new worlds, and for the past year and a half have been working on our own addition to the "classic" RPG genre.  We have had our story planned out and finally recently finished the first chapter of the game.​
​
​
About Us, and the Realization ​
​
When we started, me and my friend initially intended to create the grand majority of the game with RTP resources, in order to get it finished. Once we had the entire game done, playthrough-wise, and quashed all major bugs, we planned on bringing on Artists and Composers to help us re-paint the game, and give it a beauty to match the story. My talents lie in gameplay, events, balancing, and fun additional systems.  His talents lie in mapping,  artistic vision, and a willingness to tell me the hard truths.  We both feel we excel in story.​
​
How naive we were.  The other day we were discussing finishing changes to the first chapter, to ensure it's polish is ready for a small demo for feedback.  Until now only close friends have tested the game, and while all feedback is appreciated, we need objective comments, and our demo would do wonders to help us know we're on the right track, and where we lag behind.​
​
Upon going through and listing all of the resources we would need to change in order for the demo to be up to standards, we realized this could no longer be a 2 person project. Extrapolating from the scope planned, and the amount of resources we already need, its time we added new members to our small team, because we CANNOT do this all alone.​
​
​
The Game​
​
We intend for Custodes to be a vehicle for our story and our world.  A throwback to when 3D wasn't even a concept, every game didn't need online multiplayer to exist, and you could get lost in fantastic worlds, each more brilliant than the last.   Our story involves a young lumberjack named Scaize, and a young mage-in-training named Lunar, hailing from the miniscule logging village of Farwood, tucked away in the mountains of the Cerath continent.   In the past, there were no users of magic.  When otherworldly portals began opening up, and pouring out countless horrors, the people of our world begged "The Maker", their deity, to save them.  Because of his touch, mages were born to destroy the monsters, and seal up the portals that unleashed them.  In the current day, when portals are no longer a concern, and the true monsters that do exist live far from society, the mages are leaders,  assisting in guiding the world forward.​
​
Our vision for the game is an adventure, filled with faraway places and fantastic landscapes.  Two friends, who can only rely on each other, trying to stay alive in a world that has turned hostile to them. If you're going to try and escape certain death, it's better with your best friend by your side.​
​
​
​
Our Needs​
​
This is simply a list of the current resources we would need for our demo, and we haven't even looked at replacing our tilesets or animations yet!​
​
We are creating this in RMVXA, for further reference.​
​
​
4 concept sketches, for the three main characters that appear in the demo, and the generic enemy.​
​
10 Holder-Style Battlers, for each enemy and PC in the demo.​
​
4 sprites, (we are undecided on Mack or VX style) for each of the 4 characters in the concept sketches.​
​
4 Face-sets, including emotions for the 3 main characters, in the demo.​
​
11 BGM tracks, from our battle theme, to map themes.​
​
2 ME tracks, Battle End, and Game Over​
​
6 Battlebacks, for the locations you are in combat in the demo.​
​
And finally, 20 still drawings, for intense cutscene moments, our title screen, and game over screen.​
​
This is in addition to later, needing tilesets, animations, icons, and more of the above!​
​
​
So as you can see, we need help! So we are officially putting out the call to artists and composers who wish to assist us, as a team, in this project.  We are two college kids, so we are unable to regularly pay for work from Classifieds.  We aren't even sure we want to release the game commercially.  We have no desire to make money from this game, we just want to create it, and put our stories on a screen.  However, if me and my friend need to invest funds into the game, for resources or scripts , etc, we would discuss with our entire team the best way to handle a commercial release. Most likely it would involve paying back the development costs we've incurred, then a split as agreed upon by all members of the team.  Like I said, this isn't about a money, and it's likely we won't release commercially.​
​
You will receive full credit, and even in the event of a non-commercial release, if in some way the game makes any profit at all, it'll be shared by all of us. ​
​
​
​
​
​
Screenshots​
​
​
This line perfectly illustrates our main character's personality. 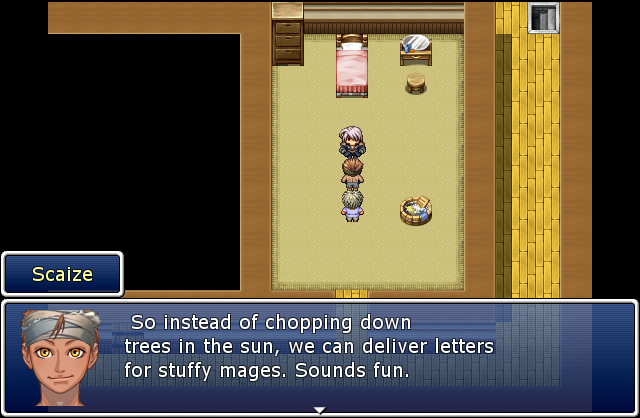 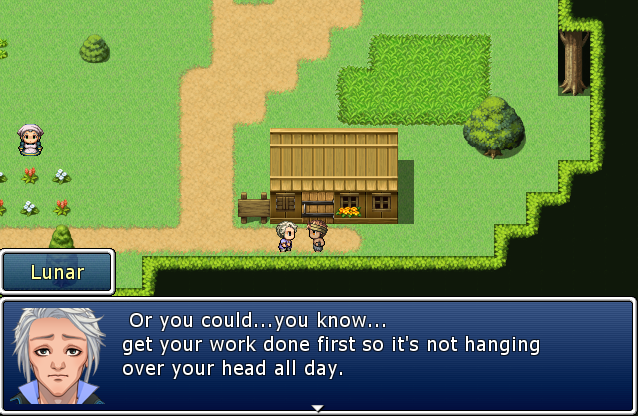 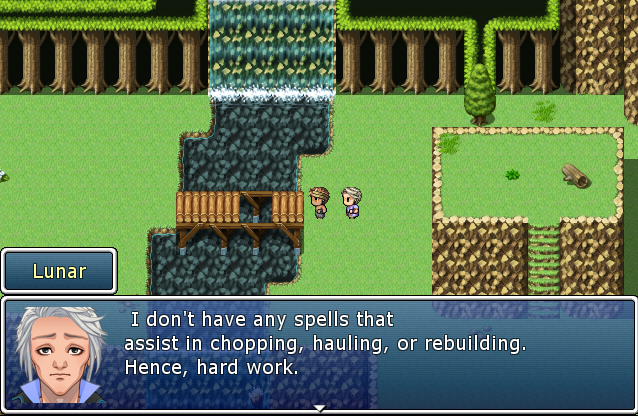 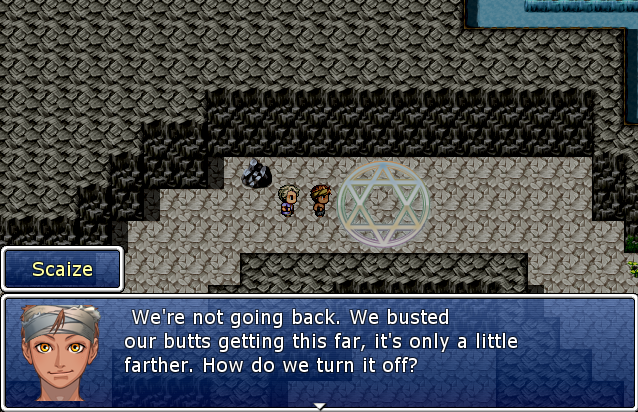 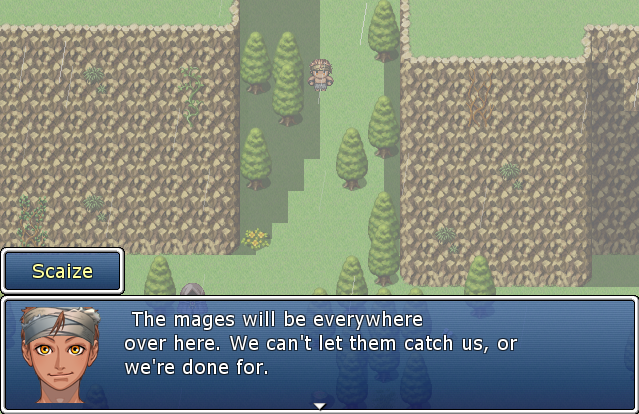 ​
​
But when you gain the notice of the wrong individual, beware.​ 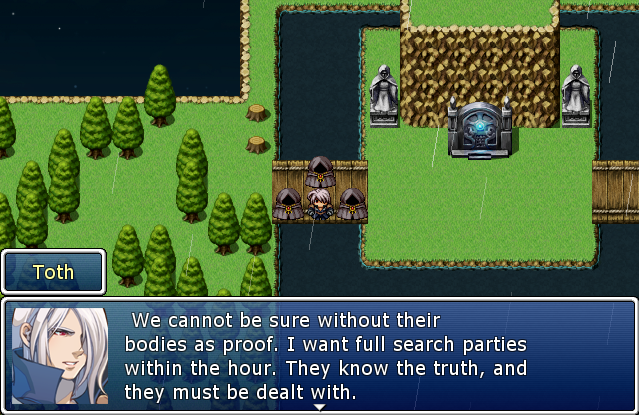 ​
​
​
​
​
I've also included a screenie of one of our intro scenes, this would be an example of one scene that would be entirely replaced by a series of full-art stills, which I believe would add so much more depth.​
​
​ 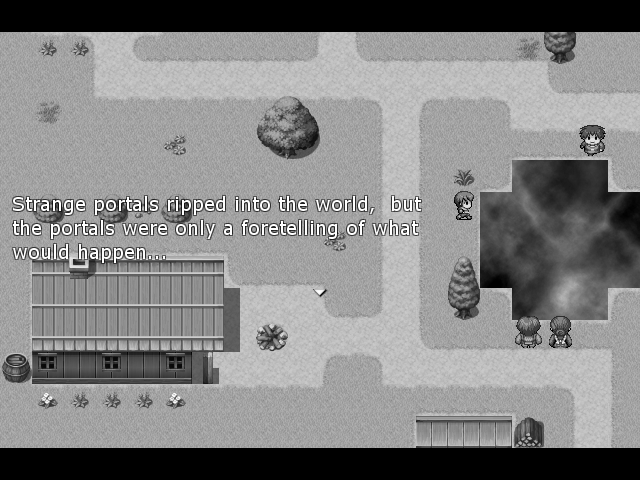 ​
​
​
Contacting Us​
​
A good email to reach me at is​
deguidechris@yahoo.com
, and I will also be watching my PMs on this site. For artists, a sample of your previous work would be greatly appreciated, though we aren't exactly picky.
​
​
Note, we would love to bring a scripter on board as well, we've personally learned a bit of RGSS3 but having a more experienced mind would be a boon.​
​
​
​
Credits​
​
Right now, we can thank YanFly for his wonderful message script , ​
and to Yami and all other contributors to BattleSymphony, which we hope to implement as soon as possible.​
​
​
Thank you very much for reading!​
Last edited by a moderator: Jul 5, 2014

TheoAllen
Saying overused tropes are bad is like saying I - IV - V - I chord progression is bad.
47 minutes ago •••