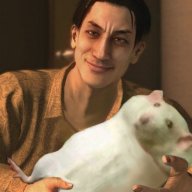 There are mechanics in my game that allow you to collect different herbs to use in crafting. In fact, these are similar events scattered around different locations, and when you interact with them, you get one flower and the event disappears. But the game has a dynamic time change and all flowers reappear every night at 12 o'clock in-game time.

At this point I am using a system of variables. Each flower event consists of two pages: one is blank, and the second has an event that only appears when a certain variable equals 1. That is, I have a separate variable for each flower. You can collect even all the flowers for a day, but when the day comes to an end, runs a random mechanism that either assigns a value of 1 to the flower variables from 201 to 210, or from 211 to 220. That is, there are 2 groups of 10 flowers, which are scattered on different maps. And every day this or that group grows, and the variables of the other group remain unchanged.

But I don't want to use variables and switches for that. I want to know if I can do the same thing any other way. I know a script that can restart events on its own after a certain amount of game time, but it only works while I'm on the map, which means it won't suit.

To repeat the problem more simply: I need many identical event-plants that can be harvested and then grow again at the beginning of each day.

RPG Maker doesn't have a time system by default, so we need to know which time system you're using (events, a specific script) so we know how days work in your game.

HexMozart88 said:
RPG Maker doesn't have a time system by default, so we need to know which time system you're using (events, a specific script) so we know how days work in your game.
Click to expand...

Unfortunately, I can only show it in Russian. 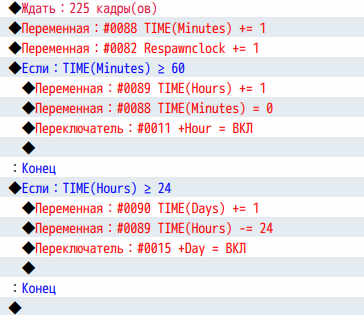 225 frames are one game minute. When minutes stacks more than 60, the game adds +1 to the hours variable and resets the counter. When hours stacks more than 24, the game adds +1 to days and also resets the counter. With 225 frames as a minute, the game day lasts 1 hour 30 minutes of real time.
Also when hours number reaches 24, switch "+day" activates, which runs this common event, of what I talked about earlier. Restores a certain group of flowers.