This is pretty interesting. The Suikoden influences are clear (to me anyway haha) and that's not a bad thing
All this really needs is some custom art to lift it to the next level but I know that's not easy to come by, still... great potential here!

Thanks @Finnuval . The influence is so clear from the start that the project is actually named "SuikoLike1".

It's still its own game with a lot of other influences, and the story is probably not as good as a Suikoden one. Even if there are a few twist (that I hint a bit), I think it's probably a lot more light hearted. The main character doesn't get forced into exile by some terrible event. Even though there are some deaths, war, revenge and other bad stuff, I also tried to put in a more "casual" feeling with a bit of humor (well for the "good path" anyway).
I'm also doing my best to give everyone an identity. I must admit there are a few "filler" characters that could use more background (heck, the boy who's asking you to grow more trees barely has any depth at all). Still, I did put hours of work into writing personal events for more than 20 party members (mostly as texts for now, but I left some room, for potential flashback cutscenes).
It's my first long RPG game and it's done by a one man team, so it will surely be flawed. There are a lot of good games out there that I don't even pretend to compete with, but as long as I get at least some people to enjoy it (not for a Suikoden wannabe but for what it is), it will be worth it. I hope it'll be considered at least better than your average trash RM game. lol

As much as I'd love to have custom art, I'm probably too strict about what I'd like and with 50+ characters the price would likely go through the roof. I may considering updating it in the future assuming I can gather the money for it one way or another, but the initial release will unfortunately be RTP as far as characters are concerned. I also bought some characters packs, but that's still not custom art, and they wouldn't fit in my current story (well they could but I don't see a reason to add more characters at this point).
I do intend to improve the tilesets a bit though (using the FSM packs at least) when I'll be done with most of the work. And I'll definitely be looking for some BGM to replace the default ones.

Yeah money and preference van both get in the way haha luckily story and gameplay outweigh it by far so you're good.

If you need to bounce some of your characters stories) around for feedback feel free to PM me anytime.
Im currently working on my own project also influenced by Suikoden to a degree and I know all to well the hardship of making that many characters feel 'fresh' and alive .
I find it helpful to go over Them with others sometimes Just to qet some 'fresh' ideas so maybe that might work for you too

I'm finally done with the Pre-Alpha version 0.0.40. That was pretty surely the last step towards the first Alpha version.
The last dungeons puzzles are done, the draft versions of the bosses are ready (some random monsters are still missing). The "good" endings are ready (further cutscenes still left to be added).

I'm preparing to tackle that evil path now. There's much to consider for it to be implemented without hurting the game too much. I was initally thinking about allowing to go back and forth between "pure evil" and "pure hero", but the more I think about it, the more it seems like a nightmare storywise where key events are concerned. It would be weird to burn a town to the ground and show up in the next one shaking hands and sharing jokes.
So I'm thinking about some alternate way : soft locking the player on a path (either at a certain point in the story, or by prompting a choice on a new game start). It would still allow the player to make good or evil choices but would lock the main plot events on either good or evil path (kinda enabling to still be a dark hero or a nice villain). 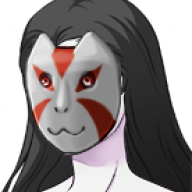 This looks interesting Will try it as soon as possible.

Thanks. What's available right now is still very limited but I hope you'll have some feedback for me.

I intend to update the demo version once the game's Alpha is ready (hopefully by the end of this month). The current demo is still based on the pre-alpha 0.0.34 and is missing quite a lot of improvements.

That's all for now. I've still a lot to do for the evil path and others features, improvements and changes.
As far as changes goes, I'm considering a rework of the knight class, because the actual taunt system makes it a bit too good at protecting the party while making most of its kit completely useless and not that fun to play. Basically the best strategy right now with a knight in the party is mostly spaming taunt, keep the knight healed up, and have the damage classes do their job (Yeah I know it sounds like a standard MMORPG battle...).
Last edited: Mar 2, 2019

I've been moving back home this week and my laptop decided to die 2 weeks ago, which has unfortunately halted my progress on the Alpha version. The data is saved and I've got my desktop PC here, so I should be able to resume my work soon enough (I'd feel better if I could double check with my laptop's data first though).

Meanwhile, here's a preview of some of the new features I've been working on : 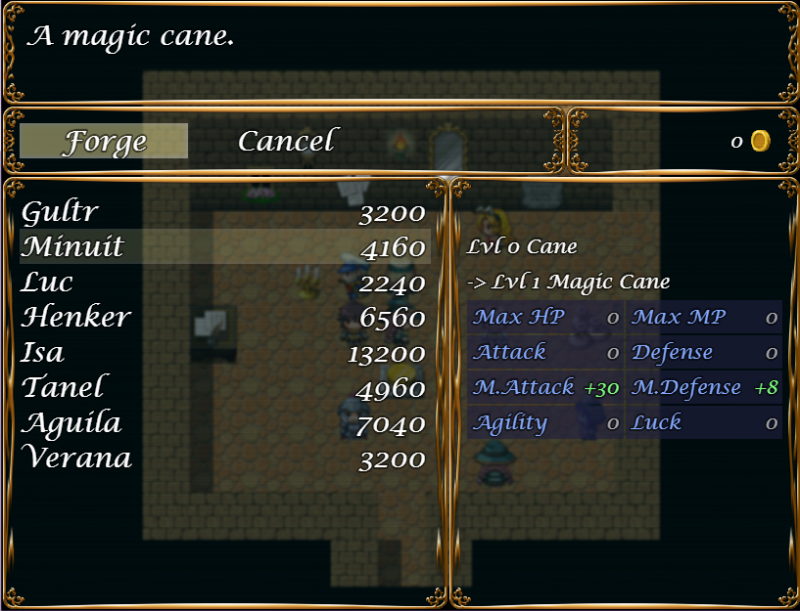 The interface is based on a mix from the basic shop and Yanfly's shop.
It's basically working the same way as Suikoden's, except the weapons are still removable and the standard weapon shop is also available.
Why add it at all then ? Well, it's really completely optional and only give a small edge to the players going through the trouble of unlocking it (cheaper prices and better weapons available sooner). I wanted it there as one of the many references to Suikoden without completely removing the weapon shop system. 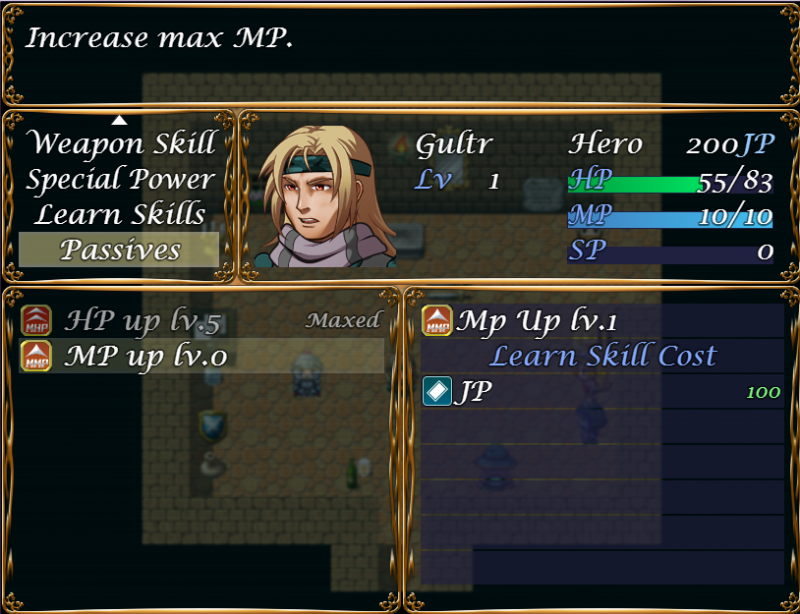 This is a feature I've been meant to add for a long time. As stated in my previous post, it adds a layer of customization while rewarding the time invested using your favourites characters. Of course, experience and skills already do that, but with a game featuring dozens of characters, I felt something more was needed to give an edge to the player's favourites over the others.
This screen is from an early test version with only 2 skills. The version I'm currently testing allows passive upgrades for every basic stat (up to level 5). It's gonna require a lot of testing to avoid making it too op, so the passive skills list is also still a work in progress so far.

Hi, I've taken a liking to your project, progress so far exceeds expectations! good luck with it

I've took the liberty to design a new Header regarding your title. Hope you don't mind, well its for you if you want to use it:

Thanks for your interest !
I'm always trying to find a balance between what I'd like to do and what I can do within a reasonable amount of time.

That header looks really nice. I'll see if I can use it.

The next version doesn't only have new features, it also comes with some "design" updates !

I felt like the portraits were a bit weird floating around the message window,
so I framed them to get along with the other windows 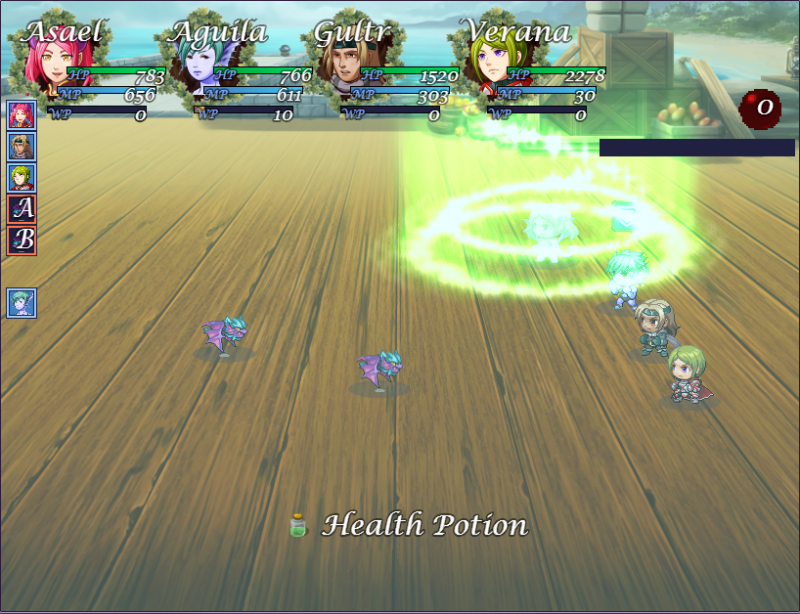 The actors portraits frames now have a background. The transparancy wasn't looking all that great before that.
The action queue was eating up a lot of space and messing with some other features, so It got a lifting.
Last but not least : Performed action (except for basic attack and guard) are now displayed. It should make the battles a bit more understandable, as sometimes it could be hard to tell what was going on.

It took me a bit longer than expected, due to some playtesting and updating the french version too, but the Demo Alpha v0.1.4 is finally available (donwload links on my itch.io page (see 1st post)) !
It's a huge version leap from the previous v0.1.3 since it includes the last 6 months of the Game version updates + the currently in progress work on the first Alpha version.
The demo still focuses on the same events (storywise), but includes some changes, more features and the possiblity to try out either Evil or Hero path.

It has a very interesting premise!!!

I believe, mainly the part of rebuilding the city!!! (

but at first view, I thought the people was getting my money and going away. Then I saw their buildings)
I have some considerations to help you improve the game.
How can I contact you?

how do you save the game in 1 file only?

Thanks for your feedback !

You can either message me on this forum or post on the game's itch.io page.
I'm working on a Discord server too, but it's not ready yet.

Kike said:
how do you save the game in 1 file only?
Click to expand...

I'm not sure I understand what you mean by that. If you're talking about the deployment, there are several possible methods : https://forums.rpgmakerweb.com/index.php?threads/deploying-the-game-without-additional-files.106324/

I've just opened this weekend my Discord server for people who wish to chat about my games and plugins : https://discord.gg/m85SkuY
Since it's very new, there's not much there yet, but I hope it will grow given time.
Feel free to drop by. Blue Slime is keeping the lights on, and I'm often there on my daytime. 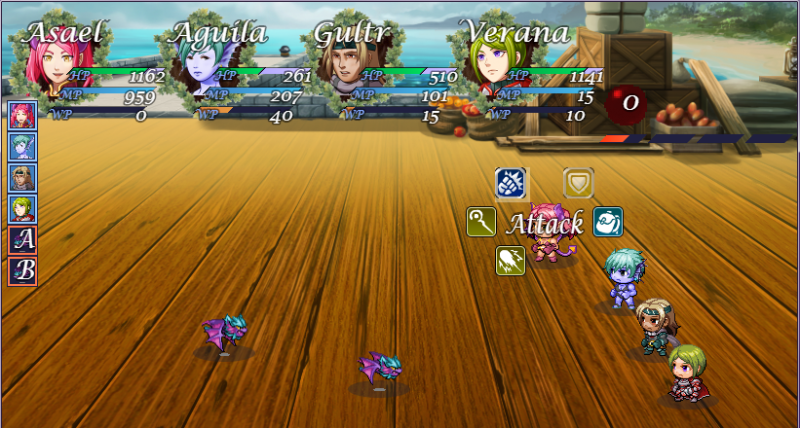 I'm in the process of slightly redisigning the gauges.
The party gauge is getting particularly reworked to take less space and be easier to read.
Also long overdue, the bonus protection will be displayed over the HP gauge, so the player can see how much protection every character has left.

Still working on the Alpha version.
I'm making adjustments to a lot of systems and interfaces.

Here's a preview of two of those :

It's been a year since my last post here (my Discord is more up to date for regular news). I'm very sorry for the wait ! Life got a bit in the way and I have been working on a few plugins during this time.

Anyway, the close alpha version is almost ready. As always there is still much to do, but concerning this alpha release I'm pretty much down to final testing and last checks. 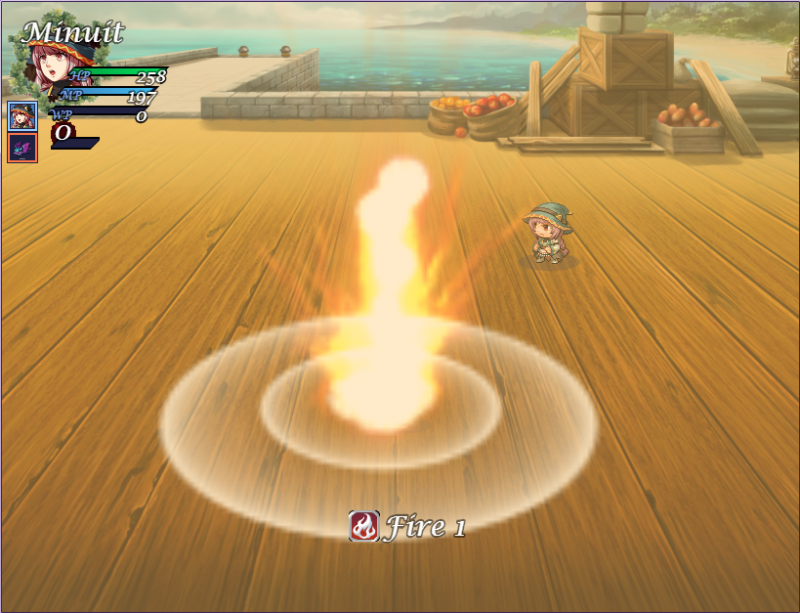 At this point I'm only doing some test, but I'm hoping to replace all the default animations currently used by 3D animations or other sprites (depending of what I'll manage to put together).
The battle interface has also been changed a little bit more with a smaller action queue, and a reworked party gauge.
You must log in or register to reply here.
Share:
Facebook Twitter Reddit Pinterest Tumblr WhatsApp Email Link