Sharm said:
Ah, I didn't even think about the cliffs taking up less space now that we can use autotiles on higher layers. Layers are so nice! The only thing I still miss from XP is the bigger tiles for the edges. I like my round corners.
Click to expand...

Maybe it's the morning, but I didn't get that part in the video (which is awesome btw). What does it mean that you can make auto cliff tiles bottoms and tops transparent now?

Candacis said:
Maybe it's the morning, but I didn't get that part in the video (which is awesome btw). What does it mean that you can make auto cliff tiles bottoms and tops transparent now?
Click to expand...

You can place autotiles in any layer now, so if you make an autotile with transparency, it'll show what's in the layer below it.

I'm looking forward so much to this. I love the idea of a move route preview too. Will make eventing out different skits so much easier.

Sadly, my laptop died so I was out of commission a bit for a few days. I have a nice new laptop now that has plenty of room for MZed on it. The good: it's a new laptop. The bad: I have to miss a week of putting cash on my steam account for MZ fake-layaway.

It greatly pains me that I'm too deep into my MV project to switch, but visual move routes would save me soooooooooo much time.

Candacis said:
Maybe it's the morning, but I didn't get that part in the video (which is awesome btw). What does it mean that you can make auto cliff tiles bottoms and tops transparent now?
Click to expand...

Now you don't need those big A5 cliff sections and you can just use the auto wall-like cliff tiles without the hassle of holding down shift a ton.

I wonder, if any A5 autotile can have transparency parts in them now. I know some autotiles had that feature, but not everyone.

I always liked A5 cliffs more because I could insert a lot more details in them than the A4 auto cliffs.

Oh, and is the default screen size of MZ 1280x720 or was this special for the video?

That was awesome! Love Aluxes!


M.I.A. said:
All this time I've spent learning to give the illusion of layers by careful and innovative layering + Shift mapping.. and now we have ACTUAL LAYERS
Click to expand...

Can you explain what you mean by that? I wonder if you misunderstand the feature. It is only to help you with drawing maps. It will not affect gameplay at all. It doesn't mean you can draw stuff on layer 1 and more stuff on layer 2, and the player will walk over layer 1 stuff but under layer 2 stuff.


Candacis said:
What does it mean that you can make auto cliff tiles bottoms and tops transparent now?
Click to expand...


Candacis said:
I wonder, if any A5 autotile can have transparency parts in them now.
Click to expand...

Yes, but it might look weird if you use them on the bottom layer, as they'll have no background. Unless you have a parallax background.

Candacis said:
I wonder, if any A5 autotile can have transparency parts in them now. I know some autotiles had that feature, but not everyone.

I always liked A5 cliffs more because I could insert a lot more details in them than the A4 auto cliffs.

Yes on the A5 autotiles.
The resolution is just the screen size of the project. But you can change any time.

Kich said:
I agree it might work in some cases, but only with simple shaped objects with no parts that require different priorities. Let's say I wanna make a canopy tent in which the character is able to enter and get around its framework. It's doable by playing with layers and priorities:

It's not with an event:

On top of that, the collision is automatically placed and it seems uncontrollable (not without programming, anyway). Also, I think in the long run it would compromise level design.
Click to expand...

I am fully with you, Kich.

Nice to see layers coming back, one big feature missing in all this time. But, sad to say, it's still not enough. Another big one, like the layers, is the priority system from XP. True selling point for me because it allows you, to a degree, freedom regarding character/object and tile graphic size if i do not like chibi (and i do not) as well as the illusion of depth/height.

It's clear, the new RPG Makers since VX were developed with chibi in mind. I love the XP RTP and sure, i do not need to use the new RTP. Technically i could scale the old RTP to fit the new tile size in the editor, that is not the problem, but what use do i have if the backbone was not designed to deal with that kind of ressources?

And that is exactly why i am still on XP and, from the looks of it, will be in future. Though it is a pain in the ass to deal with the old ruby version, the layers and priorities just sell the deal. Furthermore i can help me, to a degree, with rewriting some code for essential systems like collision etc. to let it run with fluid 60 fps (yes you can do this on XP). But still... it would be nice to have an updated base with higher Resolution and so on :/.
It is such a shame, really. I think this new Maker was a wonderful chance to bring oldtime XP users and the new generation (and users who switched to the new ones) together. The new (old) layer system is a good start but why stop in the middle? Hard to understand. It is also a missed opportunity, in my view, for the RPG Maker Series to develop and be taken seriously when comparing with other engines. Key systems should not be developed around the included graphics because it limits the user unnecessarily from the start.

Regarding the tent as an Object/Event:

You would solve this with several (in your case 4) Objets for the pillars and a fifth one for the canopy.
Objects with sophisticated structure like this one usually can not be implemented as one single Object, like shown in your example. That is not limitied to RPG Maker and applies to other engines with 2D as well.
Last edited: Jul 3, 2020

With the new map layering, I wonder if it'll be possible to finally change map tiles with events. Say like you have a volcanic area & the place you need to reach is blocked off with a river of lava coming from a volcano. You enter the volcano dungeon & find a way to either cut off the flow of lava or cool it down so that the lava river that was blocking your way changes into solid ground.

Can't seem to pull this off in MV without some high level tileset manipulation sorcery. 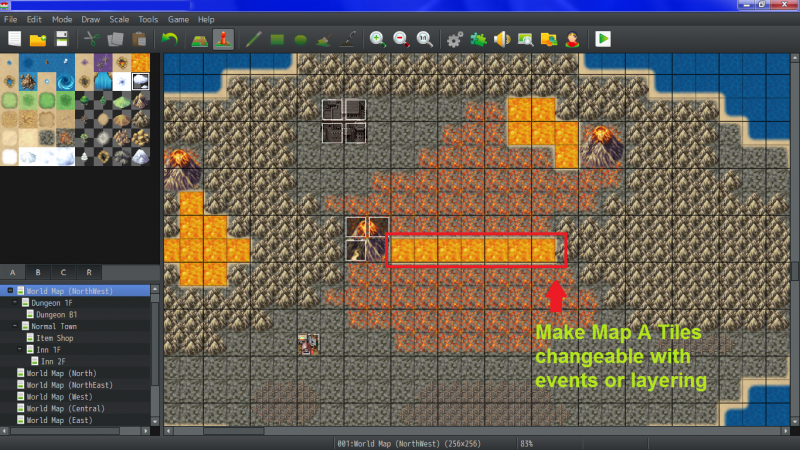 It would have been nice if you could target specific layers with an event command, but I fear it is just for mapping only.

@Animebryan
You can already do that in MV using Shaz's Tile Changer plugin. https://forums.rpgmakerweb.com/inde...opy-tiles-and-change-tiles.90437/#post-821350
Back when I still used tiles, that's how I was making the damaging trail behind the player in my game.

Animebryan said:
With the new map layering, I wonder if it'll be possible to finally change map tiles with events.
Click to expand...

Likely not. It is a return of XP's mapping system, and you could not do that with XP. This feature is purely to make mapping easier in the editor. It makes no difference to gameplay at all. 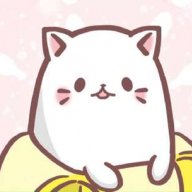 Candacis said:
It would have been nice if you could target specific layers with an event command, but I fear it is just for mapping only.
Click to expand...

You bring up a good point because I bet you could with a plugin.
Which makes the possibilities of plugins more impressive like removing all the tiles on a certain layer or changing them in some way, but who knows?

I just realised the autotile cliffs have rounded corners!!!! 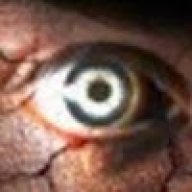 In case of the Visual Novel Maker, it is possible to build a package file for Android or iOS using Cordova CLI, so there is no need to use third-party tool. I think that was the most impressive thing in the Visual Novel Maker. I'm wondering whether even RPG Maker MZ is included a build system similar to it. 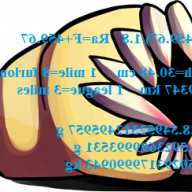 Oh my gosh
This is trully hyperfantastic!
I only hope they do modern like character resources, because that would help me a lot... except of having to do my own exclusive characters... (i am kinda of the programming rpgmaker...)

I wonder if we can actually assign star passability to ceiling auto-tiles again which let us walk under the top most tile like back in xp and I believe vc ace(?).

In all honesty its the lack of this basic function that stops me seriously making games. Not being able to move even 1 tile into the top of ceilings just makes the maps feel rigid and unnatural which saps all my creative motivation.

Yes, I know you can copy the top of auto-tiles onto b-e tiles but this makes mapping into tedious busy work.

Kich said:
EDIT: Good timing. I second @Shaz, it would be nice to bring back the priority system from XP.
Click to expand...

I'd love priority. I've been trying to manually work in priority on MV mapping through eventing, but it's clunky and a pain to do.

ShadowHawkDragon said:
which let us walk under the top most tile like back in xp and I believe vc ace(?).
Click to expand...

Sadly , not in Ace. You either have to use a script which lets you turn autotiles into star settings by painting them with a particular region, or use B-E tiles. I use a combination of the 2 methods for speed.

Please tell me this program has some sort of MV-MZ conversion...

misterdovah
Maker-ing has been being the best thing that happened to me this year so far. it is so good to rescue some old skills fo creativity and the people I have met are really incredible. I love my coffelanders and tocudos buddies. Maybe one day I will reach other countries folks too. S2
Today at 10:17 PM •••