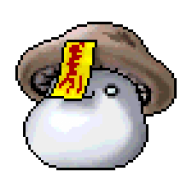 Charm of the Undead

I am currently in the early stages of working on a game, and I've decided to go with a 16-bit style by using 16x16 tile-set. Since RMMZ only supports tiles that are 48x48, I've had to upscale the tiles by multiplying their size by 3, making each individual 'pixel' 3x3px large to create a 16x16 tile with an actual size of 48x48. This worked for the most part, except for when it didn't. Certain tiles, although seeming fine in the editor, are warped when testing the game. I double checked to make sure that all the 3x3 'pixels' were properly aligned onto the grid in photoshop (which they were), so I am confused as to why the tiles seem warped.

I think this is weirds, because although the tile's might appear 16x16, they're not, but are instead RMMZ's 48x48. Only thing that has been done is that the tiles have been upscaled and multiplied by 3 to make them go from 16x16 to 48x48.


Here's a picture of what the tiles look like in photoshop. The grid is set up to 12x12px with one division, making each division 6x6px. Each division has four 3x3 'pixels' in it, which are perfectly aligned to the grid. There are 6 tiles in the image, as it a auto-tile. 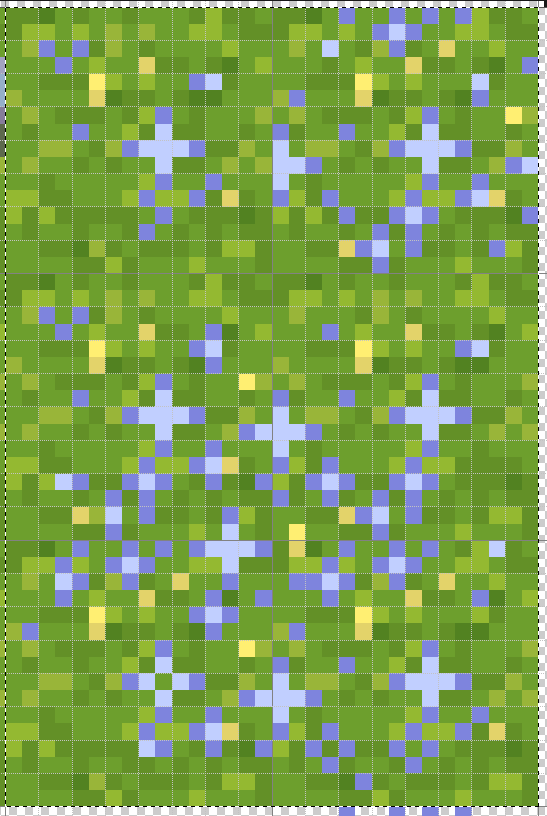 As you can see they look fine, and every 3x3 'pixel' looks the same size. In-game, however, it looks like this. Some of the 3x3 'pixels' get squished, either in length or width, and are instead 2x3 or 3x2px in size. 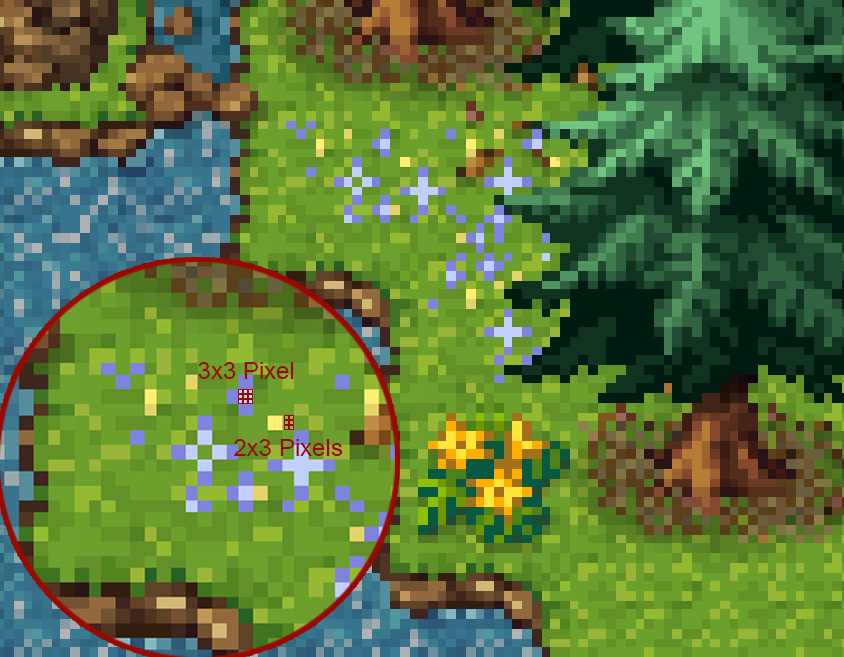 Does anyone have any idea as to why this happens, and if so, is there a way to fix this. I know it's not a major problem, but as someone who's a perfectionist, stuff like this bother's me.

Not sure but is this an auto tile portion of the tileset, A1 or A2? It kind of looks like it is, if so auto tiling happens by dividing each 48 x 48 into 4 quadrants and then mixing up where those quadrants go. I think that's what is happening here.

I am really confused by your terminology as you go between tiles (when I think you might mean tilesheet, because your pictures are very much not square) and pixels and "pixels"...it might be my own failing, but I have a hard time keeping track.

I have a further hard time figuring out where you're getting a 12x12 grid and something else in it is 6x6 and...

However, just zooming in on your sample picture, it looks off to me. Your 3x3 blocks do not appear to be perfectly aligned to the grid. If you follow the grid across or down, you'll see that within the same row or column it will be cutting through the first pixel of some blocks but the last pixel of others, meaning they're not entirely aligned. I will attempt to illustrate what I mean below.

It kinda looks like an issue that would happen if you are zoomed in. Are you by any chance zoomed in?

Charm of the Undead

I've managed to resolve the issue, which was not caused by the image itself, but by the 'Pixel Image Rending' setting in the VisuMZ_CoreEngine plugin. Disabling this setting fixed the weird tile-warping, however, renders the tiles blurry-ish when running the game in full-screen (which is what is was trying to prevent with the setting).

I appreciate everyone's input, with that being said I guess this thread can be closed.


ATT_Turan said:
I am really confused by your terminology as you go between tiles (when I think you might mean tilesheet, because your pictures are very much not square) and pixels and "pixels"...it might be my own failing, but I have a hard time keeping track.
Click to expand...

Basically what I was trying to say, and accidentally over-complicated, is that I upscaled a 16x16 tile by multiplying it by 3, upscaling each pixel in the tile to be 3x3 pixels in size and making it a 48x48 tile. The image I provided was an auto-tile, which is 2x3 tiles wide.

Regarding the grid not aligning in the zoomed-in picture you provided. That's an artifact because the dots on the grid are only 1px (on the monitor, not the image). Because 1 pixel can not be perfectly in the middle of the lines, as you can not have half a pixel, it had to choose a side to overlap with. This is the same reason why an in-game crosshair, unless it's width and height are dividable by 2, will never be in the exact middle of your monitor.

Ah yes the issue was caused by what I suspected but the trigger was different. If you want to know why the issue happens here is a general overview why:
When you go fullscreen or zoom in what usually happens is that the image/canvas gets scaled up to fit the new screen size or get the "zoom in"-effect. But since you have a limited amount of pixels it is not actually possible to make scaled up version which looks exactly the same unless it is by a factor of 100%. Just imagine the example of having a red (r), blue (b), and green (g) pixel in a row like so: rgb. Now we want to scale it up by 100% (only in the width to simplify the example). This is easy enough: rrggbb. Now try doing it for about 66% (to 5 pixels in length). This is no longer possible we would need 1.66 r, 1.66 g, and 1.66 b but we cannot draw half pixels. So now we have two approaches we can do. Either try to smooth it out by mixing the colors: r(rg)g(gb)b. This will give the blurry effect you encountered or we could try to just make some mistakes: rrgbb.
Here is a small visual example:

FxckBanshee said:
Regarding the grid not aligning in the zoomed-in picture you provided. That's an artifact because the dots on the grid are only 1px (on the monitor, not the image). Because 1 pixel can not be perfectly in the middle of the lines, as you can not have half a pixel, it had to choose a side to overlap with. This is the same reason why an in-game crosshair, unless it's width and height are dividable by 2, will never be in the exact middle of your monitor.
Click to expand...

I understand how displaying an overlaid graphic works, but it still doesn't make sense with what your image displayed - the grid did not choose "a side" to overlap with. As I described, and you can see, it overlaps different sides of different blocks. This can only happen if your blocks are not evenly sized, or the grid is not evenly spaced.

Regardless, if you resolved the issue, I'm glad!