Story: By clicking the exe to play the game you enter into a contract with Gcorp. With your telepathically linked partner, you the player explore this alternate Earth that experienced an apocalypse. Collect the interdimensional artifacts pouring into Earth B, sell them to get rich or use them to increase your fighting ability. Maybe if you collect enough you'll figure out how to close the interdimensional rift entirely. SPOILER: In the end your own party member's fight you the player by using moves that crash your game.

Gameplay: Very open-ended. I'm trying to make it play somewhat like a rougelike or the Elder Scrolls series or even Fallout. You can beat the game in 30 minutes if you know how to get the good items. You can start as one of 4 main characters, so there will be at least 4 endings. I want to make each of the 4 cities be packed with stuff that's easy to miss, but there's also dungeons in the overworld. Your stats barely change with experience points; you mostly "level up" by equipping better weapons and consuming magic orbs (consume the right combo to learn spells). Elemental types and status effects are a big part of battle and there are A LOT of strategies for winning each battle and even completing missions. I ultimately want each playthrough to last about 4 hours, and the game to be very conducive to replaying a couple times.

Synopsis: Basically Contact (for DS) meets Earthbound meets LISA. Mature themes, immature humor, and intellectual gameplay. This game is all about breaking the 4th wall and thinking before you attack. I'm trying to avoid the anime aesthetic as much as possible because I want this game to be commercially viable, but on the other hand I want there to be a mix of disparate art styles in the game as a reflection on the interdimensional rift theme.

Artists, mainly. (hand-drawn environments, NPCs, battle animations, menus, icons, everything no matter how small) Preferably 2. Basically I'll make framework maps with default assets and events, then you create an environment overlay. I'll fill out a Trello database for each NPC, item icon, etc and you can complete them pretty much at your leisure. There's so much original content necessary I'm considering using hitrecord.org. To give you a taste of the style we're going for, here's three of the main characters, Hunter, Psychopath, and Weeaboo: I'm hoping to find someone interested in the project as a whole and willing to take on the complete development of some of the areas in the game, because it's so modular to begin with. We're three guys right now and I think we have events/scripting, writing, music, and mapping covered pretty well. If those are your specialties and you're interested I'd be happy to share more details.

> Create all assets ourselves or contract out the work

> In a year leak a mostly-finished torrent to tease people

> Get greenlit on steam and whatever other marketplaces that'll take us

> Less than 2 years from now complete the game

Let me know if there's any questions! 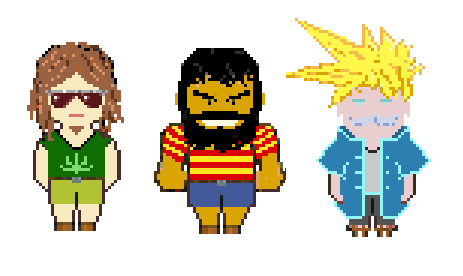 standardplayer
My old project is now a sitcom
18 minutes ago •••

MerlinCross Switz MerlinCross wrote on Switz's profile.
Not sure if you'll see this but I stumbled across your "Open Locker" sprite in a topic. Could I use those?
topic in question
Today at 8:02 AM •••

Eliaquim
Going to watch an episode of The Office and eat something after this little progress!