RMVXA [RSE] [Will Not Be Completed] Downfall FES Chronicles: Proof of a Hero

Synosis
Join Keres, back in the days of his youth and prime, as he explores the island of Líf in search of dungeons to complete in order to stop the mysterious man, Feigr, from conquering the island in this action adventure spinoff game in the Downfall FES series. Gather various tools and equipment upgrades in order to make Keres as strong as he can be so that he may complete his quest. There are 9 dungeons in all to complete across a huge world map, but the mini-bosses and bosses of the dungeons won't make your journey any easier, as they are equipped with an arsenal of abilities and mechanics designed to give you a bad day. 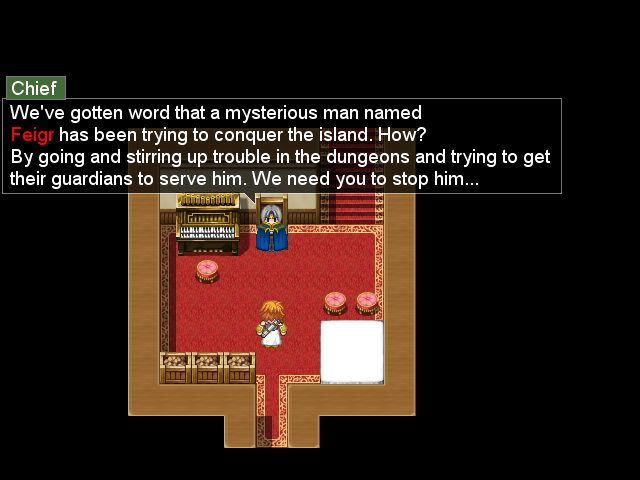 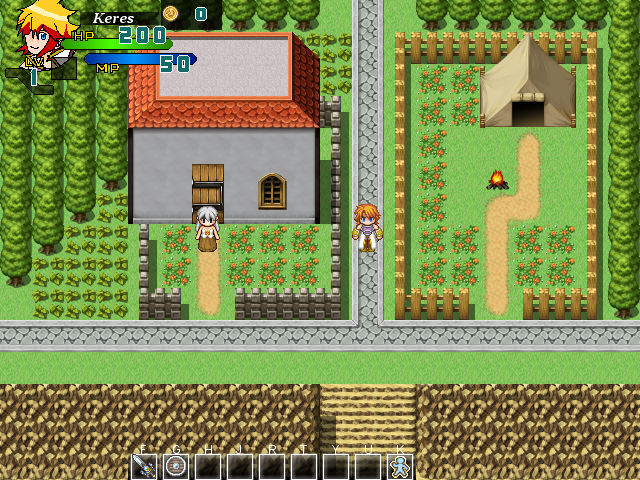 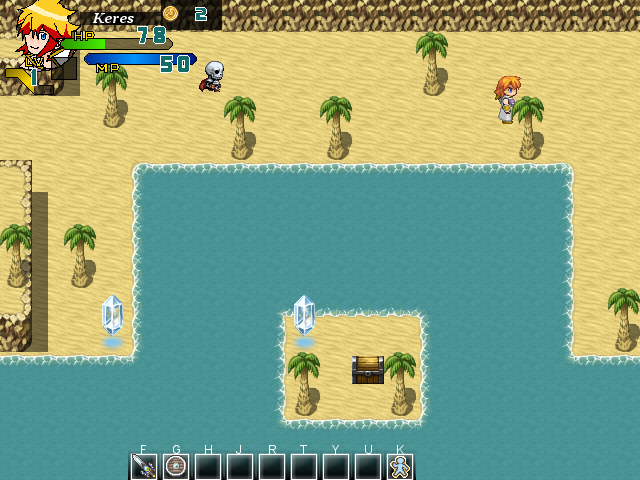 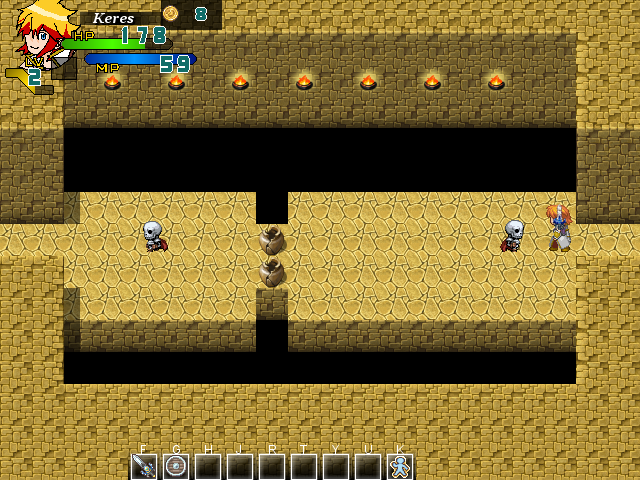 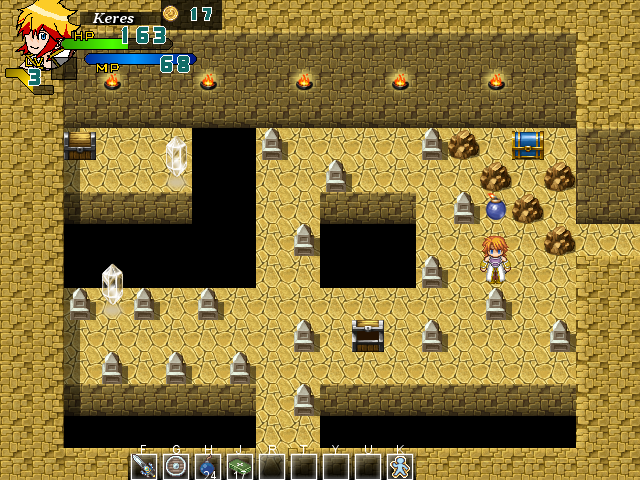 I gave this a shot, and thought it was an interesting idea but maybe not fully realized yet. I do want to point out that I'm not really someone who enjoys abs in rpg maker, so I'm probably not your target audience but hopefully you'll still find my feedback useful.

There wasn't much story introduced so I won't comment on that, but I do think the dialogue was over-saturated with dashes and ellipses. It seemed like almost every sentence had one of those when just a period would have worked fine. Since ellipses often are used to show someone trailing off while speaking, I ended up imagining Keres and the Chief to be teens that were just so 'over it', which is amusing, but not what you were going for I assume.

I also felt some of Keres' comments, mostly up in the Chief's room, missed the mark. I know you were going for funny, but commenting on 'weird hobbies' when the only books on all the shelves were apparently about politics doesn't make sense. If Keres had read the title out loud, maybe it would work, but as it stands I just thought that Keres thinks political books are strange. 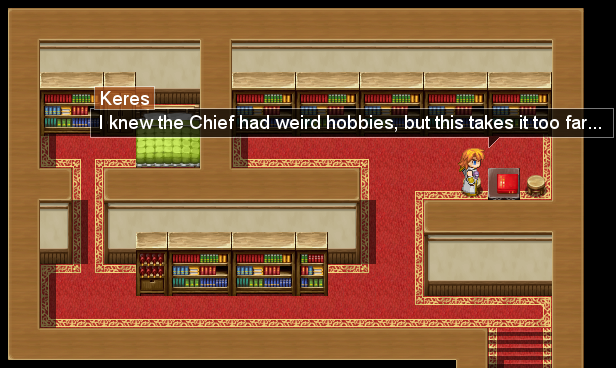 ​
Most of the demo was battles, so I'll focus on that. I mentioned not enjoying action systems in rpg maker, and that's because it takes a lot of work to make them really feel fluid. And unfortunately, yours still needs work. I didn't get any skills or other weapons to use (I'm not counting the bombs since I didn't try to use those in combat), so I just spammed 'F' to fight which didn't make for engaging combat. It didn't help that the skeleton enemies could do 75 points of damage per attack and were over-caffeinated so they could hit me two to three times before I could get far enough away from them to turn and hit them, which meant I saw the game over screen often. Not being able to turn in place meant that it wasn't always easy to line up my attacks, so by the time I could strike the enemies they usually got a few hits in.

Since I got overwhelmed by the skeletons so often, I became very familiar with the game over screen. Which is why I implore you to find a script that let's the player restart from their last save, since I wanted to jump back into the game but instead had to wait for your splash screen to finish after each death.

The boss battles were actually the easiest fights for me, since they didn't strike as quickly as the skeletons. I just kept my shield up for most of the time, and then I randomly seemed to do a shield bash (was that a skill?). The shield bash could drive the boss into the side of the room, and then it was easy to hit it before it could turn and properly attack.

I didn't run into any game breaking bugs, but I did have a few issues with the items dropped by enemies. Sometimes after I'd kill a skeleton (mostly on this map), the item would spawn out of my reach, taunting me. I don't know how you'd be able to fix that, but it's probably something to look into if you're going to have a lot of maps like this one: 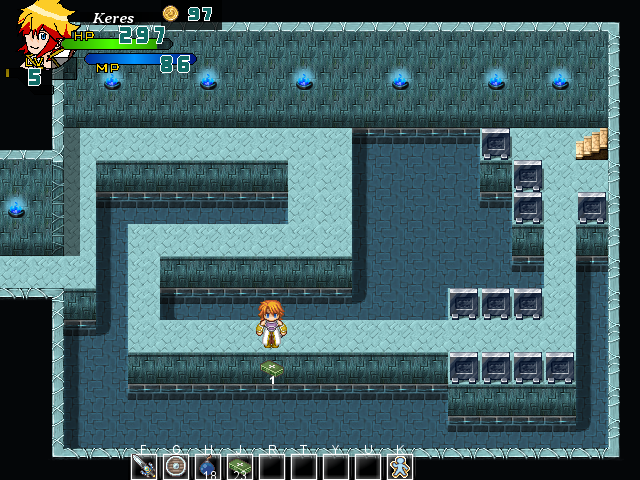 ​
Overall, I could see what you were going for but the demo just didn't contain enough for me to get a really good feel for the game. More weak enemies to fight and more tools/skills to use would have helped with that. It's not bad by any means, but definitely is still in early development. Good luck improving it!

@hiddenone I appreciate the feedback, and I'll address those real quick:

°Actually, Keres and the Chief are teens in this part of the series's timeline, so I a glad it came off correctly. "The Legend of Zelda: Link's Awakening" is the biggest inspiration behind this game, which also didn't throw much story to you at the start. I'll try to lower the overall amount of ellipses as I work on it.
°If I actually included those kinds of details in his comments, the game would immediately enter age 16+ territory, so I kept that bit if info unrevealed for a reason.)
°I kept the number of weapons and tools low in the demo as to not overcomplicate things this early into development (RSE was the reason I even started this project).
°As for the skeletons... All of their stats are as low as it can go (1) so I can't nerf them any lower, and if I raised Keres's base Def or the Def bonuses from armors beyond what I already have databased, I would be making leveling up redundant, which drives me into a weird design corner, as all stats cap at 99.
°Finally as ABS's fluidity and bugs, Falcao no longer works on it, so the system has to be as is, and is the only one I can work with, as I'm not the best eventer, and other ABS systems lacked features for tools I planned on making (such as a grappling hook)
I hope this covered everything.

That explains things, but does create new issues in my mind.

Also, I forgot to ask about why Keres can't run. It doesn't seem like it would be important in battles, but once I've cleared a map I found it annoying that I was stuck slowly walking to the next room. There didn't seem to be any real reason why you took away dashing, so why not add it back in?

@hiddenone I'll also keep all of that in mind, and I think I found the issue with the Skeletons (they had too many copies of Script: use_weapon(X) in their AI, which I have now removed the extras of). I won't be issuing out an updated demo, but am correcting these as I go. And I'll think of something I can add to the plot to explain why the Chief is a teen.

@hiddenone Just letting you know I have fixed every little thing you said to fix: the overabundance of grappling points, the over use of ellipses and other story related bits, the no dashing (I kept it in, but I made a obtainable tool that enables dashing once you get it), and the drops out of reach (as well as I could- I made the spaces where that could happen wider so it occurs less often), the enemy AI, and most importantly I implemented a quick reload if the player received a game over. I also took some time to convert maps to a different tileset.

I have some screenshots from the fixed version so far to show you: 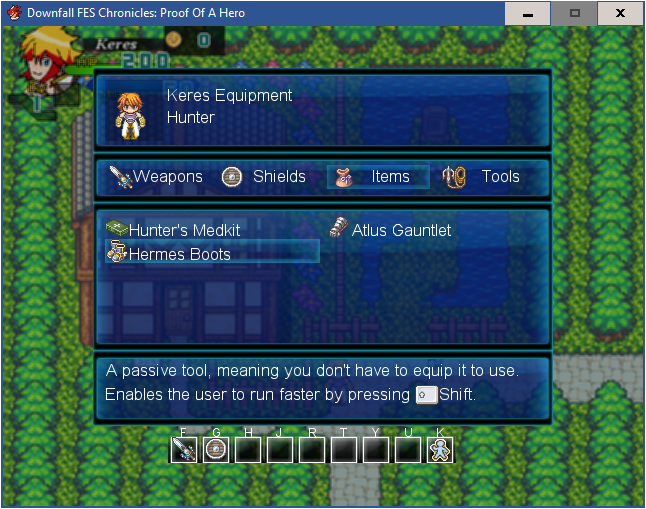 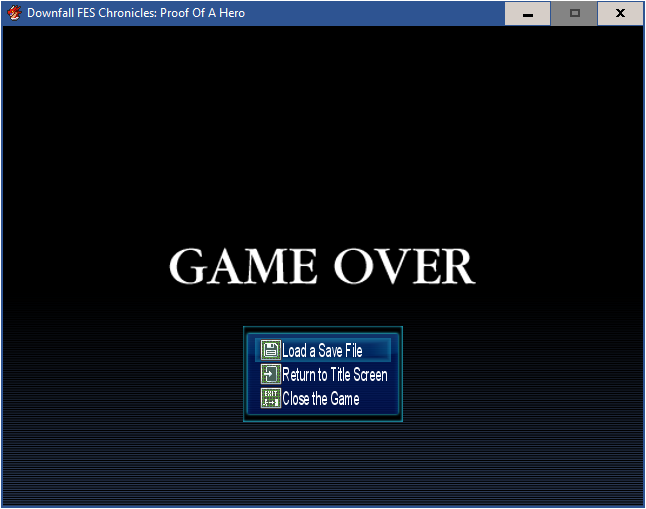 Now to continue with this project- I had taken a bit of a break because I had lost a lot of progress via power outage and my only backup was the DEMO version folder I had backed up... I really should have backed up the main one instead. Lesson learned.

Can a mod please close this? This is a project I don't think I'll ever come back to finishing.

[mod]Closed due to OP's request. You can PM me or another mod again if you wish to re-open this thread.[/mod]