A new primary mission, a new alliance. Let's see what Shlen planned against the Yosha cult. It is time to discover new characters !

New primary mission : Agenusha and the Yosha cult. Will we ever defeat the cult that was the main theme of chapter I ?

In addition, I redesigned the aura skills, for a better effect in combat. The difference between the black aura and the true version Kuroi Kyoujyaku is much more noticeable now.

A small message, to inform that the game is still going on. However, as I chose to work with the last version of RPG Maker MV (1.6.1), I had many things to change in order to have all plugins working with my system.

I also noted that some of the fights were becoming boring, hence I chose to revamp the entire system, making fights more interesting.

YAY! Persevere! You are on that game since so long

After a while, a new update ! Yeeeah \o/

I'm finally done with the rework of chapter I, to go along the last version of RPG Maker MV, as well as making fights more interesting. For now only the 1st chapter has been reworked (still, one chapter equals one complete game), hence chapter II has been disabled for now.

Because of the changes in the complete system, the save files cannot be kept during the update. If you were playing and wants to go back at the point you were, send me a PM, I'll give you a save file placed where you were. Doing so, you'll be able to go on without restarting.

Here are the major changes of this version :
- New : Complete rework of the characteristics
- New : Rework of the battle system with no more random results, but action bars instead
- New : New Actor profiles and new character window
- New : New mission and destination system
- New : Rework of bestiary, with sort modes
- New : Items are now for the party and not for characters
- New : Missions accomplished are listed on the save screen
- Fix : Minor bug fixes
- Fix : Getting stuck while running away from Zestar in mission 23 cannot happen anymore.

And here it comes ! Chapter II has been revamped too, hence everything is now with the new system ! Like chapter I, the save file cannot be transferred between the former chapter II and the new one.

But, that's not all ! Since it is Christmas, the rework also comes with... a new mission ! Mission II.7, the Unbalanced Rift, has been added ! This is a secondary mission I made for some friends, and if you played a certain game, you might recognize the place. But I won't say more, enjoy this mission too !

New version, this time not with one, but two new missions !

Mission II.8, the End of Peaceful Days will allow you to return to Nathrax, the main city, where you didn't go in chapter II yet. Immediatly after the end of the mission will start Mission II.9, Hellish trip, which will literally take you to Hell ! Enjoy the trip 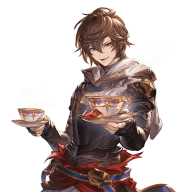 Those custom tiles looks dope~ I probably need to up my game and practice pixel art too, good job man!

How did you setup the auto update feature?

I created the launcher myself with Visual Basic .net. The launcher compares the version file to the one online; if there is a new version, the launcher downloads the new exe in a temp file. The temp file is then executed to replace the launcher exe.

For the game itself, same thing, comparison of version files, and downloads according to the patch files on the server.

A new secondary mission, where we visit Yureka's new planet. A bit of infiltration, enemies we knew, and a few things are available in this mission, have fun !

Here we go with a new primary mission. We'll see again one of the android of the cyborg army we had in chapter I. But, a few things have changed

An update sooner than expected. Here we come with a new secondary mission and a new primary mission. Have fun

A new secondary mission, with a strange creature to defeat this time. Enjoy ~~

New secondary mission, explore the city of the cult of The Life, and see what happens

Here we come with a new mission, the trial of The Death. Have fun touring on an island with several hazards. This mission is a bit longer than most mission, as it takes me 1 hour and a half to complete.... When you know what to do

And i'll put the picture of one of the opponents here :

If you want to know what this thing is, try to reach the end of the trial

Kawaiiii critter~! ergh.. I mean, nice that size on my screen. (Might be aesthetic sensitive because DC use my mouse arm as a pillow now that we are back home ^^ )

Even though I have a new job, hence less free time, I can still work on the game. So here comes version 4.09 with a new secondary mission : The forbidden weapon !

Avery
Monday morning, and the sudden message: Hey, can you set up a full second lesson about pixel art till tomorrow?
23 minutes ago •••

TheoAllen
No one:
Steam game achievement: "Die 100 times in easy mode".
48 minutes ago •••
CyrusBCastle
I want to learn Javascript to create a custom menu, but I don't really know where to start.
Today at 2:12 PM •••