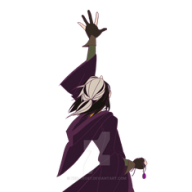 So... this one is going to be a bit different, as far as asking for help.

See, in my game, I am trying to create a system where I can upgrade current weapons to make them stronger. I technically already know what I'm doing, though I may be doing things far more complicated than need be... heh...

But what I am asking is not what to do but the formula I should use. Ah... technically speaking.

Here is what I mean:

If I would like to upgrade a weapon, I have the original weapon here- 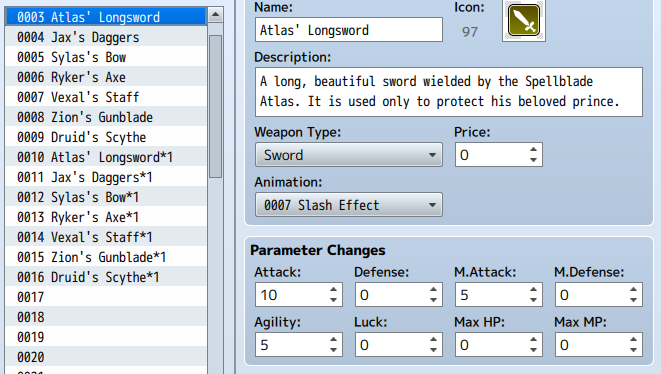 And then would have the upgraded weapon "Atlas' Longsword*1", but with higher stats. I plan to have players be able to upgrade their weapons about 9 times, so what would be the best formula to figuring out how to "evolve" weapon stats for each upgrade?

Thank you for any help provided~!

Progression formulas, like level-ups, weapon upgrades, monster stats by area, etc., tends to be a big jigsaw where any piece can work as long as it's reasonable, but the other pieces need to be carefully fit into place around it.

If you already have the other parts done - for example you've set your character stats by level, and you have your monsters in the game already, then the best way to figure out the power progression of your weapon upgrades would be to estimate how often/quickly the player will be able to upgrade their weapons, and calculate the gap in power required by the weapons to compensate for the difference in monster power vs. the difference in innate character stats, and use those figures to come up with the stats that your weapon should provide.

For example, if the difference in average monster power between the first stage of your game and the third stage is 50%, and you expect the player to level up 5 times during this span, providing a 30% innate boost to stats, and you expect your player to upgrade their weapon once, then the stats on the weapon in its second form, over and above the first form, should provide a 20% boost to your character's TOTAL power (which will absolutely mean more than a 20% boost - it might mean the difference between +15 ATK and +25 ATK, for example).

If you don't already have the other parts done, then you have more freedom to play around with the numbers here, and you can fit the other pieces into place later. Generally you don't want anything too absurd as far as the upgrades go, in order to avoid a balance pendulum that swings too far with a single upgrade. If all of your equipment can be upgraded, something along the lines of +25% to +50% over the previous form is usually good (with lower percentage increases in the final upgrades due to compounding). If only the weapons can be upgraded, +50% to +80% can probably be explored. You say you want about 9 upgrades, but I don't know the length of your game. If your game is very long (30+ hours), you could probably play around with even higher numbers than these, since I expect there will be much bigger gaps in innate character power as well as more stages of your game where monsters will be getting more powerful on average.

I think I will play around with it, but I'll leave this "unsolved" just in case other people want to give their opinions~

Because of the nature of this query, and because it's engine neutral, I think you will get better feedback in Game Mechanics Design.

I'm rarely understood when i come into balancing threads but for some masochistic reason i cant stay away.

the formula you're looking to develop for your upgrades is relative to the power of the monsters at the given time of the upgrade. if your monsters do not steadily grow more powerful in a predictable curve your upgrades will not be able to stick to a single formula unless you want some parts to go from harder to easier to harder when the weapon upgrade doesn't suit the monster upgrade. if you want combat to stay relatively the same yet become more complicated with additional spells/skills you'd want your weapon power curve to stay close to the monster health curve while accommodating for the additional damage output capability of learned skills and abilities to maintaining relative distance from the monsters health and healing abilities. If i were you, id stick to a single formula and check the monsters in the areas i plan to make each upgrade available to make sure the damage to health ratio is what im looking for and fix any deviations from the formula.
You must log in or register to reply here.
Share:
Facebook Twitter Reddit Pinterest Tumblr WhatsApp Email Share Link