All of these are just perfect! You have put a lot of time and effort into them it seems.

Snakes really do have an uncanny nature of popping up where you least expect them!

​
And yes I had recently taken to hiding my cookies in hollowed out rocks... Have I discovered the secret of snakes?!

I love them all. The snake looks like it's stuck in an oversized almond or seed though. Which in a way is amusing.  It's like some odd take on the worm in the apple.  I did just think of something when thinking of the typical antlions of RPG deserts.  Soldier Ants.. but in your anima style You have the perfect sand/desert warriors. and their pet.. the Lion headed bug like thing aka the antlion.   Just food for thought.

@DarkstarMatryx Now all I see when I look at him is a giant walnut, might have to fix that...or maybe I won't... The more tasty thought food the better, my brain has begun rolling; just hope I can catch it


@Goldschuss Look what you've done to him! 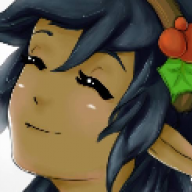 These are incredible!! Very detailed and well made. There's so much personality to it too. : D 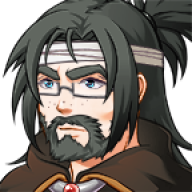 Although the style's not quite my thing, I really love some of the designs here. How would you feel about it if I did up more pixelated, RTP-ish versions of a few?

@AlephNull My style is not for everyone, especially since its not RTP friendly. Feel free to have a go, I'd be interested to see how they turn out. All I would ask is credit for the original design.

I'm fine using your graphics with the RTP

@ShadowHawkDragon For your approval then: first test run of the watcher drone.

Or as I like to call it, the Death Pokéball.


If it seems extra pixel-y, that's because I've brought it down to about the size of a standard SV sprite's head. Anyway, figured I might as well run it past you before going any further. (I'm working on about five things at the same time anyway, so...) Thoughts?

@AlephNull looks good, the size to human ratio is how I imagined it and I like how you did the orb-eye thing.


Go Pokeball! Boop, boop, BOOM!
I can't believe how long it took me to see that likeness... 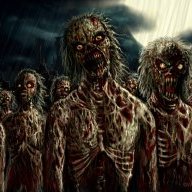 These are some very goods battlers. Would it be okay if I used these for the game I'm starting?

BaconXCake said:
These are some very goods battlers. Would it be okay if I used these for the game I'm starting?
Click to expand...

He said anyone can use them, non commercial or commercial, just credit him

Solis said:
He said anyone can use them, non commercial or commercial, just credit him
Click to expand...


Terms and Conditions:
Free for non-commercial games. Credit is appreciated but not necessary, just don't claim them as your own.


inspiredtangle should also be credited for the use of designs based on her artwork (indicated by the file-name prefix 'inspire-')
Free for commercial use on the condition you sell me your soul! Scratch that, credit and prior notice is all that I ask...


Sharing of these battlers and edits is allowed but please link back to this Topic.


Edited Tuesday at 9:39 AM by ShadowHawkDragon

@BaconXCake Yes, just as @Solis says, you may use the my battlers, I would even be happy for you to do so


In the case of a commercial game, a PM with further details (such as title and links to any threads/websites) would be appreciated (its more of a courtesy thing, I won't bite)


Hungry lizard passing through, make way or get eaten!


Greedy lizards that love to eat. They rapidly adapt to new environments evolving based on their diet.

Salamander due next mid-week

The Antima; once ridiculed as the weakest members of the Anima Union. They have since declared their independence and rights as a species forming mighty colonies!


Here is the first of their kind to make an introduction... Weavers, the unsuspecting spiritual beacons of their people and telepathic masterminds!

Now we go back to our Egyptian beasts with a phoenix and sphinx... Well, technically they hail from Greek mythology but who's keeping track?

I love the antima and the sphinx looks like it could be a Dandilion with a little work. hehe.  The Dunedweller looks great with his bit of indigestion.

@DarkstarMatryx I believe you mean a dande-lion (half dandelion, half lion), or perhaps a dandy-lion (well-dressed lion)  , either way added to my list of ideas.

As this is the last week for this themed month and I've been a bit under the weather since the weekend, this week will be mostly a tidy up.


Bring on the heat!

He's back and this time he's hiding in slightly more rock like nut, the original due to the comedic factor is still available.

He's the coolest guy in town, the most badass cloud to ever wear sunglasses. The only problem, without ears those fancy shades of his just keep dropping off!

Guardinthena
Welp, finally posted some images to Twitter that I meant to post last year... Better late than never, right?
Today at 1:10 PM •••

The Mighty Palm
Going for a spooky theme with my animal crossing home/town. All I gotta do is find that one gravestone recipe out of hundreds for my cemetary ; u;
Today at 11:10 AM •••

The Stranger
Asthma has been getting worse because I can't get my paws on a brown (preventer) inhaler. Been without one for over a week now. Struggling to breathe sucks.
Today at 11:01 AM •••

Guardinthena
I'm wondering, what if I took the time to make a Bee Hive mirco-biome. It sounds cute, and be a home to that hornet monster, but would anyone actually use it?
Today at 9:55 AM •••