"Show Picture" command not working (after "Play Movie" fails too)

I had a game that was finished, published, and working just fine. It had three videos at the end: a good ending, a bad ending, and credits. But then I made some changes to earlier parts of the game, that seemed totally unrelated to the video files I had, only to realize that my video files were no longer working properly. You can see that whole discussion here: https://steamcommunity.com/app/363890/discussions/1/3057365873443606071/

Caethyril, the Steam user who displayed a remarkable amount of patience and helpfulness with an RPGMaker noob like me (thanks again!) suggested that I replace the videos with a series of images and/or text.

So, I replaced the good and bad endings with placeholder text for now, and I created four images to replace the credits. However, when I playtest the game and get to the point where the credits should be, the screen goes black, the music plays, but no images show up.

When I go into the Event Editor and Test each "Show Picture" command, each picture shows up just fine. But I can't get any of them to show up in the actual game. This has been frustrating me for a long time, because it is preventing me from posting an update to my game to address some of the criticisms I have received. Can someone please help?

EDIT: I now realize that Caethyril was suggesting I try the scrolling text command. I have not tried this command before, but I will try it now. However, I may need to use images for the good and bad endings, and I would still like to know if anyone knows why the images weren't showing up for the credits.

EDIT 2: Something interesting just happened. I created the scrolling text and put it before the series of pictures, just to test it. When I playtested the game, it showed the scrolling text, but this time, the pictures showed up afterwards! Why weren't they showing up before? 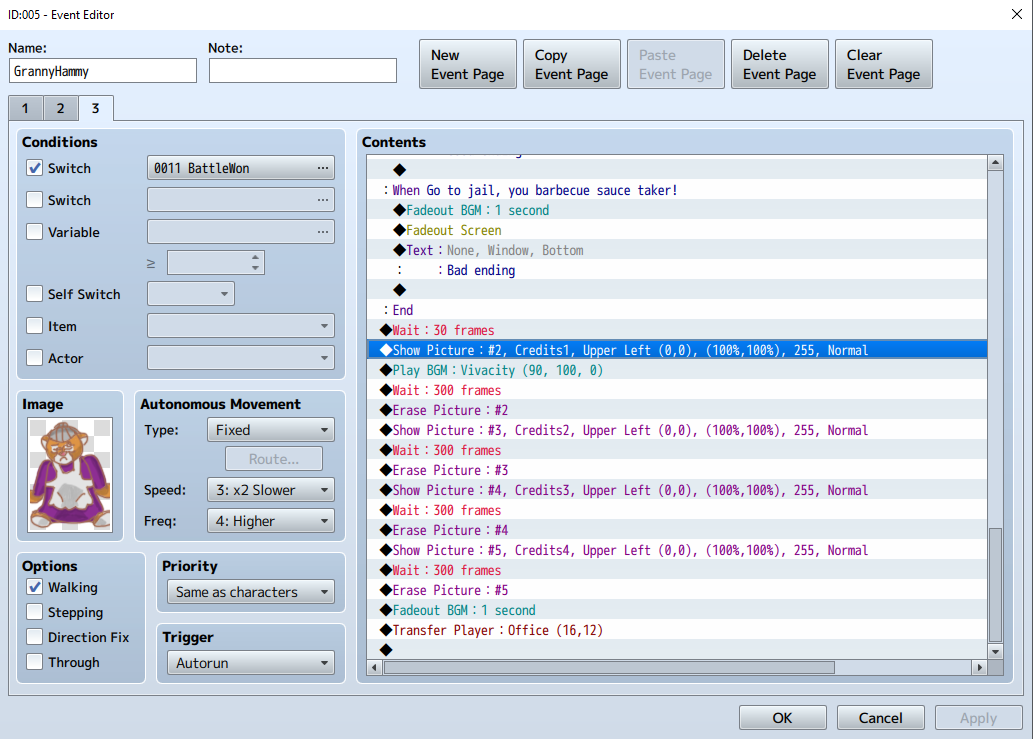 I figured it out! Fadeout Screen hides images as well as the map. I used Tint Screen to hide just the map, but not the pictures. Also, I added Wait commands of 30 frames between each image, and instead of making each image last for 300 frames, I put text in front of the images so that the images change when you press Z on the text.

That's probably the same issue you had with your original video, also.

ATT_Turan said:
That's probably the same issue you had with your original video, also.
Click to expand...

I'm not sure about that. With the videos, it would show the very first frame of the video (or maybe the first few frames) and then freeze on that frame. If the fadeout was causing the problem, wouldn't the screen have been black?