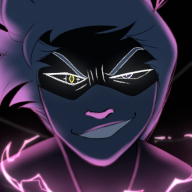 Might as well make this too in case it's a lot simpler than my other script-fix requests.

Thank you SO much in advance for anyone that could help me out on this- getting this to work has been a migraine. Please forgive me if I'm missing a lot of key details- I've never had to request a plugin before. Let me know either via this thread or via Conversation/PM if you need more details.

I'm looking for a Plugin that would allow me to have a text input scene that saves the player's answer/text to a variable parameter.
[BEFORE SENDING OTHER PLUGINS: I'm aware of all the existing plugins similar to this. However, none of them are compatible with the other scripts I'm using, and none of them are quite right for what I need. THIS script is the one I was working off of, but it's incompatible with ALOE_PlayerNotepad. It has most of the base coding for what I need, though, if it helps to have a basis to work off of.]

I'm working on a script for making Input Scenes, it's mostly done here Terms of use: Free for Commercial and free use as long as I get some credit for the script. How to use: Screenshot Changelog: Download Bugs: ToDo: You can... 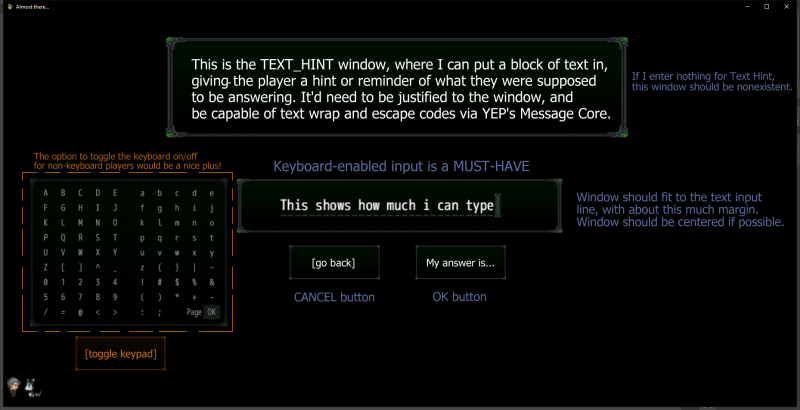 !- Lets the player use the keyboard
!- Like in Scene Name_Input, I want the player to visually see how many characters they can put in [helps with riddle solving]
!- Saves the player's input string to a Variable
!- Text Hint is capable of reading escape codes a la YEP_MessageCore.
!- Lets me use a plugin command to change the hint text to whatever string in " " I want for that particular input scene call.
!- OR! Allow me to change a VARIABLE to a String with a change variable command, then have the plugin fetch whatever X variable has for the Text Hint, and show it in a window [or by itself] above the input box, centered. Either Plugin Command or Variable fetch could work, but the variable might be less clunky for the sake of REALLY long plugin commands.
[Because sometimes I'd need the Text Hint to be a whole Riddle that the player just heard, so they know what they're answering. It feels clunky to have to type a whole riddle into a plugin command's Text Hint parameter if the plugin could just fetch the contents of a variable instead.]
!- Plugin command parameter to change Max Characters
!- OK/Cancel Buttons with customizable text [Cancel Button would save whatever the player had already entered, and exit the Input_Processing.]
!- Toggle-able input keypad [not super important, but would be nice]
- Blurs the background like Name_Input [not important]
Click to expand...

Here's the final kicker and why I'm requesting this be custom-made: I'd need it to be compatible with these core scripts of my game:

I don't believe there's any others that could mess with this sort of Input_Scene, but here's my full list just in case: [CmdInp is the plugin I'm trying to replace that doesn't work with ALOE_PlayerNotepad, so ignore that one being ON.] 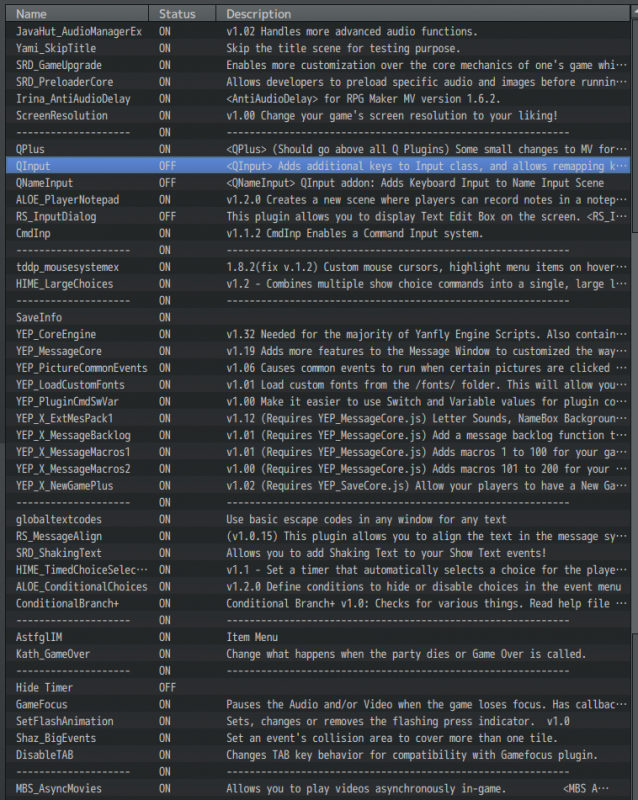 Thank you SO so much for anyone that can help. This Text_Input scene is a huge core aspect of the games I'm making and the point-and-click system I'm working on, so if I could get this squared away, it'd be a lifesaver.
Last edited: Jul 16, 2020

I just want to say, this is a really nicely-defined plugin request. You've obviously put a lot of thought into your requirements, and have taken the necessary time to explain things. Such a nice change to the usual "here are 4 words and if I say the title says everything I won't need to explain anything else and you'll know exactly what I mean" type of requests that frequently come through.

MushroomCake28 said:
You are not allowed to offer paid work in this section of the forums. If you want to offer paid work, please do so only in the classified section. Please remove your offer to pay from this thread. Thank you.
Click to expand...

Ah sorry sorry, fixed it right up! Missed that rule- thank you for the correction!


Shaz said:
I just want to say, this is a really nicely-defined plugin request. You've obviously put a lot of thought into your requirements, and have taken the necessary time to explain things. Such a nice change to the usual "here are 4 words and if I say the title says everything I won't need to explain anything else and you'll know exactly what I mean" type of requests that frequently come through.
Click to expand...

Hah, thanks my dude- didn't want to be too vague or too wordy. I want to make this as easy as possible for any potential scripters! So I'm glad it seems well put-together

@VTDraws I can also move this thread to classified if you want to offer to pay, or you can make another thread there.

MushroomCake28 said:
@VTDraws I can also move this thread to classified if you want to offer to pay, or you can make another thread there.
Click to expand...

Have you tried using the built-in name input scene plus SRD's Name Input Upgrade? Since it works on an actor's name, you'd have to create a dummy actor in the database to hold the output of the text input box, but it might be worth a try.

Solar_Flare said:
Have you tried using the built-in name input scene plus SRD's Name Input Upgrade? Since it works on an actor's name, you'd have to create a dummy actor in the database to hold the output of the text input box, but it might be worth a try.
Click to expand...

I did indeed try that! I've used every combination of different Text_Input-type plugins, but all of them had some weird small issue that made it unusable. I actually started out with using a dummy character name and using Name_Input and such, but it got a lot more cluttered than just reading a variable. I think there were also character limitations for the names.

Bump! Still looking for candidates to work on this if anyone can!

HUGE Bump!!! The original post now has a video demo of a plugin mock-up! Still really need to find someone to work on this- I cannot continue base game development until this is squared away.

Reporting the thread as closed and finished, got a custom-made script that pretty much does what I need it to.

Philosophus Vagus
How can a society function with an entire media establishment that is complicit in publishing partisan slander and easily disprovable lies right alongside each other with no accountability whatsoever? After I live through it, maybe I'll make a game based on it. The level of dishonesty at this point just astounds me though.
2 minutes ago •••

Candacis
If you download a resource, be it art or plugin, please thank the creator for their time. We are all guilty sometimes of just grabbing something without commenting. Now is the time to go through your credit list and visit the threads/site where you got the resource from and leave a heartfelt thank you!
Today at 5:46 AM •••

LunarFlareStudios
October is officially here. I'm hoping to get a call from Spirit Halloween soon. It didn't happen today, but I've got to keep my head high.
Today at 5:35 AM •••

Alador
So, what is this "Inktober" everyone's speaking about? Because apparently, I have no idea what happens on this site...
Today at 4:24 AM •••