cleaning up Nel's abilities and locking up these tiers. In Skyward you must study sets of skills before you can learn them.

+ Spells from each elements were broken down into 4 tiers, initially.
+ Functionality and components required to learn them implemented.
+ Spells can be learned by finding or purchasing scrolls, and grinding specific enemies for elemental spellstones and mana shards.
+ Mastering and unlocking elemental spells require mana shards and a book designed to study the chosen spells.
+ Books and scrolls can be purchased or looted.
+ There is a fifth tier of mixed elemental spells that may be unlocked by mastering certain set of spells and completing the main campaign.

Spells in Skyward are complex studies, a Magus must craft their spells before they can memorize and cast it at will. Most books can be acquired fairly from all around, however some of the most obscure ones can prove challenging to get. Once the spells can be learned, they need mana shards and spellstones to channel the elements and inscribe the spell into their soul, creating what they call a 'bond'. Every individual has a limit to how much they can absorb and inscribe into their souls.

When a person is considered a Magus it is often because they are gifted, can learn multiple elements at once while the average human can learn one, and master powerful spells that others cannot. Nel has an unusually deep soul capacity allowing him to tap into most elements and beyond.

Check out the now available website at www.rehmlokarts.com and the release of my Devlog HERE with our very first official update on what's been going on with development this year!

Make sure to hit that subscribe button, your support will come a long way! Here's Nel failing at survival 101, such as taking a potion out of your bag...

this is.. this is such an amazing looking project! Graphics are amazing, characters seem cool...
definitely following, I'm excited to see where it goes!

I appreciate that a lot @Mirpono, I sure hope you enjoy the demo too!


Another fused and belated #wipwednesday and #screenshotsaturday, this month is hectic and filled with new challenges! Let's discuss fishing and the mastery value, check out the devlog for more!

Fishing is a talent that is entirely optional, if invested in – it unlocks new gameplay opportunities, it contributes to the Mastery Value, and provides more lore.

Sadly, I do not have enough hands with thumbs to throw up for this! INCREDIBLE JOB!!!

@Jayje you're amazing! thank you!!

#screenshotsaturday When darkness fall...I hope you'll be pleased to know that the demo will be released in August!

The battles look amazing. I'm awed that you managed to do that with rpgmaker!

Thank you @illyana !! Your words and interest strengthen this project!

Hello friends! I want to apologize for the recent delay with being public, I was having a major family emergency to cope with. This doesn't go without saying that work is never halted as I hope you may already know, in the next 48 hours I will be detailing on our blog's august update, facebook and here the very last and big implementation of the game (crafting is IN!!! Say what? Hundreds of recipes will be at your disposal!) and how the game world progressed with many new maps and content. My health is also A+ now, which is great news (at least for myself haha). For anyone interested in helping the game grow the last testing build will be sent in a week's time before its public release too.

The demo and kickstarter's pre-campaign will still be rolling out this month as previously announced. We have a third musician recently joining the project (a good friend of Toshi and Drew) and the soundtrack is being worked on as I type this with a real instruments/orchestra/vocals. It's going to be HUGE! I can't wait to share all of it with you shortly! Keep an eye out for the update!

Something strange lies in the fire...WIP I hope you like it, this is an alternate realm where things are rarely what they seem, feedback's appreciated!

#screenshotsaturday Hiegholm's Enschen Valley! Is it really another Aether Calamity, is the spirit realm being connected with the living realm again, or is it something else this time...

#screenshotsaturday What do you think Nel's experiencing in Bartram's Estate? Find out in the upcoming demo and campaign! Don't forget to check the website and more news at www.rehmlokarts.com too! 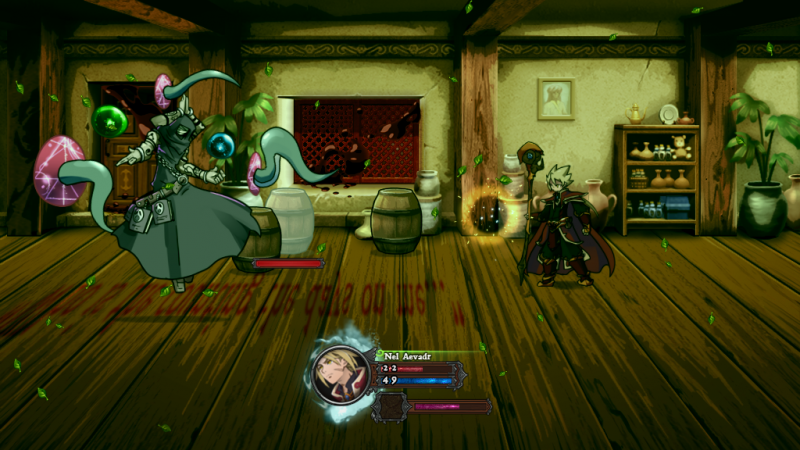 300 likes and follows on Facebook! I can hardly begin to show my love and appreciation to all of our fans for supporting the work behind the game, this is the start of an amazing journey through Ehthyrion and the spirit realm, I hope to see you all enjoy the upcoming demo and campaign in September! I will keep my ambition and dedication going to bring that experience to life, you are the fire behind that light that keeps it up day and night!

Thank you, a thousand thank you!

#screenshotsaturday on a Sunday, victory screen is in and alas fully functional! There is no longer 3 pages of results and all of it is beautifully animated thanks to Pivoo's help! Onward we go! Keep an eye out for this month's massive update and wait for it...some original soundtrack composed by Toshi Clinch, Drew Zaremba and Aaron Hedenstrom!

#screenshotsaturday Greetings Ethyrians! A bit late to the party, it's been a busy week with the new particles engine and dozens of bug fixes! I hope you enjoy it, another update is coming up soon with the demo release and much more! Stay tuned friends!

Additional credits to @pivoo for his relentless efforts to make these particles a possibility and amazing patience for introducing it into our game before its release, please take some time to look at his plugins found there and soon, you'll be able to create your own particles for your games too: http://pivoo.me/

Subscribe to help this channel thrive! See you soon mortals!

The trailer and the latest update are here! Don't forget to subscribe on YouTube and our Newsletter to get information and releases ahead of everyone else! http://www.rehmlokarts.com/index.php/2018/10/18/update-0-2-771-and-new-official-trailer/

Head over, subscribe and get ready for October 27th!


Do you have a YouTube channel and would like an early version to playtest there? If you do and are interested please reach out to me!
Last edited: Oct 19, 2018

New update Ethyrians! The demo will be slightly delayed for a better players experience, please keep reading for more information, a new release date will be made available in November! Make sure to subscribe to our newsletter to stay on top and get early access to Alphas, Betas and all demos.

We got our first snow in Montreal! I hope we get to dodge some serious snowstorms this year…ha! Who am I kidding, we are so doomed! On a better note however; I’ve been hard at work with a lot of polish finalizing most core features of the game.

I am in a phase where a lot of my time is used to polish the adventure as a whole and all that surrounds it not only for the demo release but a smooth transition into BETA in the months to come. As seen in a previous update, the demo got delayed so it feels consistent with the intended final release of the game. How I originally built the demo was with certain mechanics and scenes being skipped to showcase most of the game-play available within a whole adventure, players didn’t have the ability to connect with the story due to flashbacks being hidden, cutscenes made shorter and they were able to play a mid-game dungeon right after leaving Iselwood offering 2+ hours of time spent in the game with little context and background.

The original public demo that will be released before Christmas will be slightly shorter, but the intro will have all playable flashbacks in Aogwel’s Academy (magius school where Nel originates from), interactive NPCs and will be focused on exploration rather than skipping through the mid-game dungeon.

For whoever’s been following progress since the beginning of the game, you may have noticed that the turn order display that was in the prototype was hidden. That is now back and will dynamically display for the current battle round and the upcoming round at the top of the screen, a video will be made available soon showcasing the entire system.

The resonance mechanic which is also part of the chaos/Sinistris mechanics, is a bar that fills up when participating in battles; all actions in battle will increase your team’s resonance by 1 point. Resonance allows for powerful team combos, summons and the use of chaos arts. Using resonance also comes at a price however, and that’s increasing your vulnerability to Sinistris, a feature that unlocks later in the game. More on that soon!

Chaos is a both a global and individual statistic; the global chaos is the world state and is hidden to the player. There are no ways to tell how much global chaos you’ve accumulated but certain hints can be found when interacting with your environment, exploring and experiencing unexpected events. It can dynamically change the effects that the Aether Calamity has on the world and its inhabitants (origin war, subscribe and follow the updates for all story reveals in the future!).

Individual chaos can be seen and monitored through the game menus, it directly affects the relation that every team member has with the Aether Calamity, the world and their mental states. High chaos makes people vulnerable to Sinistris.

Sinistris “To Some Extent” Explained

Sinistris is a sickness that has no cure known and infects the soul of a living being. The last case reported was over 200 years ago during the Origin War when rifts were opening and connecting the Spirit Realm with the realms of the living. Its real origin is unknown and the fact that any infected being either suffered an agonizing death, turned into a suicidal abomination or has become a vegetable made it impossible to study concretely. Some Magius and Magistrates have attempted to dissect the bodies of the infected but they couldn’t find any physical cause to the sickness. Some rumors go as far as describing it as the end of everything that is and will be, meaning that it destroys the soul breaking the cycle of life leading into absolute nothingness.

I hope to see you soon, don’t forget to follow our newsletters to get your hands on the demo before everyone else and more!

#screenshotsaturday The path to Nel's lair, what do you think you can build there? 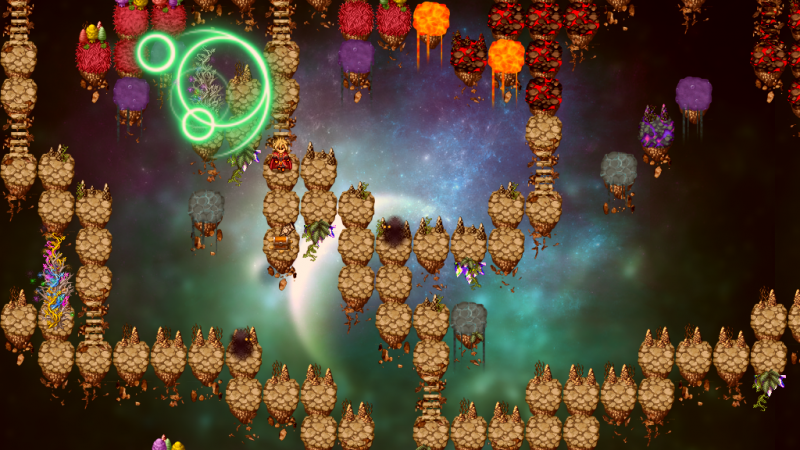