Galv has made a nice plugin here, which allows you to make a unique title screen for your project.

I would like to request an additional feature(s) for this plugin.

A plugin command(s) that can (1)modify "fileName,xMove,yMove,opacity,z" during gameplay and (2)remove Layer Graphics.

I want to be able to have a dynamic Layer Graphics as the game goes on (for plot reveals, etc.) similar to what Yanfly’s Dynamic Title Images does. I've tested the two and the two are compatible, YEP_DynamicTitleImages.js must be below GALV_CustomTitle.js

Below is a video of the game I'm making and what I've managed to do and hope to further achieve using Galv's Custom Title plugins and Yanfly's Dynamic Title Images.

As you can see at 0:51, Did you notice the Background Image change in the Title Screen?(That was done using Yanfly's DynamicTitleImages.js) However, for Character Carousel image which was achieved using GALV_CustomTitle.js, It would've been nice if I could change/turn off the Layer Graphics midway into the game for some plot reveal or to just fully show the new Landscape background image. But to do this I would need a plugin command for GALV_CustomTitle.js that can change/remove the Layer Graphics during gameplay. 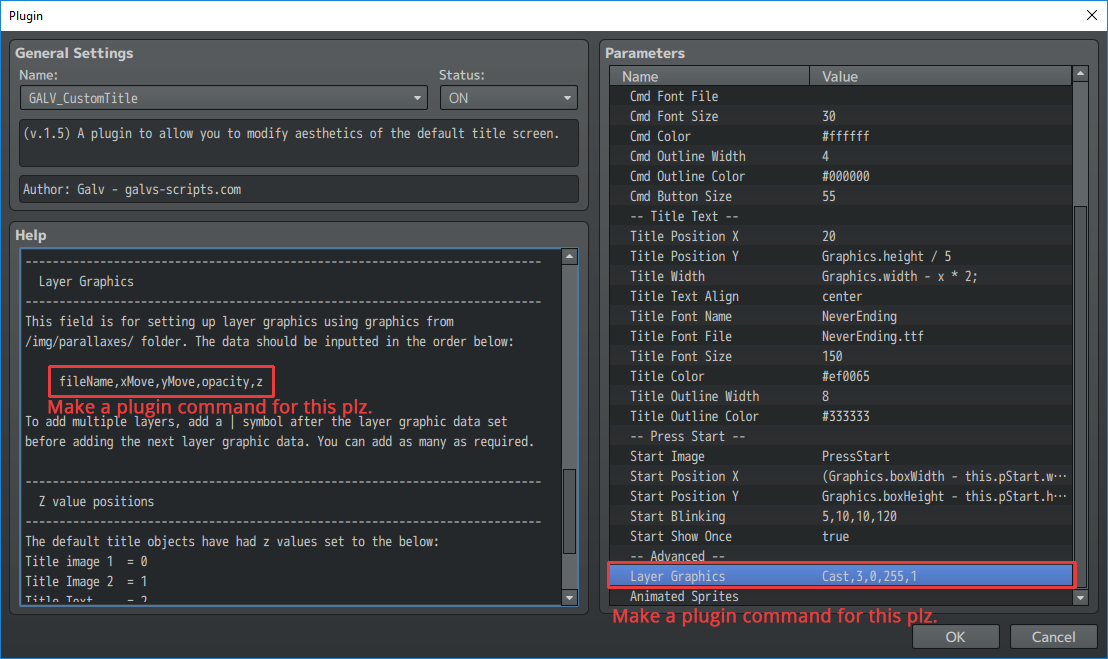 Here you go To remove the layer graphics just use the plugin command:

Code:
or you can set the graphics layer just like normal:

Somehow I was kinda expecting you'd fill out this request to, haha.
Well thanks again, and I've tried it and yes it's working as intended without a hitch.

But if I may, can I ask a feature to be added for this? Can you make the change made by your add-on plugin persistent?

What I mean is, only whenever the player restarts the game, the LayerGraphics will revert back to whatever you have set originally in Galv's GALV_CustomTitle.js.

If it helps, I'm thinking it's very similar to what Yanfly's plugin; YEP_DynamicTitleImages.js that I mentioned earlier does. Any modifications done by this plugin to the title image using it's built in plugin command, persists even if the player; does not save, loads another savefile, closes the game.
Last edited: Mar 8, 2019

Done. I made a plugin parameter so you can choose if you want persistant layer graphic changes on or off.
I have edited my original reply.

Thanks for the quick reply, and for two threads in a row.
I tried it however, I am getting this error: 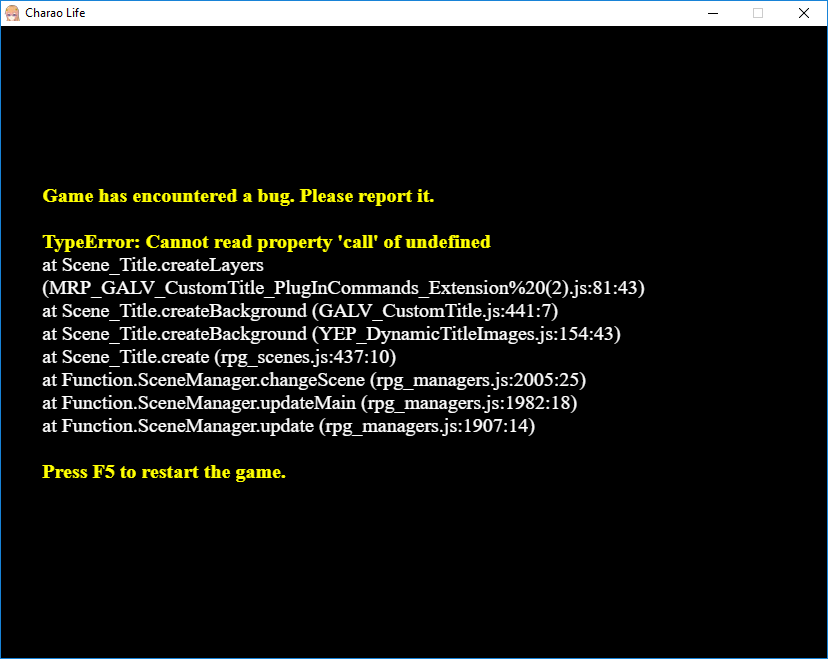 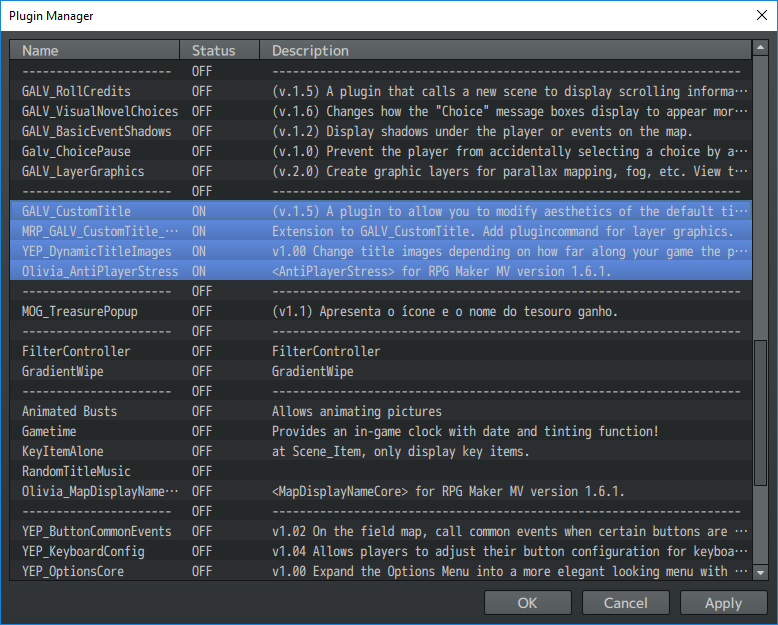 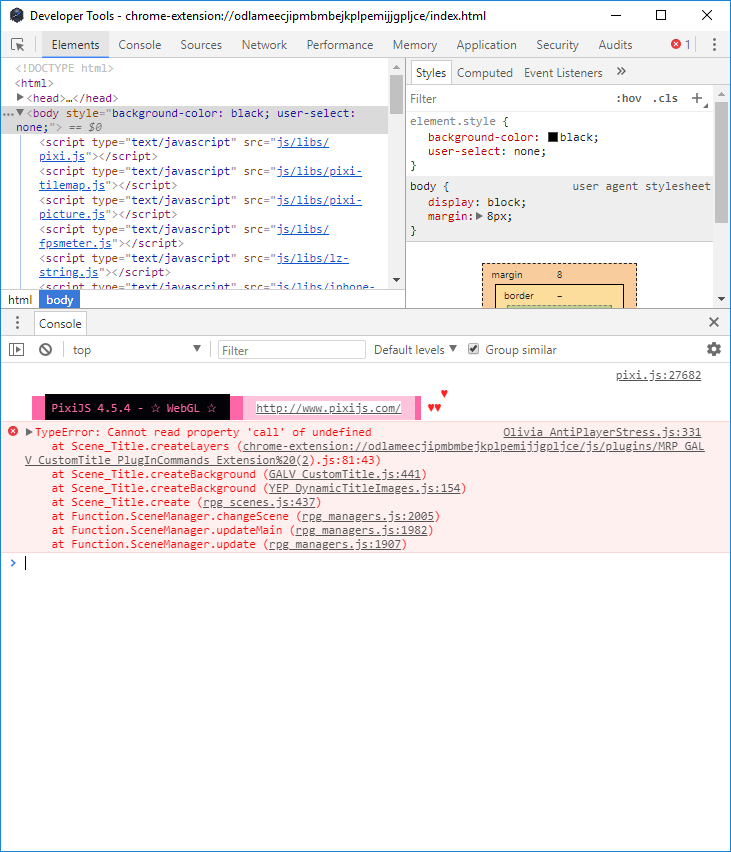 I have tried turning off all other plugins and only keeping these four on in this order. Still, the error occurs.
If it helps, i'm using Olivia's Olivia_AntiPlayerStress.js plugin, that's why the error screen looks different from usual. What it does is just displays more details into the error screen.

Edit: woops forgot to include the error screen itself, fixed.
Last edited: Mar 8, 2019

Sorry, that was a stupid mistake from me. No idea how I did not catch that. Should be fixed now.

Thank you once again, I tested it and everything is perfect.
That's two threads in one day you helped me in my request, you are a saint!
Will also inform Galv about it.
Last edited: Mar 8, 2019