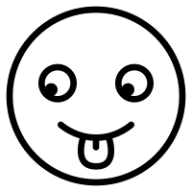 Hello! First post here, sorry if it's not in the right place (I searched for YEP_EquipCore, read many, many posts/topics until I decided to create this one)


To make it so, that an equipment (say, a weapon, in this example):
-has a base 'str' requirement value of 25;
-'punishes' the character using it, if their 'str' value is below 35, by subtracting the difference between 35 and 'str' from current 'dex'
I'm using YEP_EquipCore and YEP_X_EquipRequirements, along with some other non-Yanfly plugins:

No issues so far using custom parameters (QuasiParamsPlus), here's a notetag for a weapon: 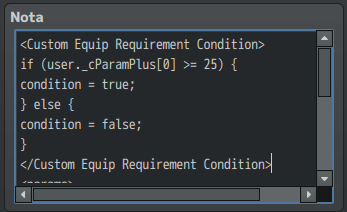 Yes, it reads that _cParamPlus[0] and checks, all fine. No conflicts so far.


This solved a little question I had where I wanted the base value of a custom attribute. Instead of using "user.xyz", I used "user._cParamPlus".
So, no more "equip-this-one-to-equip-that-one" thing...
Now, I need to write another conditional notetag, which applies some kind of a "punishment", after the said weapon is equipped. 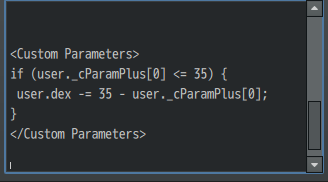 And this is where YEP_EquipCore comes into scene: it allows me - through Lunatic Mode - to customize this weapon effect, by checking the above condition.
So it would theoretically apply an effect of subtracting, say, 10 to 0 from 'dex'.

Again, it reads all of the above, checks and etc (I checked the console by adding the 'console.log()' thing).
But it does not write to 'user.dex'.

I'm pretty sure I'm doing something wrong here, just can't find out what...
I'd appreciate any help, hint, link, guidance.
Thanks in advance!

MORINGA said:
But it does not write to 'user.dex'.
Click to expand...

What is user.dex and where did you define it?
Most likely you defined it in a different context where the plugin can't access.

The engine itself doesn't have strength or dexterity or any values for it, so most probably you're using a plugin to create those values - which one?

Please give links to the websites of all plugins you're using in this context, people will have to check the exact code where is what in order to help.


Andar said:
What is user.dex and where did you define it?
Most likely you defined it in a different context where the plugin can't access.

The engine itself doesn't have strength or dexterity or any values for it, so most probably you're using a plugin to create those values - which one?

Please give links to the websites of all plugins you're using in this context, people will have to check the exact code where is what in order to help.
Click to expand...

Thanks for the reply!
'user.dex', as well as 'user.str' are custom parameters¹ I defined using QPP plugin (QuasiParamsPlus):
These can be altered via notetags or plugin code, once they become properties of the 'actor' object (or Game_Actors. prototype.actor? Or $gameActors.actor()? )

There's an implementation of Alistair's AP_StatDistribution, which I copied and altered to make it so that the player can manually change custom parameters on level up (just added entries, and yes, I know it's not recommended, but I see it as a temporary solution so that I can make any progress into developing this one, until I find something more...."by the book"/suitable).
Disabling it doesn't change anything, so I'm assuming it has nothing to do with the property not being set. 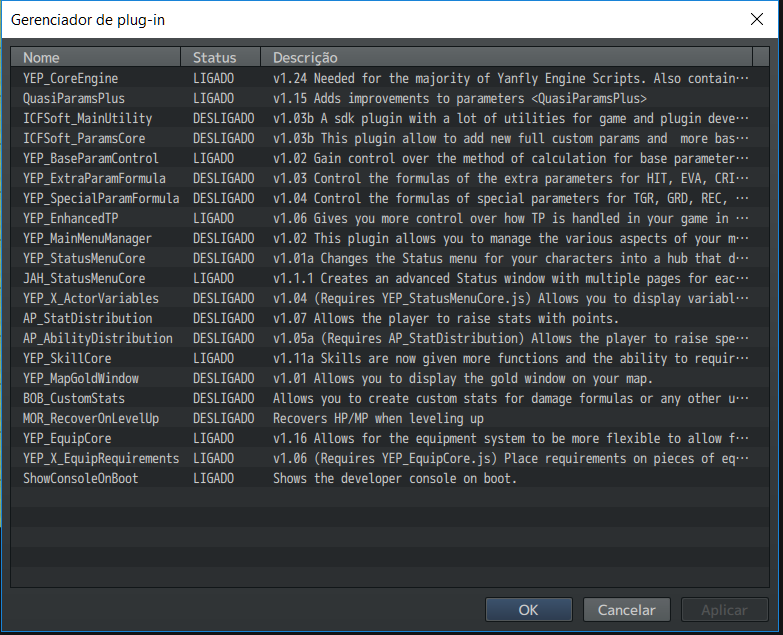 Thinking a little bit more (after finally sleeping, lol), I noticed that, with the exception of AP_StatDistribution and QuasiParamsPlus, all other plugins that deal with custom parameters only read from them.
I guess I'll have to check the codes that write values to them².

(btw: I'm having some difficulty getting the actor's ID and making it work in a notetag formula. I thought I'd never have to get the actor's ID in such situation because and item equipped by 'actor(x)' is supposedly related to that 'actor(x)')

@MORINGA
The 'dex' param is read only. Use user.addCParam(CParamId, value) and replace CParamId with the id of the dex param. To substract from the
param use a negative value.
Normally, there should be no problem with using it in the notetags.

waynee95 said:
@MORINGA
The 'dex' param is read only. Use user.addCParam(CParamId, value) and replace CParamId with the id of the dex param. To substract from the
param use a negative value.
Normally, there should be no problem with using it in the notetags.

You get the actorId by calling user.actorId() if user is an actor.
Click to expand...

Er...hum...it crashes (so I get nothing from console) when I use either addCParam() or setCParam().
Thing is: I'm not allowed to use it within YEP_EquipCore's notetags (I'm inclined to actually prefer it that way! Since it's a QPP implementation, there should be a "QPP-like" solution for this - if I'm not mistaken! But that would require another way to call those functions, since I may not use 'user', nor 'actor' for QPP...)


Fixed Params allows you to add a fixed param value to states and equipment.
With this you can create states that will add a constant value to a param.
Or create a poison / regeneration state that ticks a fixed number.
( You can also add these in Actors, Classes and Enemies Notes)

Value can be any number or even a formula. Can use a and v[] but not b!
I did miss a single letter - a statement, actually - that made all the difference: "can use a."
Which means the following is now working:


Code:
I'll remember this from now on: if plugin X implements feature Y, it's up to X's resources to deal with said features.
In the end, it was all about proper use of QPP and nothing to do with YEP_EquipCore.
Thanks!