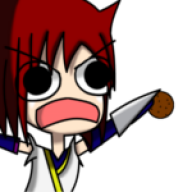 
You have to beat the False Hero first. Once she's down, then Origin becomes vulnerable.


(still very glad that you answered!  I thought I was going to have to wait a while)
Last edited by a moderator: Mar 15, 2016

Yeah, I'm pretty bad at posting here, aren't I? Well, I drop by every other day or so to see what's going on, so I'm definitely around.


Looking forward to hearing your thoughts!

Well, how should I begin this? I really like what you did with the story. The combat wasn't THAT hard even in the Childhood arc, since I came here after playing PotF's demo. (But yes, resource management was a bit hard in the childhood arc)

I don't know if it was intended, but the "mini-bosses" in the 2nd Stratum have 100% chance to drop a frozen flame(or whatever it was called), right? Well, they only took 2 frozen flame uses to kill, and they dropped a frozen flame which has 3 uses. So yea, since most of the times it was using Miasma Charge on its one and only turn, I started farming Large Miasma Samples until I got them to be worth around.... 2k marks? Also it was a chance to farm Frozen Flames too, so yea..... (Survival may actually be easier than Casual **cough cough**)

By doing that, I was kinda torturing myself because I was buying more items of all kinds for combat, and I hate having my inventory full of things.


Anyway, after fighting Origin.DESPAIR, I kinda avoided encounters. Like, almost no encounters at all. The rest of the boss fights were also way too easy compared to the rest of the game... (Thank that Cape for getting Zero's magic def to almost 60 iirc). So it felt like the existence of encounters was unnecessary after the 3rd Stratum.
The characters were nicely made. Each one had their own personality. I feel bad for Cieran, I don't think it was his fault. Nobody(?) knew what would happen.

Overall, it's a great game, just like Remnants of Isolation. Looking forward to the full release of Prayer of the Faithless!

Aslanemperor
I'm actively looking for people who want to recreate classical compositions in the public domain for RPG Maker games. I've got a whole kick going on of looking for several resources from anyone which would be sharable amongst commercial games. This latest pursuit is something I'm surprised no one else has started doing.
17 minutes ago •••

ShiningPhoibe
I played Deltarune chapter 2 today! It was great. No spoilers, but I hope one day I can design a world as interesting as Toby Fox and team.
44 minutes ago •••