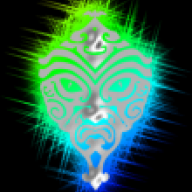 Synopsis:
Strato Mech is the first official release of a one-woman startup indie studio called Loa Entertainment.  Developed using vxace, it has quickly evolved over the mere two weeks since its original conception.  A fast-paced and challenging futuristic Mech shooter game, it utilizes a complex battle system wherein the arrow keys are used to control the first-person crosshairs in order to target various kinds of enemy Mechs in deep-space battles.  The spacebar and enter keys both fire the player's various weapons, which can be purchased and equipped via planetary Shops.  Powerups, consumable items and Abilities ("Skills") augment the player's capabilities, as do the 64 different Mech Modifications included in the demo which increase the stats of the player's Mech to varying degrees.  Some of the Modifications also grant certain Abilities, both active and passive, to even the proverbial playing field.

Interstellar exploration is also a key factor in the game, and a galactic Starmap is used to view known star systems to which the player can travel.  Five star systems can be seen upon starting the game, but only two are unlocked in the demo version.  In the full version, new star systems are discovered to total more than 20... And other hidden locations which can only be accessed via coordinates discovered throughout the game and entered into the player's HUD keypad.

Upon entering orbit around an inhabited world, the player can then interact with its government, visit its Shops for Modifications and consumable items, spend time working on their Mechs in the Hangars, or browse and buy new Mechs in the local Mech Dealerships.  Seven different playable Mechs are available for sale in the demo;  One is the Silver Reaper, the default starting Mech with the bare minimum stats and equipped Modifications.  The other six Mechs can be found on the worlds of Persues IV and Surentia, each one with different stats designed for different combat strategies.  Upon completing the demo, credits will roll and then the player is deposited back into the galactic Starmap.  At this time a new set of coordinates is given, which lead to a Survival Mode level at a Mech Pirate base wherein unending waves of enemy Mechs will assault the player until they either escape, or are defeated.

Each planet can be revisited over and over, even after finishing the demo missions, and level progress in a particular planet resets upon leaving orbit for the Starmap, making the battle levels replayable ad infinitum.


The Story So Far:


In the Galactic Year 18492, deep-space warfare was changed forever by the invention of Strato Mechs.  Small, light-weight, agile, possessing tremendous firepower and capable of interstellar travel, these one-man vessels quickly became a favourite of both soldiers and mercenaries alike.  Many of the wealthier worlds have harnessed Mech power to conquer and colonize half the galaxy, forging vast empires for themselves which perpetually fight each other for dominance over the vastness of space.

Less powerful planets, trapped in the crossfire of the endless wars and shackled by the rule of neighbouring empires, have resorted to Mech technology as a means of piracy and rebellion.  These outlaw worlds cite oppression as justification for their actions, further aggravating the already-volatile political climate of the galaxy.


It is now nearly one hundred years later, in the Galactic Year 18587.  Strato Mech capabilities have only grown since their conception, and the heavens are filled with pilots waging war in these deadly machines.  As an expert Mech pilot and retired soldier of the Surentian army, you have been hired by the Surentia World Council as a privateer to hunt down and destroy any Mech pirates, raiders and rebels who would use Strato Mech technology for unlawful purposes.
It seemed like such a simple job, at first.  And then everything changed......

- Main Character, initially named, simply, "Pilot".  The player has the opportunity to name themselves at the game's start.  The main character is a Surentian Mech pilot.  A former soldier of the Surentian army, you are now under the employ of the Surentian government as a privateer.  Initially your job is to hunt down and destroy outlaw Mech pirates who are raiding the law-abiding worlds of your local galactic region.  However, the job becomes more complicated as the story progresses and things are revealed to be not quite as black-and-white as they first seemed.

- Surentians.  Surentians are an aquatic people who inhabit the world of Surentia.  Large, strong and stoic by nature, they value honour and prowess in combat as an ideal to which one should aspire.  They are traditionalists, and are less technologically advanced than many other races, and as such are often considered to be a primitive, even savage people, by their more progressive counterparts.  Few would dare to say such directly to a Surentian, however, and Surentian mercenaries are in high demand the galaxy over.  They descend from the amphibious Perseans, who inhabit the nearby world of Perseus IV, and indeed all Surentians were once considered to be Perseans.  Several thousand years ago, as the people of the planet Perseus IV began to embrace high technology, many of the Perseans felt the need to resist the new era of technological advances.  Believing their old ways to be superior, these rebels argued that the new dawn of high technology would only serve to weaken their people.  But their protests went unheard, and their resistance became an all-out civil war which lasted for several decades.  In the end, technology won, and the rebels were exiled from Perseus IV to the planet of Surentia.  After many thousands of years, the Surentians adapted to life on their new planet, taking to the vast oceans, lakes and waterways to create an aquatic society that had honed the art of warfare to near-perfection.  It has been said that time heals all wounds, however, and the ancient conflict between Surentia and Perseus IV was no different.  After the flames of war had died down and the ashes gone cold, the two worlds struck a treaty that would forge a peace between them.  Over the centuries this peace had blossomed into a friendship, and now the two races call eachother by the nickname "Cousin".  They consider each other sister worlds, and their alliance is as strong as astarium alloy.  Woe to the fool who comes to either world with malintent; they will be met with fury, both in brains, and in brawn.

- Perseans.  Perseans are the native inhabitants of the planet Perseus IV, a cold and marshy world filled with sprawling wetlands and wandering rivers that are punctuated by vast and arid tundra wastelands.  Amphibious by nature, Perseans are the genetic ancestors of Surentians, but have not adapted to the deep water and thus are not aquatic like their Surentian descendants.  They share the same tough, blue skin and rugged build as the Surentians but have not evolved the webbed digits, gills or cranial fins of their counterparts.  Considered to be more intelligent as a species than Surentians, Perseans command advanced technology and were the first of the two races to develop artificial intelligence and the first to embrace the revolutionary Mech technology.  They used their superior tech and intellect to defeat the ancestors of the Surentians during the ancient civil war on Perseus IV, which led to the Surentian exile.  However, both races have since forgiven each other and forged a friendship and alliance which has lasted countless generations.  This alliance has only strengthened with time, and the two planets now consider each other to be sister worlds, even calling each other by the affectionate nickname, "Cousin".

- Auraelians.  Hailing from a lush, tropical world of dense jungles and humid rainforests, the Auraelians are a reptilian race with vivid green scales streaked with an intricate pattern of thin dark green stripes.  Their striped pattern and large, fern-like sails which protrude from their backs help them blend seamlessly into the jungle foliage, thus rendering them nearly invisible when in hiding.  Their bodies are almost always slender in build, making them a naturally quick and agile species adept at hunting and stealth.  Crafty and manipulative by nature, Auraelians are widely distrusted as a race of liars and double-crossers, which is compounded by the impeccable politeness with which they conduct themselves.  It is often said that for each thing an Auraelian says, one must sift through a hundred layers of lies to get to the truth.  Thus, it is rare that any dealing with an Auraelian ends up benefiting anyone except the Auraelian.  The denizens of Auraelis have long been bitter rivals of the Perseans and the Surentians, who view them as weak and without honour.  Auraelian technology is predominantly of a biological nature, and their living tech is well known to repair itself when damaged as an organism heals a wound.  One would be advised to take caution when approaching the planet of Auraelis.

Ouro
Wondering how big I can make Dorothy's skill menu before the game just becomes irredeemably bad.
50 minutes ago •••

InochiPM
I'm in desperate need of environment sprites and tilesets for my game. If anyone is interested please DM me im willing to pay.
Today at 8:00 AM •••

Touchfuzzy
All badges and prizes for the Let's Make a Scene Heart Edition event SHOULD be out. If you participated and haven't received either or both, send me a PM.
Today at 7:32 AM •••