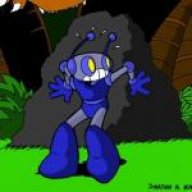 Hey All. I was hunting through the Forums and haven't seen this mentioned anywhere, but I noticed when playing around with the SV system that if you have a Dual wielding Class the attack animation only seems to play once. Both the "swing" animation on the SV Actor, and the Effect Animation that completes on the Battler. The attack numbers seem to be calculating the total attack of both equipped weapons, so I'm not sure if this is an issue, or just my aesthetic sensibilities being triggered. Any thoughts?

Upon reviewing the animation after I got some sleep, it looks like when a Character dual wields it seems to double up on the connect Animation. For example: If your actor is dual wielding a slashing weapon with the Animation "Slash Physical" assigned, it will play two slash physicals at once in opposite directions on the Battler. So a single dual wield slash creates kind of a V effect. Since this seems to be intentional, feel free to close this query. It's an odd choice, but I'm cool with it. I just wanted to make sure I wasn't missing something.
Last edited by a moderator: Oct 25, 2015