I'm playing with some tilesets, and I notice a tendency in fancier sets to go for tall doors. That does allow for more proportionate looking and lovely doors. But I think the default characters look weirdly short walking around in this lovely, tall town. Yet I see plenty of demo videos for the tilesets which show exactly that. I'm considering backing out of using a DLC tileset I acquired, mainly because I find the tall doors and the resulting tall buildings a little weird. But maybe i'm overthinking it, or even making a mistake.

Do what you think pleases you and what you think would please the player. There's a game for all options to strive, and it's all preference at this point.

I see a lot of people are picking tall doors, tall sprites. What are you using for your sprites? Custom characters? Hacks of the Dark Fantasy CP?

I would notice short doors/tall sprites, though. ;p

( What I personally use is tall doors/tall sprites because I make tall sprites. )

I have custom sprites but they're in the same light of the "short doors, chibi characters" that RPG Maker had defaulted to.

I do not speak for the part of the community that opted "tall doors, tall characters", but if I have to guess: It's likely due to their aversion from chibi characters in general. For some, you make more detailed sprites with tall characters. Some, they just don't like the idea of chibi characters (even though that's usually a result of the top-down perspective, but this is not that discussion).

I'll say it again- it's all personal choice. Do what looks good for you. You shouldn't think about alienating players because of your sprite sets, because there's no 1 answer to that.

Tall sprites and tall doors all the way. Even when I use default characters, I do upscale my characters and my doors. It is not perfect, but much better than characters as large as a bucket. ;p 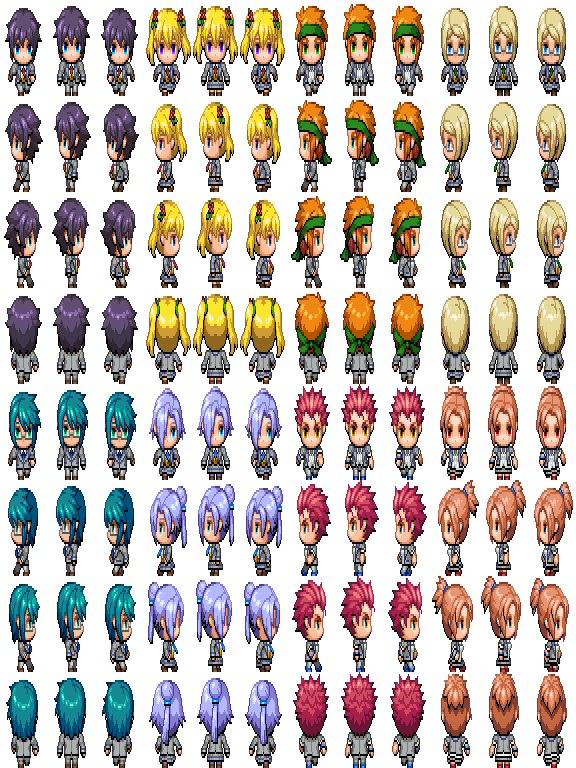 Right now, I'm using FSM tilesets, but part of me wants to scale down the doors, or use the RTP doors. But then again, some of the FSM wall tiles don't look great when they are only 1 high.

The flipside is that switching to large sprites would mean franking and recoloring dozens of characters and sv_actors, and result in a kind of Chrono Trigger remake look I was not looking for. I think I may end up reverting to the RTP tiles.
Last edited: Jan 21, 2022

Have you considered something akin to the taller Dark Fantasy sprites?

It is a matter of art direction. I am personally fine with both. Although I tend to choose short door chibi sprites because it is easier to map. I'm quite technical, one tile door (or maybe 1.5 tile) is enough to tell it is a door. No need to get fancier than that. But people with a creative mind might think that is quite limiting.

So long as the doors are proportional to the character sprite size, I'm fine even if they're 4 Tiles tall.
That being said, I prefer 'tall' sprites over the chibi ones.

Frostorm said:
Have you considered something akin to the taller Dark Fantasy sprites?

Yes. One course of action I was considering was going with the DF sprites, and since they have the same heads as the default RTP, using the generator to frank and recolor my characters. However, that would have entailed a lot of work, and I would then have to deal with other things, like bigger horses, getting weapon animation edits, etc. Keeping in mind that my project uses a lot of SV animated battlers.
You must log in or register to reply here.
Share:
Facebook Twitter Reddit Pinterest Tumblr WhatsApp Email Share Link

STARFALL
What happens with this list, is it currently possible to buy any of these RPGMAKER at least those that are for PC?
Today at 3:29 PM •••

zerobeat032
grief... finding a font that works with the engine has been a bigger process than I thought it'd be. doesn't help MV loves to scrunch letters next to each other like a football huddle.
Today at 6:55 AM •••