I love the lizard that's praising the sun.

Your colouring style creates amazing texture! Wow!
That little lizard trying to be a butterfly is the cutest thing.

The first one's really scary. It looks like it's trying to give birth to something worst than itself!!

Thanks once again. Love your creativity! 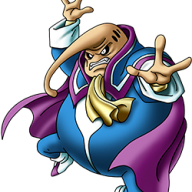 It'd be awesome if you did your Ars Goetia demons in MV style!

Koulucky said:
It'd be awesome if you did your Ars Goetia demons in MV style!
Click to expand...

Hey there Thalzon! I think I was one of the early comments when you first started doing battlers, so I saw this just now and took a quick look.... Oh my good lord Sheo, your work has gotten incredible! I mean, your early stuff when I was around was absolutely amazing work, but you've REALLY made some awesome artworks here. Im downloading some of the packs now, I just want to look through it all now and get caught up, lol. Can't wait to see where you go from here bud, keep up the awesome work!

Thanks for the comments, everyone. I am planning something for the Ars Goetia pack but it might be a ways off.

I can honestly say this time we're nearly done with VX Remix. Next week will be the last batch of old battlers, then we move onto new stuff. Enjoy.

And here we have the last of VX Remix. I think I salvaged pretty much everything I could. It was a fun trip down memory lane and a reminder of how much more effort I put into it these days.

I love your creature designs so much! 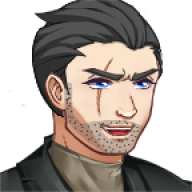 These are so great! Look forward to every time you update!

I envy your patience to detail in those tree leaves. Can't wait to see your new stuff.

Those trees turned out awesome, cant imagine the time to shade that foliage...

Gorgeous stuff. A delight for the eyes and The imagination...

Thursday update. Before we move onto a new set (which I'm still left deciding some things on at the last minute...) I've got more Dungeons & Dragons heroes based off campaigns I participate in.

Heather is a human ranger in her early 30s. She's out searching for her half-orc brother for reasons she won't really share. Her half-brother is the bald half-orc Reinhold (check earlier battlers for him) and she missed him by a hair's breadth in the campaign itself. She's all business, stony-faced, and doesn't have much of a sense of humour.

Orian, a paladin from a different campaign. Has a Dark And Troubled Past, is fresh to adventuring, and started a bit cocky but got a lot more cautious after a few brainings from bugbears. He's being groomed by the Harpers into a world-saving hero. Their methods of such grooming are suspect. He is actually an Aasimar, or angel-human hybrid, but even he doesn't know this yet.

Kazra is a human rogue. Middle-aged, stout and plump, and something of a coward with a heavy sarcasm streak. He's wanted all his life to make easy money and live the good life, but being an orphan with nothing to his name gave him a bad start. He lost his left hand in his youth for thievery, and never stays in one place for long. He was brought on the team by his childhood orphanage-mate Larissa to mentor Orian. Again, the Harpers are apparently not the most attentive groomers.

Gunvaler Neirdre, a sun elf mystic, ie the most pompous of elves. Has an ego a mile high, and wraps it up in false benevolence. Whether he believes being better is a genuine responsibility to help the less fortunate or not is up to debate, but at least he walks the walk. Also a bundle of neuroses, has a fear of water so severe he does not even bathe (Prestidigitation helps with that). Probably the least evil teammate overall.

Roc'tuc, an aarakocra barbarian and sky pirate. His crew mutinied and stole away his precious airship, and he's looking to take it back. Curious and a curiosity himself, he's always trying new things. He doesn't have strong opinions on the quest because the power plays at work are so foreign to him. Also, he's only ten years old. Although the rest of the group treats him like a bird brain, he's far from a fool.

Now, for heroes from my campaign.

Jackie, a human rogue and private investigator. Hired to find a missing person, he winds up wrapped into a race to unearth the sunken city of Atlantis. A rather dry person, he attracts misfortune like flowers attract bees. Whether he embraces the misfortune and makes it his life or simply does his job remains to be seen.

Karen, a merfolk wizard. A traveler from a family of warriors, Karen is something of a technical pacifist. She knows no spells which directly harm their targets. Not to say she isn't a somewhat petty, miserly person. She is shrewd and cunning, and all too eager to enact revenge plots. She hates spending money unnecessarily.

Mistral, a genasi bard. Along with Jackie and Karen, they're the more cynical half of the party, make plans, and prepare for the worst. Mistral is a manipulator of hearts and minds whose goal is to get as rich as possible. Despite her appearance and her race's reputation, she is quick to violence, doesn't like to gamble, and is by no means flirtatious. She has many self-proclaimed suitors, first among which is a fellow genasi of flame named Tethis. But she'd sooner cut off his fingers than put a ring on one.

Stan (short for Stannius), a wood elf druid. Bright-eyed, bushy-tailed, completely and utterly a fool and rube. Believes most anything anyone tells him, always tries to help, and gets himself and the party into some serious messes as a result. He's also harbouring a powerful curse that plays havoc with his wild shape powers. Still, he's earnest and will not stand idly by if he sees injustice being done. Despite his youthful appearance, he is easily the oldest among the party.

Blake, a cor monk (Cor are a Magic the Gathering race). Unusual in the tropical island region the story takes place, Blake is a sculptor, smith, and artist. He's on a quest to find beautiful works of art to inspire his own work. He was abandoned at a young age and raised by a rather quirky merfolk elder living in the mountains. Blake is unerringly polite, but his decision-making skills leave something to be desired. He tends to be stubborn and not fully grasp the consequences of his actions.

Tanjin, a gnome artificer, on his first journey abroad. A prodigy in the field of robotics with an excitable, curious personality. He's built a large warrior-like machine he's named Mike, and was on his way to the Mirosa Empire to further develop robotics before the merchant ship he was on exploded. Now he travels with the party, and his robot suffers a lot of damage which makes him sad. Younger than he looks, possibly because of one too many sleepless nights.

I like the gnome the best. He could work as the engineer who built your robot monsters.

Today we get started on the Grasslands set. Grasslands covers a rather wide swath of environments: farm lands, savannah, meadows, and so has an equally-unusual mix of animals and monsters.

That rhinoceros has been done for, like, ten months (see the woolly rhino in the snow set) but didn't fit any of the later sets thematically, so it's just been lying around waiting for an appropriate appearance. Enjoy.

Thursday update this week mixes in some mythological creatures.

The big purple guy is Emela-Ntouka, a monster from African lore. It was allegedly more like a rhino but larger.

The dark green humanoid is a boggart.

Was looking forward to this all day, great work.

zerobeat032
it took soooo long to get character assist to work right in my game. like certain fighting games, a team mate can hop in, do an attack, then leave. it works since these are all one on one fights (usually)
Today at 9:03 AM •••

Snowlily
Hi! I've been working on some character sprites for my pirate themed game.
Still somewhat new to pixel art, so feedback or inputs would be appreciated ^^ 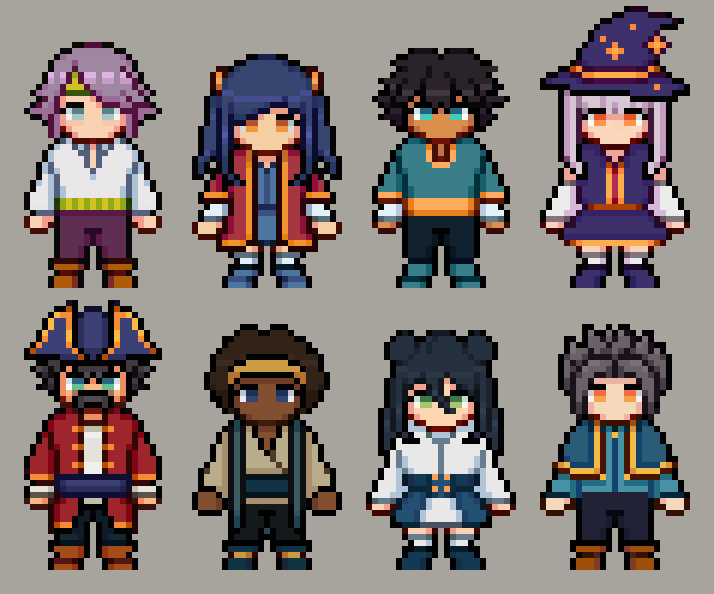 LunarFlareStudios
TRIVIA: I love Japanese food and culture! I've never been to Japan, but someday I'm going to go to Tokyo and do some touring, including Disneyland Tokyo and DisneySea! And I even prepared myself for earthquake safety.
Today at 4:37 AM •••

PixeLockeT
The virus really doesn't want us to do this GameJam. v .v' Even if we don't meet the deadline because of it, still plan on making it a game we'll release.
Today at 4:27 AM •••