The Lost Art of Innkeeping

You're welcome! I was trying to think of shows/novels that take place in that era. (The lawyer idea comes from Dracula )
I forgot to mention two guests in my previous post: gnomes and trolls. Since you have some fantasy creatures in there already I figured these might fit in too.

As for Sherlock, I agree that the pattern, a sidekick and a clever name will probably be obvious enough

Here's a draft of the newest guest in The Lost Art of Innkeeping! Her name's Shirley.

@Finnuval and @slimmmeiske2, does this remind you of anyone? I don't think my pixel art skills extend to drawing the herringbone or checkered pattern of tweed on such a small scale - I tried a checkered pattern but it didn't look very good. But I'm hoping the hat (which is modified from the cap in MV's generator) and the coat (which I just learned yesterday during my Google image search is an Inverness cape) and the colors work.

@fizzly recently playtested the game, and gave me very useful feedback and suggestions, including the brilliant idea of having a party once the player achieves the main goal of becoming the owner of the manor. Thanks, @fizzly!

And here's the surprise party to celebrate the player's achievements, complete with gifts that will add little finishing touches to the manor! 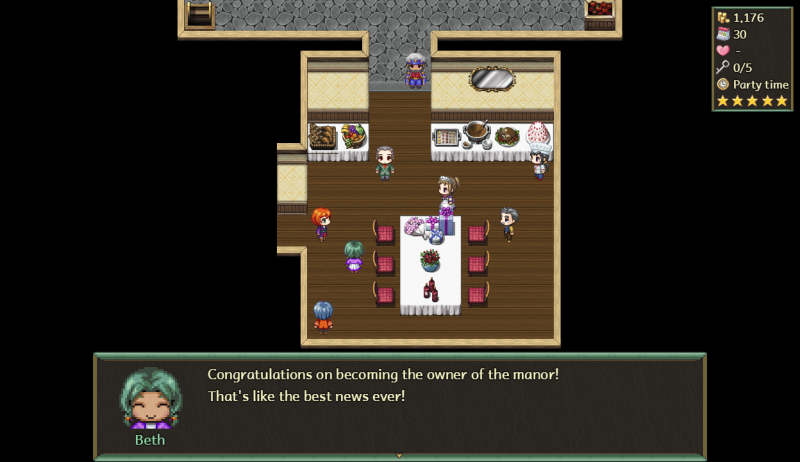 Now that the second round of playtesting is over and there seem to be no major bugs, I hope to release the game within the next few weeks!

@SeaPhoenix, thank you so much for implementing the idea with the party, I love it! Another reason to play again after release! It was a pleasure to playtest it. Can't wait for the release.

Can't wait to see this released. I'm actually looking forward to it xD
Good luck on the last few inches to completion

Now that the game is very close to release, I've launched the website (http://seaphoenix.itch.io/LostArt) and uploaded a YouTube trailer (which you can also find on the first post).


I hope the trailer showcases the game well enough! I actually thought making it was one of the most difficult things about this whole process, especially since this was my first time. I had to try out different screen recording software, record videos multiple times to get a high-res result (and also choose which scenes to record... and then realize that no, that scene gives too much away or doesn't show enough stuff), and try out different fonts and colors so they would show up when superimposed on videos.

There were so many other things too that I wanted to highlight about the game in the trailer (You can try to catch a ghost! You can decide whether to be an altruist or a loan shark! And should you return items lost by guests or sell them and rake in the money?) but couldn't since I was trying to keep it short.

Anyway, after spending almost an entire week on this, I can finally go back to finishing the game up!

However, in all honesty it doesnt get me pumped for the game all that much (which i think a trailer should try to achieve) however I am already looking forward to it so no problem there..

That said, all in all it is a good try and doesnt bring the game down in any way (which can also happen with bad trailers lol) so good job!

Thanks for the feedback, @Finnuval! I personally like the stuff the characters say (little jokes or mini-quests) but I couldn't find a good way to show short conversations in a 2-minute trailer. And of course, I held back on most of the clues you find and the main storyline, because I felt like that would be giving things away.

Anyway, suggestions for improvement are welcome! I might also do a short series of videos/screenshots introducing some of the characters when the game is released, but for now, it's time to find and fix the last few things!

I don't know if anyone else is like this when finalizing a game for release, but every time I say to myself, "This is my last playthrough to make sure everything is fine..." I end up making some changes (mostly tiny ones like fixing typos or the timing of a cut-scene, but sometimes I think of bigger ones to implement too, like a new mini-quest!). But of course, then I have to do another playthrough!

I've come to realize that I should just commit to a release date because otherwise I'll keep thinking of stuff to add and the game will never be done!

So I'll be releasing the game on Friday, May 8 on https://seaphoenix.itch.io/LostArt! 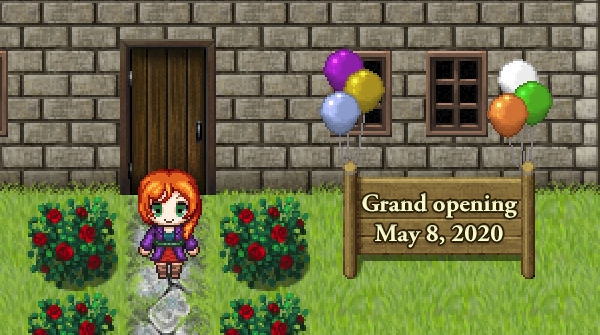 (Needless to say, I won't be finished with everything at that point, because I'd like to release the game on Steam within the next couple months as well...)

I can't wait! (But I prefer to keep my games together on Steam, so I guess I'll have to )

Btw I watched the trailer and my thoughts are pretty much the same as Finnuval. It doesn't really excite me (but I was already pretty excited xD). I wasn't really sure myself why this is, so I went and watched the Stardew Valley trailer and the difference between the two is that SV shows more different enviroments. (Obviously the game is bigger and has seasons, so that makes it a lot easier for them, than for you). What I mean with that is you see the same menu/surroundings a lot in your trailer, so I think either showing some small storybits or just making it a bit shorter would have been better. On the plus side, it shows the gameplay features really well. Anyway, I do think it's pretty good for a first trailer and I'm personally of the believe trailers aren't that important to convince players to pick up the game.
(On a side note, what's the font you used in the trailer? It's very fancy, but also very readable)
Last edited: May 5, 2020

Thanks for the feedback, @slimmmeiske2! Both you and @Finnuval have given me lots of good suggestions, so I'll try to incorporate them when I make another trailer (possibly for the Steam release).

The font is Tangerine: https://fonts.google.com/specimen/Tangerine!

Thanks, @Finnuval! I've added both you and @slimmmeiske2 to the credits as you guys have provided many useful suggestions - I'm very grateful to both of you and many others in the community here in general for sharing your work and ideas, encouraging and helping others, and providing feedback! This forum rocks!

And here's one last screenshot before release day - one of the new areas you can unlock is Coral Cave, an old mining cave which has fallen into disuse, and so once again the corals thrive! Your guests will love to visit it and needless to say, there's some loot in this cave as well. 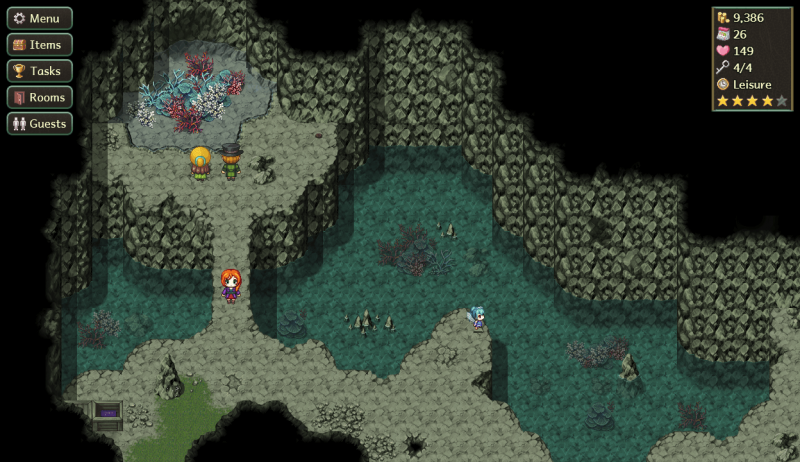 The Lost Art of Innkeeping has just been released on https://seaphoenix.itch.io/LostArt, and will be on sale for $4.49 till May 17!

Can you transform a dilapidated old manor into a 5-star inn that caters even to royalty? Immerse yourself in a fantastic historical setting, where the newly-invented telephone and Charles Dickens novels can coexist with fairies and actual cat burglars, and where people have penguins and turnips as pets. 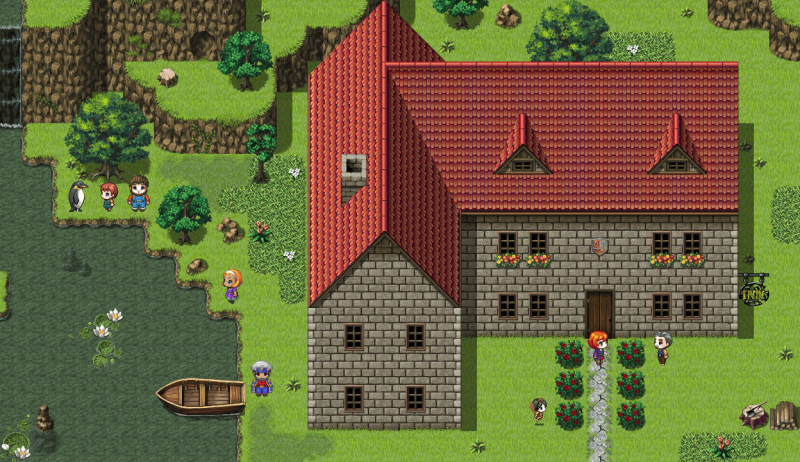 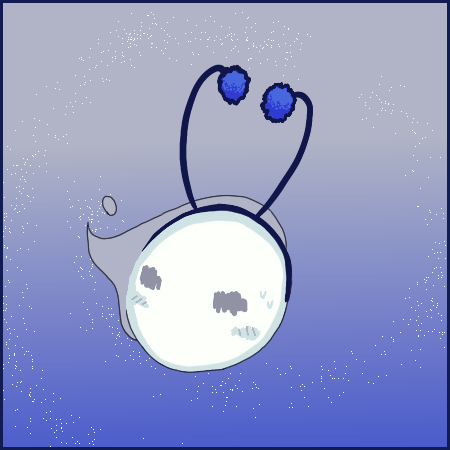 jkweath
Minecraft Dungeons is a great example of a game that's much simpler than other games in its genre but almost as equally immersive and fun to play. Lotta RPGmaker devs could learn from that lesson.
Today at 7:34 AM •••

Tonko
Well, it's been a while since the last time I came here... Is there a JS scripting FAQ? I'd like to know what it's capable of achieving, and how
Today at 6:48 AM •••

Hudell
I love the Time Fantasy tiles, but haven't played anything made with it yet. Can anyone recommend me something?
Today at 5:40 AM •••

Touchfuzzy
Vote for what I show more indepth on Twitter tomorrow from the MZ default resources
Today at 4:58 AM •••