RMMV Theory of Everything - An RPG that makes you think

It took longer than announced because I decided to transfer the whole game to RPG Maker MV, but here it is !

Warning : this game evokes religions in a philosophical perspective.

You start with Isaac, a young physicist who begins to build a theory of everything. During his quest, he will meet three other playable characters and many famous philosophers, physicists or mathematicians to help him. As you chronologically progress through history, a lot of new questions will arise and you will have to answer them in order to maintain a sturdy theory. These questions are mainly philosophical decisions : Is the world deterministic ? Does God exist ? Do we have free will ? These choices will influence the relations between the protagonists.

From ancient Greece to the most recent discoveries in physics, you will meet more than 70 famous thinkers and you will hopefully learn a lot of things. Each character will try to explain his personal contribution to science, in an easy language in order to attain even the laymen.

There's not much more to say about the story, since I did not invent anything !

Isaac is a physicist. He wants to create a theory of everything, which would be able to explain any phenomenon in the universe. But he's just an amateur and still has a lot of things to learn. He is determined and will stay focused on his goal in any situation. He represents the core of the theory.

Leonhard is a mathematician. His main purpose is to support Isaac in his physical representation of the world. Convinced that mathematics are the purest form of science, he feels superior to his companions. He suffers from limited social skills.

Sophie is the philosopher of your team. Her job is to understand what's not covered by experimental science. She's quite impulsive and won't easily admit when she's wrong.

Theodore is a theologian. When science and philosophy fail to explain something, there's still faith and religion. Theodore provides additional support on the most difficult questions.

Concretely, it's very basic stuff. You spend energy to use skills and damage your enemies. But the interpretation of "fights" in the game makes the whole thing more interesting.

Fights are actually philosophical debates, where you try to convince your opponent. All skills are based on theories, theorems, philosophical principles or simply some facts. The statistics' names are therefore adapted : "Attack" becomes "rational power", representing the capacity of a character to rationally explain something. Rational defense determines the rigor of one character's reasoning. Speech rate indicates how fast you can expose a statement.

In this context, weapons would clearly be useless. So the "weapons" are actually books, famous books written by the people you meet. There are about 50 books in the game. The books increase or decrease statistics according to their subject and to the writing style : if the author tends to write very long and obscure sentences, your speech rate will decrease while using this particular book; and a mathematics book where everything is rigorously proved will certainly increase your defense.

Synergy between characters is also an important point. For instance the philosopher can increase Isaac's speed by using Occam's Razor and then Isaac will deal more damage with Newton's Laws, since this skill's power depends on his speed.

There are many puzzles scattered in the game. Almost every chest asks you to solve a problem and some of them may be really hard without prior knowledge in maths and physics. Since I obviously can't include whole maths or physics courses, there will be some hints, and playing the game with external help (friends, internet…) is actually recommended if you want to learn more things. For some simple quizzes, you might even find all the correct answers by talking to people.

The game is mainly designed to arise curiosity and force you to think about philosophical problems that many people usually ignore. The main quest should occupy an average player during at least 10 hours. Then there are endgame quests and mini-games to extend this duration.

Dialogues are mainly built from actual quotes of the people you meet. I tried to stay faithful to their opinions, but it’s not always easy to identify them.

Some characters talk about religion in a philosophical purpose. Many religions are evoked in the game and their respective books are equally strong to satisfy everyone.

A friend is currently proofreading the whole game. There are probably a few typos and weirdly-phrased dialogues since English is not my native language. 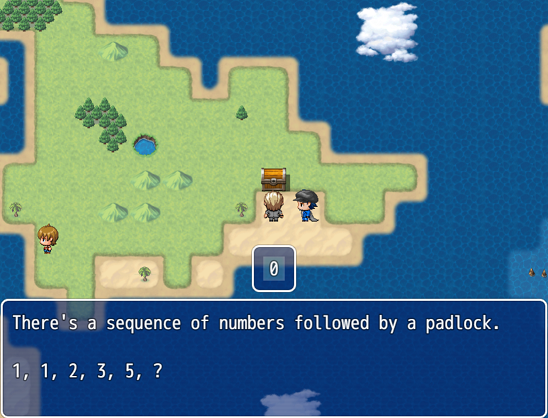 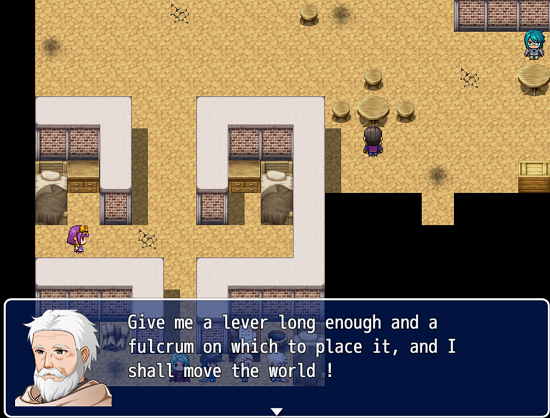 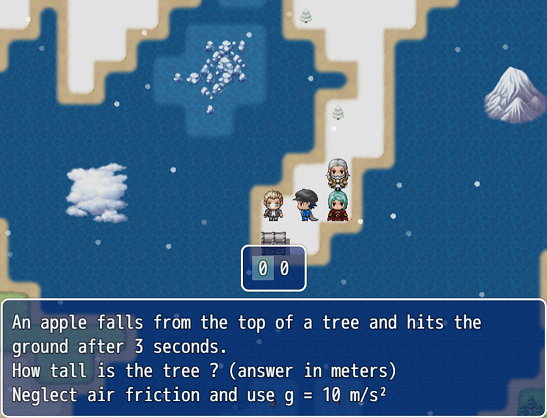 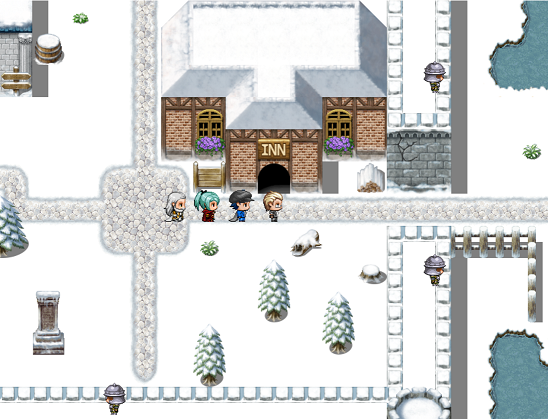 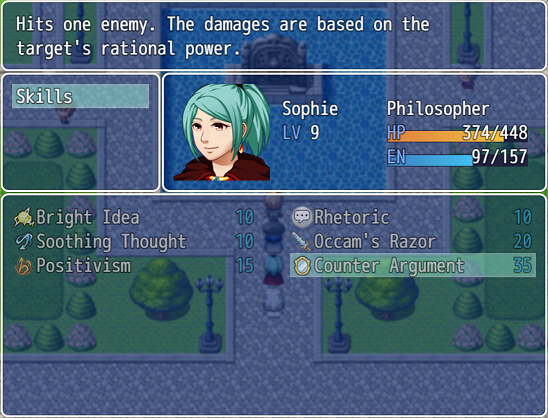 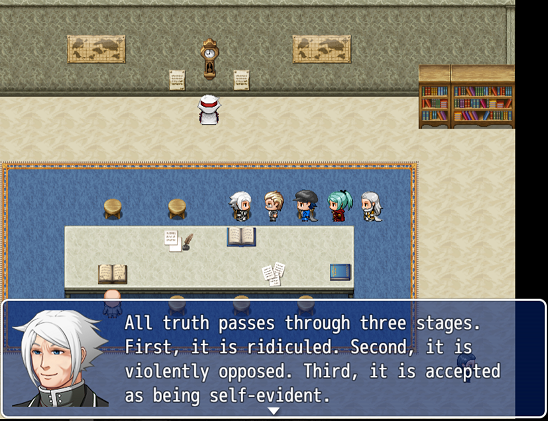 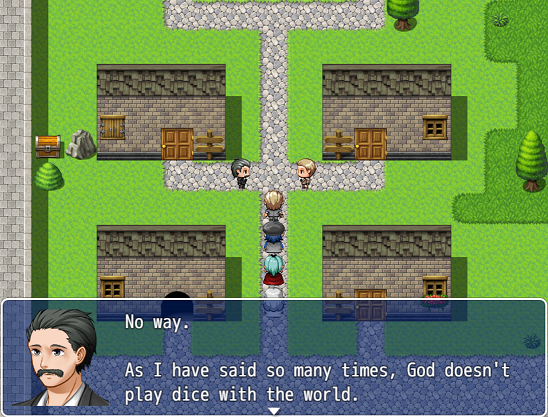 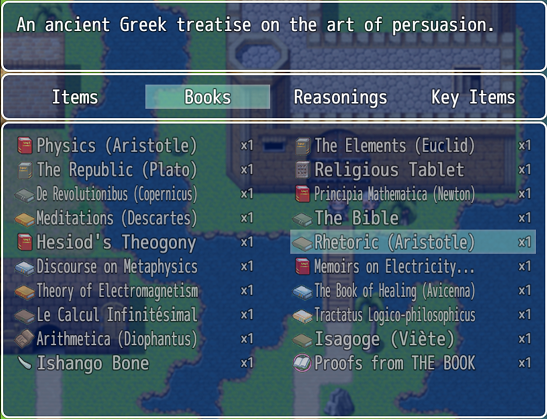 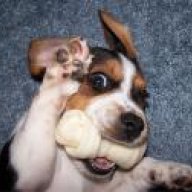 Imma be honest here. The 3rd screenshot turned me off completely xD! 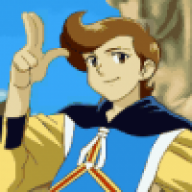 How FASCINATING! . . . indeed, as @Kyuukon correctly said, the 3rd screenshot is total turn-off . . . IF the game doesn't allow the player to just ignore these awful math and physics problems to carry on with the narrative. BUT if one can, then it's ok.

IN PRINCIPLE I love the concept!!! That last screenshot is genius (I got all excited to read those titles, most of which are in my library!). The names of those skills and DMG based on RATIONAL POWER ^_^ brilliant! The quote in screenshot 6, precious.

Judging by the pictures, virtually everything is default (tilesets, windowskin, fonts, everything) and no attention is paid in the very least to visuals or map desing in general (it's almost Nihilistic visually, one might say! LOL... As often happens in real life colleges, universities and faculties, Aesthetics is the least of concerns ). BUT you DO warn us that this is a "reading game", in which you want to confront the reader/player with basic philosophical concepts, authors and questions! If one keeps this in mind, it'll be ok.

Andronius said:
How FASCINATING! . . . indeed, as @Kyuukon correctly said, the 3rd screenshot is total turn-off, absolute bummer . . . IF the game doesn't allow the player to just ignore these awful math and physics problems to carry on with the narrative. BUT if one can, then it's ok.
Click to expand...

These kinds of chests are obviously optional ! The game will never force the player to actually learn things in order to progress. Even if some characters ask you a few questions, you can always guess with multiple choices.

Indeed, the dialogues are the most important feature and everything else is just there to make you feel like you are playing a game. I still tried to make it not too ugly ^^

@Andronius You're right! I totally missed the chest! That's a very clever mechanic actually. And like you say, the player is not forced to solve it but it really does motivate one to do it anyway I take back my previous comment. 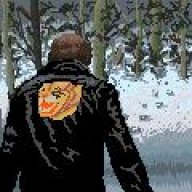 Edit: does the game really need to be over 1GB? Have you tried using a stripper tool to get the size down?

JRibbons said:
Edit: does the game really need to be over 1GB? Have you tried using a stripper tool to get the size down?
Click to expand...

Most background musics are very long (because I hate short loops), so they take a lot of place. I'll see what I can do ! 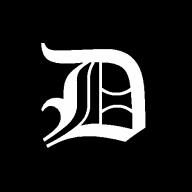 I started playing this and I find it really great, such a wonderful job! I can't wait to finish it. (Well, I am a mathematician so I guess I'm not at all upset about the math stuff!)
I'm so grateful for this, thank you. 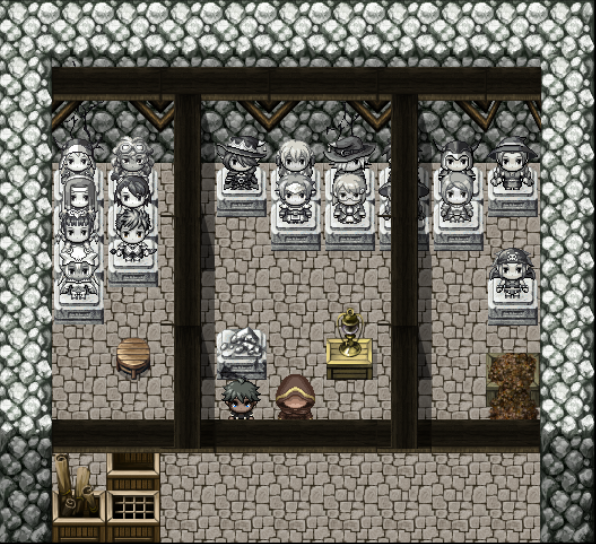 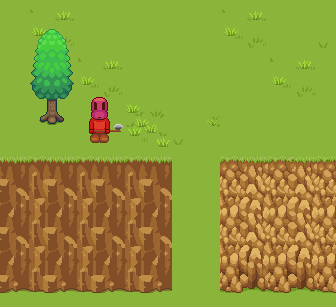 Trying to draw some pixel art cliffs. Which side looks better, left or right?
Yesterday at 10:05 PM •••