Tod is an ATB based RPG with a slightly different approach to strategy.
The story revolves around a chicken that an unknown entity called the Unholy Cat has made into a grim reaper.
You play as that chicken which the Cat has fittingly titled "Tod" and your objective is to find out what the Cats motives are and how to stop his evil schemes!

In this game, you have no breaks from fighting your way out of the Cats evil chains that trap you inside his realms.
To survive and make it through the game, you have to rely on your survival instincts and plan ahead accordingly.
There are no Towns, Inns or any resting places for you to find. You have to rely on yourself and your allies that you will find along the way.
There are many optional areas to visit and many things to discover... so be sure to snoop around every corner. Make the best of everything you can find.

Let's list some features:
-Engaging Combat mechanics
-A somewhat simple story
-Tons of optional things to find
-Overall liniar experience with a couple of diverse scenes!
-Short and to the point completion time(probably)
-TONS of extra modes for you to try out! ->(NOT YET IN THE GAME)<-
-The Story that you left off with will continue into the next game, depending on which password you have acquired.
And much more!

Just wonderin' how many of you have beaten it! xD

Or how far you guys have gone without dying. lol


TOD 1 has received a new Version and isn't as sucky anymore!


I will continue on TOD 2 and 3 as well. But this will take time!


For now, thanks for checking it out!


Gonna check this out.

So there is a Duckling Reaper and an evil Meow....amusing....


Downloading it now. Will give feedback as fast as I can.


But for now, could you maybe try my game - Dying World? It's a 5 part episodic series, PART 1 available at Completed Projects.


It's about a Post Apocalyptic USA, where you play as a Ranger named Harold as you get betrayed and left to die. But someone manages to save you in time, and now you want revenge...

I updated the downloadlink in Mediafire to contain the most up to date TOD... so people won't download the crappier Version anymore! xD


I'm still working on Version 2 of TOD 2, so you have to wait for that for a while.

I updated the downloadlink in Mediafire to contain the most up to date TOD 2!
+ new Screenshots for TOD 2.
But if you're too lazy to go back to the First Post, then just click this: http://www.mediafire.com/file/4s2dail4h5bw8nh/TOD+II.rar

I hope you enjoy!
Hard mode will come soon-ish!

PS: I have to update the first Post, because it's really old now... 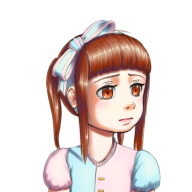 Well.... That was quite something... I was not expecting my heart to be ripped out in agony with a depressing ending, ha ha! Dang, That had a very clever plot twist in it! I almost wished it was a bit longer! I give it my stamp of approval.

MRHAPPYFACEMAN said:
Well.... That was quite something... I was not expecting my heart to be ripped out in agony with a depressing ending, ha ha! Dang, That had a very clever plot twist in it! I almost wished it was a bit longer! I give it my stamp of approval.
Click to expand...

Lol, well there's also TOD 3, but that ain't even done yet... well, technically it's done, but i want to make a version 2 for it.
Here it is: https://forums.rpgmakerweb.com/index.php?threads/tod-the-grim-reaper-3.64711/

So after long thinking... I came to the conclusion to make this Game Series a little bit more special than just being a 1 Week failure. I have been developing a new Version for TOD 1 (again)!

I want this to become a good Trilogy and now I'm trying to aim a little higher. I will re-invent the Wheel and try to be a little more serious about it this Time around. And as you can see, the change is (imo) quite drastic from the previous Version.

I have edited the first Post and added lot's of more polish, so check that out!
As for the Game and it's features:
- The Game shifted a change in tone, making it a bit more serious and dramatic, but humour isn't still left out.
- The Gameplay has been heavily changed, but not perfected and I am currently searching for a Scripter to fix some certain bugs (More on that later)
- The linearity will be less obvious and I will try to implement more Areas and a fair amount of optional Content for the Game.
- The Gameplay will still be prioritized more, but the Story now will be completely fleshed out and not look like a Child made an Edgy School Project.
- I have FINALLY hired a good Componist to make me original Tracks!
- Despite all of that, I will still release every Game for free, since I don't like the Idea of this Project being dictated by a Number. It will be made with Heart and Soul only and I won't allow anyone to change my Tone about it. And since I like taking things the casual way and not stress too much... it means it will take Time. I am aiming to make these first 2 Games be completed by the end of 2019. The third Game however, will take me another 3 Years, since my Vision for that is a GIGANTIC one.

I would like to thank everybody who tried my previous Versions out, despite them lacking almost everything. I will try to make all of them unique and familiar.

And of course, with such huge ambitions in mind, I won't be able to finish it alone. In fact, I could REALLY use a Scripter who can help me out anytime! And don't worry! Because I don't like to take this Project in a commercial way, doesn't mean I'm not gonna Pay. Just be a little gentle about the payment, since I can't afford alot. I'll appreciate every Help I get!

Anyway, I know you guys are hot for the download link, so here it is:
http://www.mediafire.com/file/55qjwiszw533dxs/TOD+1+Yet+another+Test+Build,+but+now+Public.zip

Note, that this ISN'T the final Version 3! I put this up, because I want Gameplay Testers for the Gameplay stuff and to let you see how much it changed.
PS: you can miss the first Party Member, so save at the first Save Point.

Thanks for your Time! I'll update you guys later!

So apparently I can't change the topic title, which baffles me, but ok.

Tod has received a recent Update and lots of new things came in. In fact, I can almost say that it's finished.

In this demo you can play through the entire game and only just a few things have been left out until the true final update.
Demo: http://www.mediafire.com/file/um2mxah92oe08du/Tod+-+Almost+finished+game+demo.7z

This demo features currently:
-Engaging combat mechanics
-A somewhat simple story
-Tons of optional things to find
-Overall liniar experience with a couple of diverse scenes!
-Short and to the point completion time (probably)
-The story that you left off with will continue into the next game, depending on which password you have acquired.
And much more!

The Final Update will contain all of the story elements, Hard Mode, additional other modes which there's gonna be plenty of, all passwords and the "After Ending" Ending. (It pretty much is what it says on the tin.)

I have also (as you can see) updated the starting post.

PS: I wanted to turn this topic for just the first game only, but like I mentioned, I can't change the title, so I guess you guys have to wait another 2 years for the second games 3rd huge Update lol. Until then, just play the old Version 2 of Tod 2, I guess...
You must log in or register to reply here.
Share:
Facebook Twitter Reddit Pinterest Tumblr WhatsApp Email Share Link