TJP623 said:
Same! It must be hidden well; for some reason I feel like something is hidden in the Dutch Bounty (like behind the rocks in the boss room or something)
Click to expand...

I though also more at the bank "time to buy a new pocket watch"
but whereever I look, it's very wel hidden, it's nothing that is called
"easter egg" that should be to easy to find.

Trailblazer Is Upgrading to OTB!​

Trailblazer uses a Standard Turn Battle (STB ) system, allowing each battler to act once per turn, but also getting to act as soon as you choose an action. After much deliberation, Trailblazer will be moving to an Order Turn Battle (OTB ) system. I'm sure you've seen plenty of OTB game here, but the new interface looks like this for Trailblazer:

But that's not all. There's been plenty of other updates to take advantage of the action economy and turn order manipulation that comes with OTB, as well as a few other upgrades like Status Glow Effects: 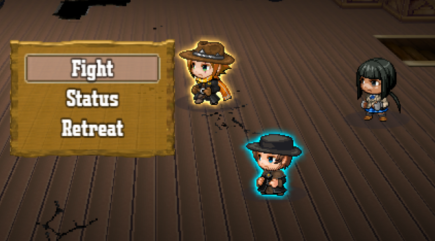 All of these updates are currently available in the Beta version. Check out my devlog on itch for more info! You Spoke and I Listened - Trailblazer by mf_WillBlack

You Spoke and I Listened Thank you everyone who's played the new demo or been part of the beta! The feedback you've all given me is invaluable, and I'm so happy to see so many people having so much fu...

that looks really nice though =)

alice_gristle
Hi sweethearts! Check out my review of @EntangledPear's totally oldskool The Stuff Fairy Tales Are Made Of!
Yesterday at 9:15 PM •••

ZombieKidzRule
When you spend all day at work distracted by things you want to work on or try in your project and then by the time you get home, you are too mentally tired to concentrate so you just browse the forum instead and think of more things you won’t get to work on for a while.
Yesterday at 6:46 PM •••

Poryg
Call of duty 1&2 had an interesting cheat prevention method. Between levels the game unloads and reloads the engine dll. If you ever employ this method, make sure to include at least an md5 hash check. Otherwise I can just edit that dll and implant cheats into it.
Yesterday at 2:19 PM •••

zerobeat032
Hi-Fi Rush is one of the coolest games I've seen in a while. I don't have a way to play it so I watched a friend and wow... I really wish I had a powerful enough computer for it.
Yesterday at 2:12 PM •••