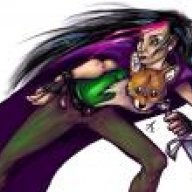 Downside is I'm new with scripts and can't quite get either to work. The character effects, for the moment I am just trying to get a simple shadow, just isn't showing up and the region effects script gives me a game crashes and errors any time I enter an effected region area, similar to this - Script ‘Game_Event’ line 24: NoMethodError occurred.undefined method ‘id’ for nil:NilClass.

I've read through the scripts' FAQ, followed the instructions and had a comb through and play with the settings but still the first isn't showing and the second is all errors. I've had problems with Galv's scripts in the past but most of the time it has been an easy fix that I don't recognise because of my unfamiliarity with scripts at this present time.

I an supply screengrabs if necessary.

Did you try to download them and test them out?

Also, if you are still having problems, you may have to consider letting us that other scripts you are using as well in the same project.

I took the script straight from the demo's actually, changing appropriate settings for my project but for the most part leaving it untouched.

I haven't actually tested it on it's on, without any other scripts. I will try that and get back to you.

EDIT: Ok I have somehow got the region effects working, I think I was copying over the wrong map. I'm unfortunately still at a loss with the Character effects. I pasted in the script and nothing is happening, there is clearly some settings to rework but...yes still very confused.

LunarFlareStudios
I had lots of fun! Kids loved me, and some took pictures. Unfortunately, the videos didn't send... but you'll see Chica in action when I do a trailer for Fandom Scouts!
9 minutes ago •••