Meowsticks said:
I actually made the beach front when I was on vacation at my state's beach town. It felt like the right thing to do. I do have plans for it later, but for now it's just a neat little area. I plan to eventually create a lot more tiny side areas just there to explore (like the random trees in one sea).
Click to expand...

My whole world right now is somewhat small islands in the ocean so I immediately noticed your beach front area. I liked the surf effect and tried to catch a wave to no avail.

Meowsticks said:
If you would like, I have a list of all the Friend Conversation spots. I just didn't post because I like letting people explore and find things on their own without just being told where it is. But I also understand that feeling of missing literally one thing and not wanting to scour the entire world for it.
Click to expand...

Thanks for the offer. Yes, I'd love to see the list since I found out there's am extra scene for completionists. Some of those conversation spots are found at times when the "correct" people are not present.

Meowsticks said:
By the way, I finally went ahead and made an actual visual intro cutscene to go with the narration instead of just a blank screen. It's not updated yet, but whenever I get around to it I'll get a small update with the intro and a few mapping changes as well.
Click to expand...

Great, but I would rather you spend your time adding places to your current world .... if I have a choice.

@kimo
Here's a list of all the locations of Friend Conversations (except for the seven required ones)
Get used to finding one and being told you can't do it yet. I based them off of "Heart-to-Hearts" from Xenoblade Chronicles you'll be finding a bunch of these across the world that you won't be able to do until either the story bit happens, or you've done earlier ones between characters.


kimo said:
Great, but I would rather you spend your time adding places to your current world .... if I have a choice.
Click to expand...

I'm working on progressing forward as well. I find it hard to do one task for a period of time so I like to jump between different things which is how I ended up making the intro visuals.

I was looking for something else but saw your edit for this part. But yes, the level cap of 20 for this was because that was a little above what I usually ended up at in my playtests. Seemed like a fair (and even level) cap. When more areas are added the cap will raise as needed. The idea is that players will reach the max level (99) by the final boss, provided they do at least a good chunk of the optional content.
Last edited: Apr 8, 2021

Thank you so much for the list. It'll give me something to do after I find a place to plant my new banana tree.

EDIT: okay, I am stuck on this one. I revisited every conversation site and nothing is there to find right now. But, while I have found the "Connector" map in the witch's cave I cannot find a map named "W/E Passage". But there is a "W/E connector map" just to the west of "Witch's Cav-Telles Entrance". I assume they are the same thing.

You say 7 conversation points are "Required" so is it absolutely impossible to not activate one?
Last edited: Apr 9, 2021

kimo said:
Thank you so much for the list. It'll give me something to do after I find a place to plant my new banana tree.

EDIT: okay, I am stuck on this one. I revisited every conversation site and nothing is there to find right now. But, while I have found the "Connector" map in the witch's cave I cannot find a map named "W/E Passage". But there is a "W/E connector map" just to the west of "Witch's Cav-Telles Entrance". I assume they are the same thing.

You say 7 conversation points are "Required" so is it absolutely impossible to not activate one?
Click to expand...

@kimo
Hmm, that's weird. Yeah, the W/E passage/connector is the same thing. If you went to all 11 of those places, then either I messed up my list or you found some way to skip one of them I need to fix.

That's a full list of all 18 locations. I am not sure which one you're missing or how it got missed. The only required ones I might think could be missed are the ones in Twisted Valley and Flora Forest because they don't appear until a certain switch is turned on, but I still wouldn't get how they didn't appear then when the switches should have turned on. At the very least, no Friend Conversation should disappear from the map until its been viewed, they all have a Self-Switch on them.

I would say maybe I forgot to increase the count for one of them, but @Lady_JJ was able to get all 18 so I'm not sure about that either. Honestly I am unsure how that happened.

"Cloud Bass" in last cut scene. Should that be "Cloud Base"?
Thanks for all your help with the conversation points. It was the Castle Foyer (#006) I missed because I didn't climb those short stairs.

But, in my journey looking for those points I discovered a hard break issue. I decended the Coastal Path from the Mansion area. If you do not have a boat, there is no way to return upwards. A simple fix so it's good it happened to me. I have a way of breaking things and your game has been incredibly well constructed and therefore a joy to play. 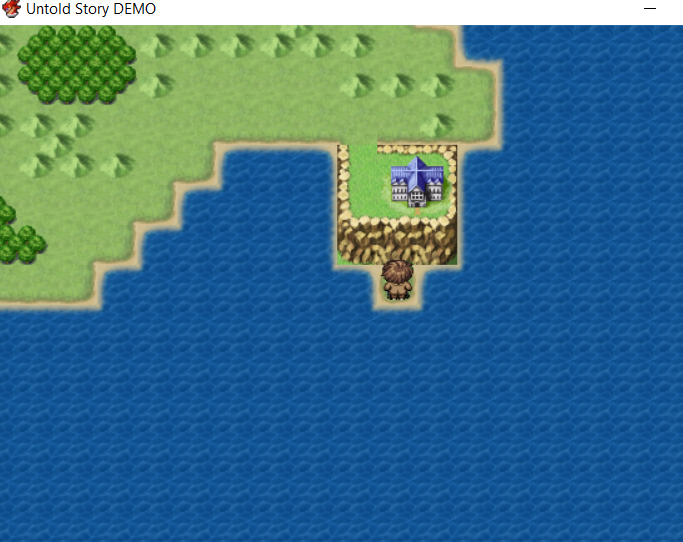 kimo said:
"Cloud Bass" in last cut scene. Should that be "Cloud Base"?
Click to expand...

Glad you found the one you needed! (That also means I don't have to panic about them being broken)

Thanks for finding that issue! I knew there was potential when making a 1 tile area like that, I thought I got most of the issues but it seems some slipped by. I'll get that fixed soon.

Edit: Fixed one uploading now. I made it so that the game checks if you entered that location from the sea or from the mansion. Entering from the mansion won't allow you to leave the area from the shore since the characters know they don't have the ship with them.
Last edited: Apr 9, 2021

Hey!
Quick update for everyone.

Last night (May 10) Studio Blue was nice enough to do a live stream critique of Untold Story!
They played an earlier version of the demo so there are some differences between the video and what's live now, but their advice (and chat's advice) was helpful for several things I can still improve upon and work at so it's still extremely helpful and a fun watch!


While I'm here I might as well just give some other updates:
-Forward progress is going along nicely...except I recently broke my pinkie so I kind of have to slow down or outright stop working on it as much as I could. I can still do somethings so I'll work on that, but it's gonna be more behind.
-I am adding an in-game list of collectables (like Friend Conversations and Hidden Items) so players can easily reference where they are for themselves or others.
-Thanks for everyone's support on this!

I watched quite a bit of it last night. Nice that the overwhelmingly response was favorable. It did seem, though, that Steel never got over the fact that the professors 'threw the students to the wolves' (or maybe that should be 'residues'). It was a fun watch, though I wish they had moved a little more quickly and played a bit more. Hoping your pinkie heals well.

Their comments about the your story text (like in the town hall) can be "easily" fixed. I just look at this as a demo that needs polishing. I assumed that you may have added text as a patchwork fix for explanations you felt necessary and that you will be reviewing the entire text for flow at a later time. That's when a solid written script is incredibly helpful even if it is a giant pain.

Some of Steel's comments were somewhat petty considering it is a game and he apparently requires logic as part of a RPG game. When auditors make petty observations, you are generally doing well in business.

But he also really liked some aspects of the game and readily gave you credit for that.

Good luck with that pinkie finger. I broke a tendon in one of mine many years ago and it never regrew the tendon. Keep that splint on and don't worry too much about the game's progress. We'll be here when you need us.

Can't play the demo right now as I'm on mobile and away from home, but reading the description for the combat system being instant action and being able to choose actor action order, I was wondering which plugins you're using to achieve that. Or did you commission a custom one for the game?

Milennin said:
Can't play the demo right now as I'm on mobile and away from home, but reading the description for the combat system being instant action and being able to choose actor action order, I was wondering which plugins you're using to achieve that. Or did you commission a custom one for the game?
Click to expand...

You're able to do a lot more with the system such as giving the party more actions per turn, or making it a large amount of action points for the entire party that can be spread across everyone, but I just kept it simple and let each character have only 1 action per turn (aside from one accessory).
You must log in or register to reply here.
Share:
Facebook Twitter Reddit Pinterest Tumblr WhatsApp Email Share Link

What features would yall like to see in a quest system?
29 minutes ago •••

coucassi
It's a common thing to forget eating &drinking while you are working concentrated, right?
If I had discovered RPG-Maker before moving together with my girlfriend, I'd have died of dehydration a long time ago.
Yesterday at 8:03 PM •••