@mlogan Yeah it won't let me edit tags or title so you can edit it as you please. I just wanted people to see this and beware as I used a soulpour777 script early last year with no clue he had been banned or accused of anything.

@Poryg It seems as though he looks at mog's code, figures out how mog does it because he can read and edit code and then makes the script. Because the scripts do not match up, but as you said he should be crediting mog and should have mogs permission to edit the codes.

@Aloe Guvner Yeah he has moved on, to copy people once again. He probably does know the code but you know if someone makes a breakthrough he will be copying with no credits to that author.

To me the grossest copy is the character selection script. The others are very subjective maybe he made and they just have tons of similarities and blah blah. But you don't even have to look any further than just how the graphics and the design of plugin is to see he totally copied MOG on that one. His reputation has been destroyed to badly to continue making any money off of rmmv, or any of the other engines so he is forced to move on. "Dishonorably Discharged", if you will.

You can edit your thread titles by editing the first post, then hitting the Use Full Editor button.

Shaz said:
You can edit your thread titles by editing the first post, then hitting the Use Full Editor button.
Click to expand...

Ah I just found that on the thread tools, thanks. I just saw mog actually tweeted himself yesterday about this very topic [ironic], he says he has further proof soul has stolen a lot of his MV plugins as well. All the more reason to avoid them! 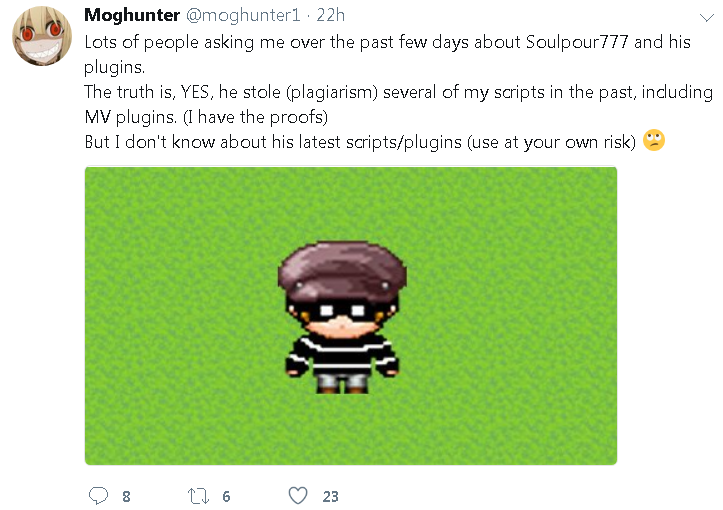 Soulpour has admittedly stolen a couple of plugins, but told me he doesn't steal anymore. Maybe it could be true, if you look at the date of the proofs, one of them is November 2015 and the other one is January 2016. And he has made plugins even after that, till mid-late 2016
I will not play a detective on how much is or is not stolen though, since soul's plugin links are broken and from videos we cannot see that much.

It is too bad, really. From what is appears this person does have genuine talent. I am still at the level that I can oly modify scripts (naturally only those that allow it) and would never dream of claiming it as my own, expecially not selling it.

Canini said:
It is too bad, really. From what is appears this person does have genuine talent. I am still at the level that I can oly modify scripts (naturally only those that allow it) and would never dream of claiming it as my own, expecially not selling it.
Click to expand...

Yeah I just feel like money was the motive. Unless he was just an attention seeker there would be no other reason to copy other peoples work. He could write scripts but didn't have the breakthrough knowledge others like MOG had so in order to be able to sell scripts and release free ones that would gain him a few ******* subs he had to copy or "git gud", and he chose to copy.

It is a shame but I am starting to feel like I am kicking the dead horse I just wanted to thread up for knowledge not to throw him not only under the bus but under the concrete.

I'm just annoyed since his one plugin to add the escape command to the Actor Party Command is kind of a necessity for me right now.