i would like to play "Sprite_StateOverlay" (which are the default State Animations) on events outside of Battle..

Spoiler shows where the Functions is located, but i am not sure how the Function get triggered when SV battle happens.. 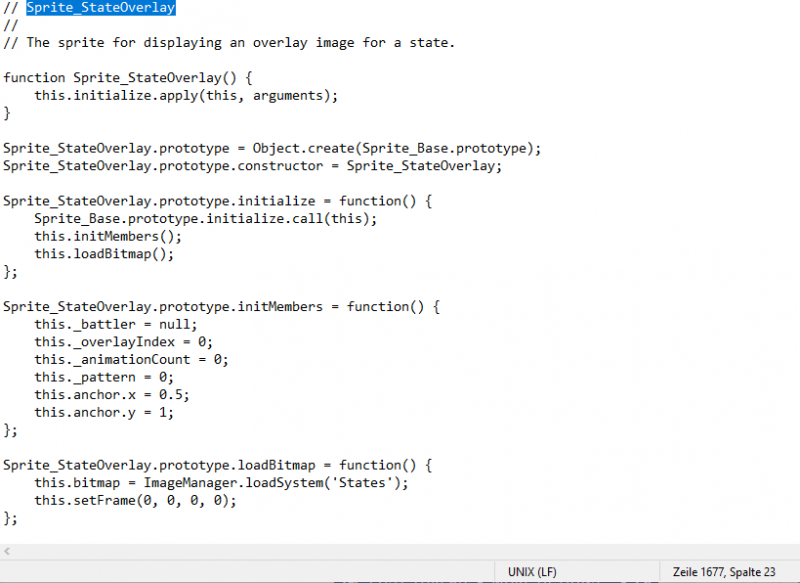 I think there is a function that disables the "Sprite_StateOverlay"-functions outside of SV Battle.
(yep battleEngineCore)

I got no idea how to script this, i would like a script that allows me to Display The StateOverlay based on The Event Id
(to be displayed over the Event similar how it would be displayed on SV battlers)

The Unit Events that i will use have also a "battler"-part but i couldnt figure out ,how to use that to play the StateOverlay Animations on these UnitEvents..

These are added as child sprites to instances of Sprite_Actor and setup when a battler is assigned:

JavaScript:
In this case, "setup" just means telling the overlay sprite who to reference (e.g. actor 1) so it knows what frames it should be showing. After setup, the sprite updates itself. (This is how most of RMMV's sprites work.)

Map events have their walking sprites stored in the map's spriteset:

JavaScript:
So by default I think the sprite for event ID x is stored under the spriteset's _characterSprites array at index x-1 (because indexing starts at 0).

So if you have a battler for each of these events, you could try something vaguely like this (untested):

JavaScript:
Could probably be done a lot more neatly in an appropriate context; this is just a hopefully-functional example to explain what I'm talking about~

caethyril said:
So if you have a battler for each of these events,
Click to expand...

at the moment i still didnt figure out all of your posting but thx anyway i will work with that
(but i am trying to give more information ,perhaps that might help somehow)

well the UnitEvents contain a battler aswell as an actor OR enemy ID..
perhaps using these Actor/Enemy IDs would be better=?
->the problem on enemy IDs is that, several Enemys can be a cloned version (same id),.. that doesnt happen on Actors..
=> however thats why i thought event ID is the best way to go..

Also i will probably need to use a "If condition" to ask about if the Unit is affected?
-> or is this handled with the state setup, where i can choose the overlay for a state..?
EDIT// it will always trigger the state overlay with the state that has the highest priority
=> i wanted to use a script that checks all events if they are "actor/enemy".. this script can adress both types.. the map event aswell as the battler..

here the Script to adress those events for better understanding:

JavaScript:
Example IMGs for an EventUnit. This one use Event ID 9 and stores the Actor(img1),which stores the battler(img2) at the bottom 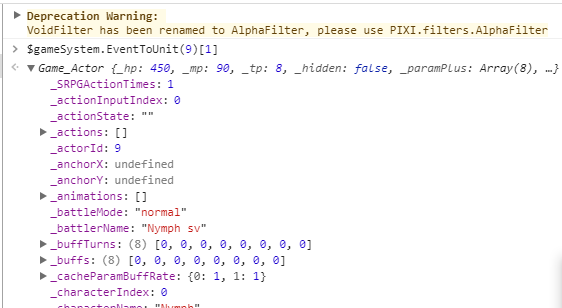 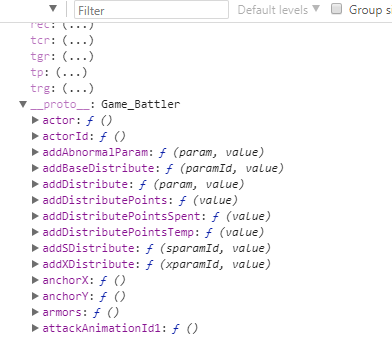 ---
Another approach..
i dont know if that is helpfull but there is also allready a function that display char frame over the normal event char frame.. in order to add the turn end sprite
(i edited that function to be able to use more frames without conflicts,, basicly by changing the loaded img..) 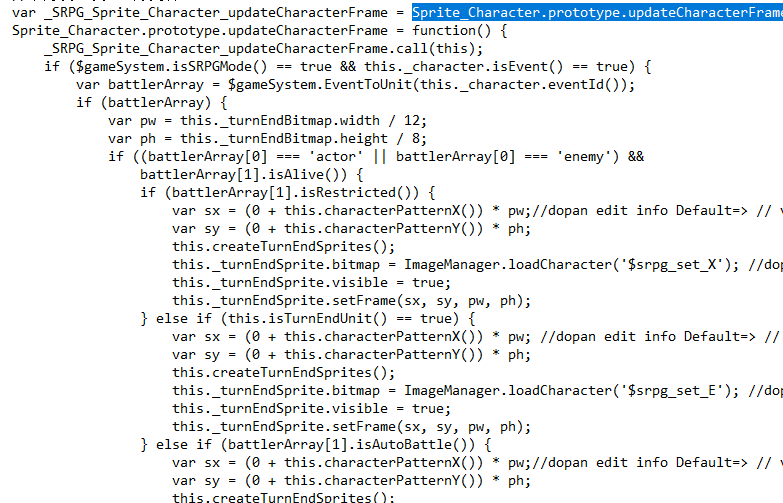 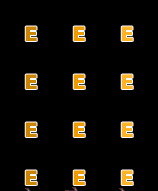 But i think this is different because it uses the char animations and not the system state img
Last edited: Dec 5, 2020

Globally, it looks like $gameSystem.EventToUnit([eventId])[1] might work for the battler reference? Remember to replace eventId with the event's ID (or use it as a local var like I have done in my example).

Edit @Dopan: this "add state overlay sprite" stuff would have to be done when arriving on the map, either via a Script command in an event or a plugin. I'm not concerned about the enemy thing...they must be separate battler instances otherwise you'd have problems with them sharing HP etc.
Last edited: Dec 4, 2020

I think i have to figure out how to make the "_spriteset"-Part active on Map.. but perhaps that might provoke other problems .. idk
edit // the reason was , i used "scene menu" before opening the console.. more info in the next post
Last edited: Dec 5, 2020

Dopan said:
i tried this, but it seems my main Problem is, that the "_spriteset" part is "undefined" outside of sideview battle..
Click to expand...

I just tested in a project without plugins, and on the map SceneManager._scene._spriteset returns an instance of Spriteset_Map, as expected. It's the container for all character sprites (player, followers, events, vehicles) etc.

I'm guessing you either mistyped when checking the console, or one (or more) of your plugins completely overhauls all of that...?

caethyril said:
I just tested in a project without plugins, and on the map SceneManager._scene._spriteset returns an instance of Spriteset_Map, as expected. It's the container for all character sprites (player, followers, events, vehicles) etc.

I'm guessing you either mistyped when checking the console, or one (or more) of your plugins completely overhauls all of that...?
Click to expand...

my bad, it was because i always go to scene menu before i open console f8 ..
( i am doing this to avoid "request animationFrame" issue.. info img) 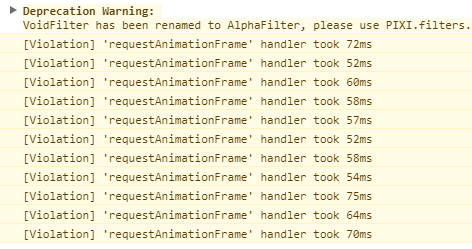 thx for double checking with an empty/clean project
@caethyril
you are a Genius! , your code works fine.. i tried this without going in "scene menu" & ignoring the "violation" info..:

JavaScript:
so actor 9 with event ID 9 will indeed display the poison State if affected!
(after puting your code in console and closing console)
.. I am pretty sure i can do that on all Units without help..

The only issues left (no real Issues):
1. This will always just display the state with the highest Priority,there are Plugin requests for rotate trough states or display several states, but i couldnt find a plugin that does it^^
(not even for the default SV battles)

2.This will Stop/End as soon the "Scene menu" was opened.. and has to be refreshed after going back to "map Scene"..
(i am not sure why, but that should be no problem, i can refresh the function..)


about 1:
i think the best way would be to add a rotation betwen the states, but i think thats not so easy because i couldnt find any plugin that does that.. even not for SV.
Or using StateNote tags that decide if this state is a "rotation state" or a "parrallel state".. without StateNote it would be a "Default state" that only shows up if its the highest priority
(i got no idea how this could be solved , i think i can use normal animations as walkaround for "special states" like "aura".. also i think displaying to much states could get laggy.. i already tried that with animations for all states and rotation via CE.. instead of using state overlays)

about 2:
I think when i make a function that "returns true" on battlemap whenever active.. i can easyly refresh it whenever its "NOT true" outside of "scene menu" on Battlemap.
( i am pretty sure i can figure this out myself.. aswell as adding all Units on map to the Function.. not just actor 9 )

*Battlemap means , when SRPG battle is active.. which is the same like "map scene" but only with the battle modus active.. where Events become Units ect..

JavaScript:
i tried to use a Game battler prototype at first to get the event id of every Unit, but that didnt worked well..

Here the proof that it works on All Units Now^^
(enemys have "enemy state" , actors have "friend State", actor9/nymphe has "poison state" with higher priority)

hearts = friend state
fireface = enemy state
green bubbles = poison state (higher priority)
This thread will be reported as Solved,..to be closed
if "about 1" should be solved or needs more questions,.. this can be made in an Extra Thread
Last edited: Dec 5, 2020

Good to hear it's working! For your questions:

caethyril said:
Good to hear it's working! For your questions:

about 1
thx i will look into that,..perhaps that might be helpfull for more Plugin Functions

about 2
I think thats not needed because SRPG has Phases and Subphases that tell me where we are..
i can use them to make "if conditions" which controll when a refresh should happen
( to be honest .. again i dont understand half of it yet anyway^^ but i will look into it anyway to learn more^^)
=> i allready solved most of it.. shown in the "3rd Edit" in the posting above^^