Variables not being set with coordinates. 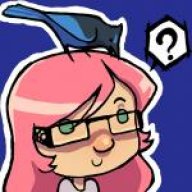 I'm only just starting to try out this program, so I'm just following some tutorials but I'm already having problems, haha!

This is my event:

Note the four lines after the first comment. I'm trying to set those variables to the player's and the event's coordinates. I've got a text box that pops up when it's done setting them that should display all the variables, however...

I know I'm doing something wrong but I don't know what.

When using the "Control Variables" command, you should usually select a "Single" variable from the top box, not a "Variable" variable.

When you select a "Single" variable, the variable you selected is modified.

That is also the difference between the "Variable" (= Single) and "Variable ID" (= Variable) option from the bottom box.
Last edited by a moderator: Aug 21, 2015

A-ha! Thanks so much! That's exactly what it was.