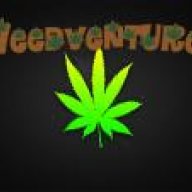 
Welcome to WeedVentures. It is a game made by Bencraft Productions. WeedVentures is based on the so called "MLG" vidoes around the internet, which goes a lot on loud noises, weed, darude - sandstorm, shrek and a lot lot more! Even though the main goal of the game is to find The Holy Kush (Weed), we do not ENCOURAGE WEED! Do not do drugs! I posted this post earlier, but i posted it on the wrong section, so im trying again, and that was a long time ago, and much have changed with this game!


WeedVentures is about a boy named "The Noob" which finds himself talking to the god of weed, that tells him to find and retrieve the holy kush, because it has been stolen. The Noob takes on this quest and must do a lot of things to get there, he encounters King Snoop Dog, Bub Marley Jr, Dogie the dog, Darude - Sandstorm and many many more!


The game follows the path of a normal RPG, such as spells, quests, dungeons and loot. There are 30 levels, 9 dungeons, many cities, legendary questline, main campaign, sidequests and much much more! It uses sideview combat and humor.


The game is not finished until i get some good feedback from people who have played the game, since i am starting to lose some of the touch to keep on going, but if i get some nice feedback i will continue! There is an download link longer down which will take you to the website of the game, it is totally safe, if you dont believe me run a virus check!  [SIZE=large] [/SIZE]


[SIZE=large]UPDATE: If you want a better experience skip tutorial, it is bad, and i should make a new one thank you!  [/SIZE][SIZE=large] [/SIZE]


GAME FLAVOURS: Comedy - Its totally based of MLG videos.


Dungeon: The Fallen Mine.


There are more dungeons in the game, but only the first one is implemented yet
Heroes:

Name: The Noob (Or whatever you choose to call him)


Magic: Can learn all spells


Special Abilitys: Can learn all


Armor: Can wear everything

There are more heroes in the game, but only the main character is implemented yet

[SIZE=large]Okey i hope you will enjoy the game and have a nice time playing it![/SIZE]

Jiggykoopbob
There are so many coding terms that are complete gibberish to me. Like what the heck is "Return" or "Array"??
Yesterday at 7:29 PM •••

Does that count as poetry? ..Is there a super fast way to test my creations in RPG Maker? Has anyone played the new Pokémon games? I'm itching to buy it but I don't think my husband will want me to after he finds out how much I spent on Christmas!
Yesterday at 4:40 PM •••
oscarcancer
I'm new and confused
Yesterday at 12:04 PM •••