A scene of despair.​

It is despair, our daily means of subsistence, after all.

This was the first thing that came to mind. 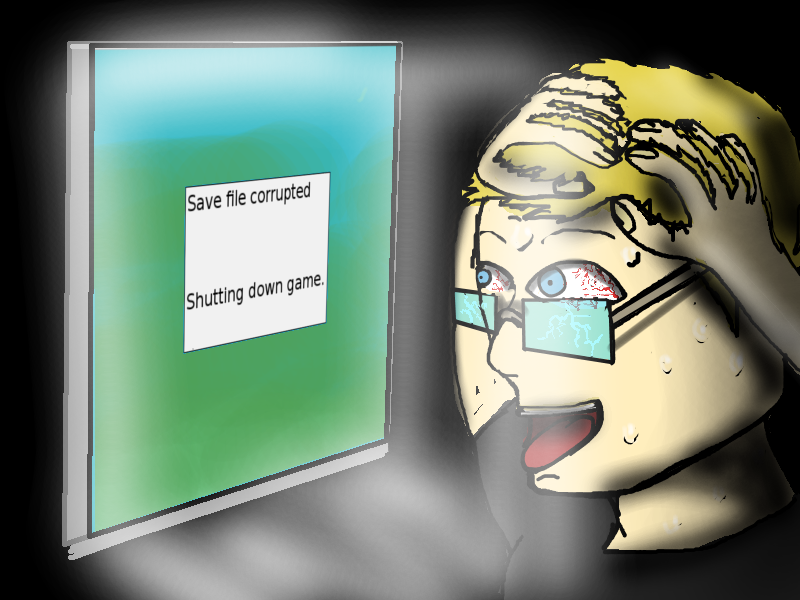 If we're talking about despair then I already have a picture ready that I drew a little while ago. Thing is, I'm not sure if it would be "appropriate/ too heavy" to submit here...

Go ahead. Just put it in spoiler tags and give a warning beforehand or something ahaha.

Bleh...not sure about being able to finish making what I wanted for this week's challenge...which is a REAL tragedy because I like this subject matter. :<

I smell huge perversion, despair and rape in the air, but whatever...that's why I love it...ahahah

Tried drawing with a mouse in flash... I think I got the point across Nice one Talo! That brought back some memories of bosses that were just to much. Oh the despair I felt!

Chaos Avian... somewhat?! I would say Graphic Content, I don't think its somewhat at all... besides that its a nice drawing and it does invoke a feeling of utter doom.

Nice one Talo, yeah, we`ve all definitely been there at some point. 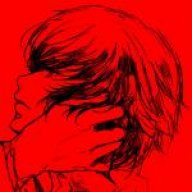 No I wasn't trying but I wanted to draw the game cover, and let people know that the struggle is real; you're not alone. Well, I was able to spit something out, but I'm a little disappointed in it. This may either be due to the fact that I didn't have enough time to work on and complete the original piece I was working on for this contest or because this track sounds dated (to me, anyway). Does it invoke the feeling of despair or sadness? Sure. But I dunno...

Anyway, it's titled "You Lose." Not sure as to why...I came up with the idea for it a while back and remember that's what it was called back then, sooo...yeah. Name stuck on it. I wouldn't necessarily call it a "Game Over" type of theme, but I suppose it could be used as such.

Anywho, hope you all enjoy it.

I wanted to make this a lot more polished than this but just haven't had the time and just plain feeling sick lately. Hopefully the impact can still be there despite its simplicity. Gosh that looks just like how I usually imagine my worst ever despair, losing loved ones and feeling utterly hopeless. And then I'd look up to the sky, burst in tears and scream.

I don't even know why I think about that stuff sometimes but, yeah that's pretty much how I envision it. So great job Makio.
Last edited by a moderator: Mar 10, 2014

He'd been in the prison for years before she came and lit his life with images of the outside once more. Being trapped in the white-lit rooms of sterility that served as his keeping place, he'd forgotten the beauty of a flower and the song of birds in the early dawn. She reintroduced them to him, taking him on journeys to places he'd never seen before, describing things in such detail that he only realised she was blind after years of friendship, when she stumbled back into the cell after a particularly brutal session with the Master of the Keys and bemoaned the darkness.

"Darkness?" he'd asked, "Why, the world here is made of light. Night and day, day and night; no darkness to find us here. They think it will give us... ideas."

She smiled at that and explained her predicament; the child of a dictator who fell from power, caged in this darkless world in the hopes she'd never take up the power he'd once wielded.

"As if I'd want that." she sighed. "As if I ever wanted anything like that."

It surprised him, how much she knew about imagery when she, herself, could not see but he took it in stride and helped her imagine new worlds, new scenery. They joined together on journeys of imagining, often slaying evil - and at times, not-so-evil - beasts, overcoming raging rapids, dancing in the stars themselves. Chains and light-filled rooms became nothing to the escape of their minds and together they lived out worlds' worth of lives in their thoughts, providing each other a companion and, in some cases, enemy with which to share the lonely hours.

One night he plucked up his bravery and dared to take her hand and walk under a bridge of starlight he'd constructed for them. The sweet breath of sakura brushed over them as he looked into her eyes, stroked the hair from her face and breathed the three heaviest words he'd longed to say.

Her smile would echo through his thoughts a lifetime, her words back would ring in his ears for an ever and he felt time slowly slip away as they once more flew through lives together, this time with the small difference of holding hands and catching each others' eyes knowingly. Together they faced fear and hate, foe and friend and won, won, won.

One night he was alone, she having been taken to the Head of the Keys for another 'session'. His mind was afire with a new imagining that, he was sure, would delight her. This time, a larger change - a child. A family together in a world where they lived within a hollowed moon. She would be an herbalist, a healer and he would be a handsome woodcutter.

He was broken from this thoughts by the clatter of her return. The glass between their cells - making it easier for the Keepers to check in on them - showed him horror beyond any they'd imagined. She was bloodied, battered, barely able to stand. A rough hand pushed her into the cell and she fell there, awkwardly landing on her arm. She cried out, pained, and he called to her with worry. The owner of the hand turned, grabbed something, then grinned.

A meaty noise, a sound both known and unknown. Metallic light reflected in his eyes and the soft slide of bone against metal. She screamed, blood fleeing her body to the ground below.

Course laughter, door closing and slamming shut and then just the light and harsh, choking breaths. Her hand, reaching towards where she thought him to be, scratching at the ground and trying to do something. He stood, shocked. Watching. Voice unable to work as she cried his name, ever softer.

Hand reaching, failing and falling for the last time.

He watched, empty, as her face became slack; her breathing, stopped. And then he knew the fear of living on without her. He scrabbled to reach her, to grab her and hold her close; examine her face and commit every part to memory. He screamed, beating against the glass that separated him from her body, hurled himself against it time and time again until the bruises on the outside were as painful as those inside.

At last, lacking energy, he slumped against the glass, eyes blinded by the tears that swallowed him inside and out. He panicked - he couldn't remember her face or how she looked on that night when they professed their love to each other under the bridge of the heavens. He let go, screamed and cried and fled from the knowledge of her death.

Hours later they opened the cell to find his crumpled body, hand reaching as though to grasp her own. He breathed still, but one could never mistake him for living.
Last edited by a moderator: Mar 10, 2014

Sorry for the late wrap-up guys. Things got a bit tight on my end. But in any case, the poll is now up and so is Challenge #12

Time for voting is up. It seems we finally have a winner for Weekly Art Challenge #11. A big thanks to everyone who participated and to those who voted for the entries. Here's a wrap-up for the poll:

And so, the winner of our 11th Weekly Art Challenge is the awesome Makio-Kuta, who will be receiving this little badge for bragging rights.

Again, thank you all very much for your attention and participation. And please don't forget to check out our 12th Weekly Art Challenge over here~

Froggo32
I have trauma after accidentally stumbling upon vore CYOA on text adventures and then reading the description "unwilling and willing" "one half lives inside other half" Oh my.... And peoples comments... "please add pregnant" "very good" "the best vore CYOA ive ever seen"...what...I wanna vomit, seriously. Its horrible.
Today at 7:29 PM •••