Remake something either of yours or from the XP/VX/VXA RTP in a sci-fi inspired/futuristic setting.

Sorry Scythuz (oops I mean Clydous *facepalms* sorry I always get you guys mixed up aaaaaaaaa). I know you're viewing. But this theme is what palladinthug chose it's his right as the previous WAC's winner XD
Last edited by a moderator: Apr 21, 2014

This one would definitely be more challenging for me. Hmm. Full body suits and visors anyone? I'll see what I can doodle up.

Couldn't the music people take a theme from one of the RTPs and tweak it to be scifi? It's not exactly the same but I think it should count.

Best of luck to this week's participants! Make it happen! XD

Sharm said:
Couldn't the music people take a theme from one of the RTPs and tweak it to be scifi? It's not exactly the same but I think it should count.
Click to expand...

Sharm said:
Couldn't the music people take a theme from one of the RTPs and tweak it to be scifi? It's not exactly the same but I think it should count.
Click to expand...

That's essentially what I did last week though it was a theme for one of my characters instead of RTP. Took it from orchestral to pop. I could do the same thing again but from whatever to techno/ambient. Haha, I might but probably for a different character of mine, this time.
Last edited by a moderator: Apr 21, 2014

I am not good in art but I am up for pixel art, is it allowed?

Zalett Boy said:
I am not good in art but I am up for pixel art, is it allowed?
Click to expand... 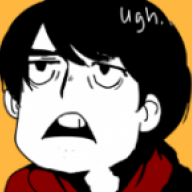 haha have a good challenge I will try to participate but my manga stole me a lot of time of mine but i will try!
Last edited by a moderator: Apr 24, 2014

Sorry I cannot participate in this challenge. Due to virus issues, I have to re-install everything.

But I may try on next challenge, good luck everyone!

EDIT: Made with MS PAINT, no stock, no pallets, no nothing, blank white.  Took me 2 hours to do the sprite sheet, this is 1 of 12 sprites on it.

Why are all the themes, Draw something,... we have writers and musicians here too.  Can we make them more vague, like, Future theme, Sci Fi theme, zombie theme etc...
Last edited by a moderator: Apr 25, 2014

That's because the Weekly Art Challenge is aimed to provide interesting challenges and themes for people (mostly art people, unfortunately). And the themes wouldn't be as fun and challenging if they were universal. Sometimes they just have to be specific and exclusive to be interesting, and I think this is one of those. That said though, we do have universal themes every now and then.

And are you sure that's something from the RTP or from your own stuff?
Last edited by a moderator: Apr 25, 2014

wow really? yes it's mine, from pixel scratch, want to see the sprite sheet I made it from: _

Also, the reason I asked was I was hoping to start doing mini games for my art challenge entry
Last edited by a moderator: Apr 25, 2014

I'm asking where the character is FROM not whom it's made by.

It's a character that is now in a RPG VX ACE game that I am making.  So it falls into my own stuff category. 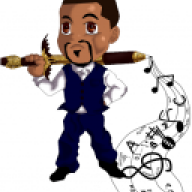 Awww, I had some great sketches as I was looking forward to such a concept... Unfortunately, my tablet has just seen the last of its life lol.

Might I suggest that the wording has a large effect on the perception of the challenge? The topic could be, "Using a character, your own or RTP, place them in a sci fi/futuristic setting." It more or less means the same thing as, "Draw a character, either yours or RTP, in a sci fi/futuristic outfit"  but removing the word 'draw' instantly opens up the topic to writers without losing much specification in the title. In fact calling for a setting I feel even gives more range and opportunity than an outfit. Remember that being too specific works against creativity. Not saying that will be a problem this week but I digress.

I don't disagree with specific subjects but I don't think any other medium should be alienated because of majority rule. True, the title said 'draw' last week and I was still able to come up with music (I'm ornery), but plenty of people will feel turned away or think their medium is not a valid entry.

TL; DR  You can get specific but the wording of the subject is problematic

Alright I've changed it. Hopefully that clears it up

Ninjakillzu
I now have an Itch.io page! https://ninjakillzu.itch.io/collector
4 minutes ago •••

taarna23
I find great satisfaction in smiting spambots. I'm not really sure why.
5 minutes ago •••

Ninjakillzu
I finally added my newly updated demo back to the website! It only took like 4 weeks of work...
37 minutes ago •••