What does "N" mean in damage values? 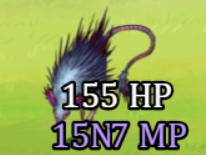 Just a bit confused why it says N7. Does anyone know why, and how to fix this?

Could this be caused from using Math.ceil or Math.max in a damage formula?
Thanks

Show us your damage formula for that skill. Also what plugins are you using?

I simplified it a bit for convenience, but the damage formula goes something along the lines of:

I put the formula into the basic Spark skill that comes with the base project.
(Note: The enemy sprite is the Rat from RPG Maker VX, but the software is actually RPG Maker MV.)

If you replace the two Victor Engine plugins with YEP_BattleEngineCore, the damage will display as something like "15 7" instead of "15N7 MP".
Last edited: Jul 14, 2020

What it means is that your damage popup plugin is borked. It's possible that it's trying to show a decimal but there's no decimal point picture to draw from so the N (for "number") is being displayed as a fallback, but that's just my speculation.

I think Yanfly's Core Engine does include simple damage popups by default, so just turn off Victor's Basic Module and Damage Popup plugins, save, and try again. Most likely you will get a popup for MP that (correctly) doesn't produce an N. If that's the case, stop using Victor's plugin, and if you want a more artful way to show damage/healing than Yanfly's default popups, you can look into other plugins like Luna Engine.
You must log in or register to reply here.
Share:
Facebook Twitter Reddit Pinterest Tumblr WhatsApp Email Link

bgillisp
And back. Trying to work online with no internet for 1.5 days was...interesting. I felt like a character in a old Sierra game trying to find internet due to all the hoops I had to jump through just to get online for work.
36 minutes ago •••