What is it with the "Change Graphic" option..? It selects the whole damn thing,

Is there some way to select certain frames of the image..? 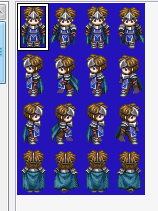 Use the "turn" command in a move route to get the frame you want, as long as one follows the other without wait commands or interruptions it should be seamless.

which "change graphic" option?
there are two different commands for this...

I am assuming you mean Change Actor Graphic and Change Graphic,

lol - an image of just the button itself without the rest of the menu is pretty useless - it doesn't show which menu or where on the menu that option is, so you've given no more direction to Andar's question - which change graphic option?

Is it the one in the main event command window, or the one inside the move route? 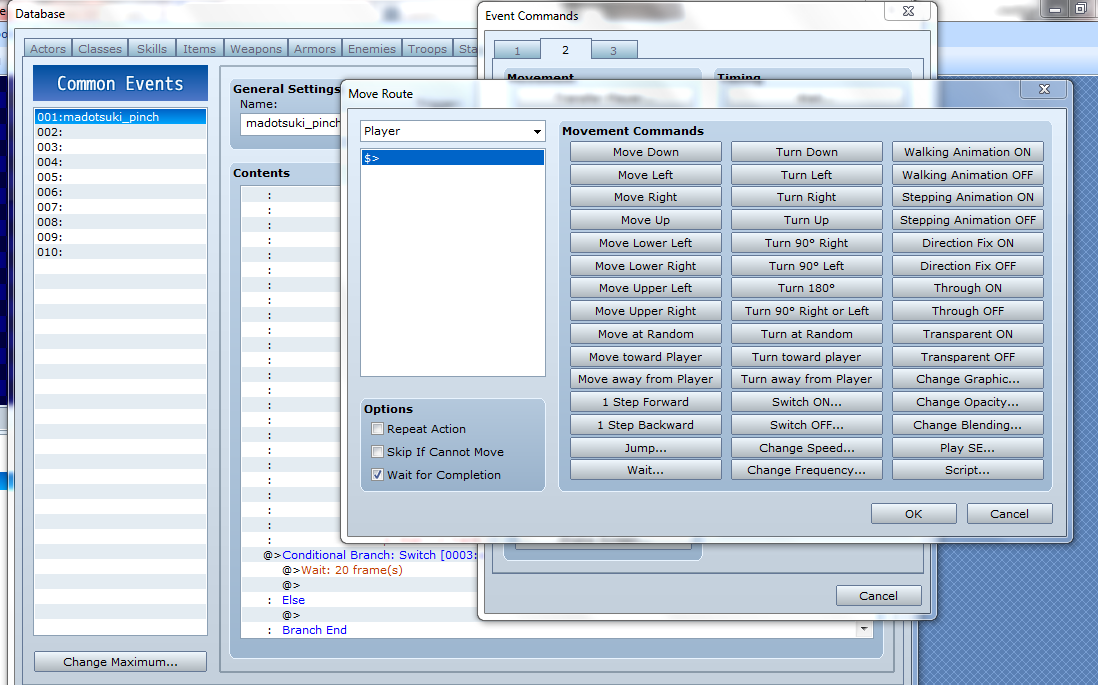 It is indeed the one inside of the move route.

The short answer is yes, it did change after XP, which has caused quite a bit of pain.

You can experiment with using Change Graphic to set the group of sprites, Turn <direction> to select the correct row (top row is Down, second row is Left, third row is Right, and fourth row is Up), and Script: @original_pattern = n to select the correct column, where n is 0 for the left column, 1 for the middle, and 2 for the right column. Make sure the script call is the last of the three, as Change Graphic will override what you set, if you use that command after.

Alright, so the @original_pattern thing is implemented into the script, as well as the rework of the move-route, However
It should work when i press the "9" key on the num pad or on my keyboard, This doesn't seem to be the case, 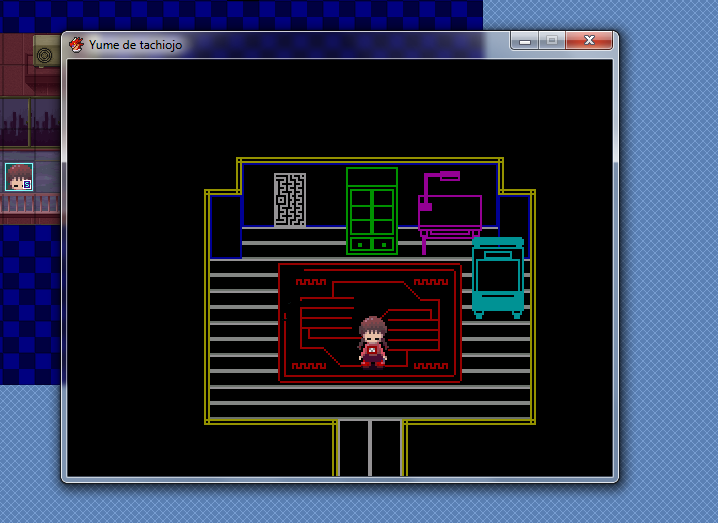 Is the script in the conditional branch "Input.trigger?9)" Incorrect, or Incorrectly formatted?

that's a big, ugly, unnecessary picture you have cluttering up the thread. Please don't do that.

What exactly do you expect to happen? In your original screenshot, all of the cells look exactly the same to me, so it could be working perfectly and you'd see no difference.

You need to do a bit of troubleshooting to make sure the command is actually being called. Add a Show Text in there. If the text displays when you press the 9 button, then the condition is true and the command should be executed. If the text doesn't display, then your condition is not evaluating to true so the key press is not registering.

You haven't shown the code in the move route, so there's no way to determine whether you've got that correct or not.

Unless the engine already handles the keys or you have a script to allow you to use extra keys, you can't just put :9 and expect the 9 key to work. By default, you have a limited number of keys available.

Ah, at this point i probably should start looking for a script,

Although at the moment i do happen to have a few scripts, none of them happen to allow custom controls or any of the sort.

As the for the move route.. 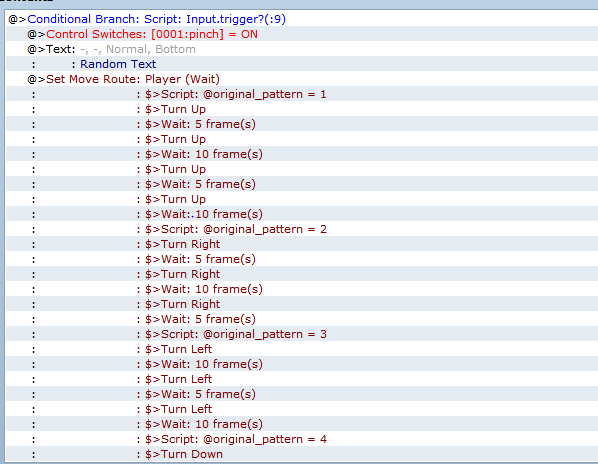 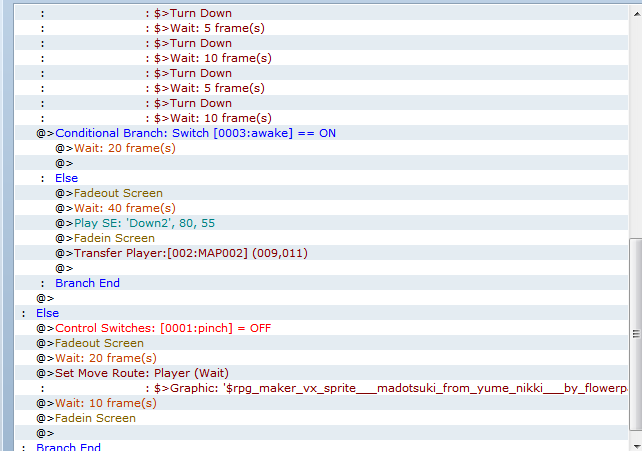 As for the Input.trigger?9) It is like i said before, l will see what i find, more specifically a custom controls script for RPG Maker VX ACE,

And then from there, fix the problem i would assume,

Why are you making the event turn in each direction repeatedly? That doesn't achieve anything.

Perhaps you should explain what you are trying to do. As I said, your spritesheet just appears to be made up of the same image, repeated 12 times.

I suggest you get the event working properly with a regular key, or an action button trigger, and then worry about scripts to use other keys. You're looking at too many things at once, and none of them are currently working properly.

I lurked on this thread to learn how to do this in my own game. All's well for me - let me see if I can clarify how it works a bit for you:

When you, in a Move Route event, run the " @original_pattern = n " script, what it does is change the event's default, resting, idle animation frame to the given number. By default, a sprite has 3 animation frames, 0/1/2, and when it's standing still it rests at 1. If you ran @original_pattern = 0, then they'd still do their walking animation when moving, but would stop at the leftmost frame instead of the middle. This behavior persists until you change use the script to set them back to frame 1. If they're already standing still, the change should be instantly visible once you run the script (though I've seen it bug out once or twice).

As far as I can tell, this script does nothing (it is probably the wrong syntax) if you put it in an actual script event, or one of the game's overall scripts. It HAS TO be in the Move Route, nothing else will do.

The screenshot you posted should be working, except that most sprites don't have any frames besides 0, 1, and 2. Also, as Shaz pointed out, "Turn Down" and such won't do anything if the sprite is already facing that direction.

I suppose that its good that is kind of working, however on yet another end, my trial for ace is going to expire soon, after it expires i will just hold off on making any more progress until the 75% sale or 50% sale, VX Ace and XP tend to be very cheap compared to their usual prices during these sales.

Anyway, For now i guess i am just going to work on my other projects, ..but then again there is also school, and that tends to get in the way of things a lot..