What other forums do you/have you belonged to?

This forum and GameFAQs are the only forums I ever really post much on. I went to Mega Man Network's forums back when they still had them. I used the Spriters Resource forum a little. A few odds and ends, mostly on random RPG Maker websites because lots (seriously LOTS) require you to make an account to get access to their scripts (really, a LOT) and I figure since I have an account, I might as well use it and post a little.

Oh wait, I was pretty active on Stencyl forums for a while. I haven't been there in years. I was even a beta tester, but I really couldn't fathom the program, though many others were able to do awesome things with it, supposedly with little difficulty. The computer I had back then was sloooow, and Stencyl lagged a lot on it, so...I just stopped trying. I intend to go back to it someday, I made quite a few friends there actually.

I pretty much have a different username on every website I use, different avatars too. Too much to name.

The only forum I've been regularly active on is a Digimon forum called WithTheWill.net, where I was recently made a moderator. I'm also a member of Yog-Sothoth.com, a forum dedicated to the Call of Cthulhu pen-and-paper RPG and related Lovecraftian stuff. For a long time I didn't do much there, but have become more active recently. Eventually I'll start making more use of this forum, once I get some of my current projects done and finally start working on my first RPG Maker game.
Last edited by a moderator: Apr 14, 2014

Probotector 200X said:
I went to Mega Man Network's forums back when they still had them.
Click to expand...

Yes! That's what the Mega Man Outpost became. What was your username there? I wonder if I'd remember you...

I used to spend a lot of time on Gaia Online, particularly the guilds section, but most of the people I knew there stopped logging on, and so I eventually did the same.

For a number of years I've been a member of A Reyvateil's Melody, which is an Ar tonelico/Gust fan forum; I've spent a good amount of time there, and most of my friends online I know from there.

Another forum that I'm a member of is AnimeSuki, though I don't spend as much time there as I used to.

Back around 10 years ago when I found RPG Maker 2003, I was looking for help on something (probably how to make a door, haha) and found Creation Asylum. It was just a month old at the time. I was a teenager then, so if I were to look back on my posts, they'd be pretty embarrassing I'm sure, but I was one of the well-known members, and top poster for years. Met a lot of awesome people there, some of which I still talk to today.

I was also registered on rmxp.org (went through many changes, hbgames now?) for a while, but those two were about it really.

Solo said:
Yes! That's what the Mega Man Outpost became. What was your username there? I wonder if I'd remember you...
Click to expand...

I never posted when it was the Mega Man Outpost. But, on the Mega Man Network's forum, I went by...Duckaiser (which is the only username I use on multiple sites pretty much) and had an avatar of Maddy (from MMBN)

Sounds a little familiar, actually... though I can't be certain of it. Thanks anyhow!

Just this one and I'm not sure if google groups count. 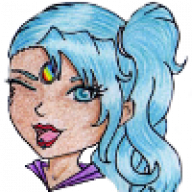 Back in the notorious teenage days, I used to crash this place called shinraonline, because, obviously, it was based on FF7 and I was totally obsessing over that game. It was... Oh, gawd, I'm so glad I'm not a teenager anymore. I'm a dramallama now, but as a teenager I was horrible. Dramatic doesn't even begin to cover it. So the shinraonline days were... chaotic, angsty and full of drama. I look back on it with a mixture of fascination and pure dread in my heart.

Then I moved on over to a place called gaiaonline, which was my home for many, many years. I got so addicted to the place, I hardly had any life outside of it at all. Don't regret it, though, cause I met a lot of amazing people there who became some of my best friends, and I've even travelled to the other side of the planet to visit some of them. New Zealand is amazing, by the way! But, yeah, gaia was my home for a long time. Then, a while back, life exploded, and I kind of dropped out of the online life for a while. Haven't been on gaia for over a year, I think.