Which one should I pick up? // sorry if this has been asked a kabillion times... 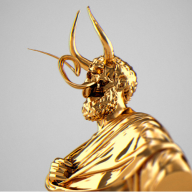 Okay, so a long time ago when I was just a little kid I had a lot of fun with RPG Maker Value and 2003. I started trying to make my first real game in 2003 because I was familiar with the program. Years have gone by and now somehow I'm feeling like trying to start again, the same game I thought about and worked in but with a new life perspective.

I am a musician, not a programmer, and I have always been stupid when it comes to understanding programming. Either that or I don't have patience enough to get all the languages available to work with one and create something from scratch. Since I always loved RPGs, or games that had some sort of RPG base (I was doing a sort of Survival Horror but with all that an RPG requieres, except for the combat system which was custom and the menus). I know the RPG Maker 2003 gets truly limited too when you try to do something a little bit different than what's expected. That's why I need to ask you, the community, to help me with this.

I'd like to work again on my project, I want some sort of a more modern progam and I know the possibilities get higher with the latest versions compared to what I was used to. But one thing I have always disliked since RPG Maker XP is the graphics and its resolution. I want to make a game with low resolution, emulating either a Nes or a Snes, but not much more than that. I want to work on my own pixel art but I always saw, since "To The Moon" (was it called like that?) gained popular and critical acclaim, that I didn't like that particular style. And hell, it was and is an RPG maker game, and also, it is done with the RTP that comes with the program. That made me want to try again, but I decided not to.

Now I think it might be the time. But those kind of graphics annoy me, I don't like how the charas move, how the maps are done and it is mostly due to the resolution change. So, my question might come pretty naive but it is what it is.

If I want to make a game that somewhat looks like... Mother, or Undertale, which system should I pick up? I want more freedom when it comes to making the game itself, but it needs to look as it is supposed to look. If not it would be another RTP clone among a lot of well done games that are actually fully RPGs.

Any reccomendations? Thanks and sorry for the writting, I'm spanish.

If you want your game to look like Mother or Undertale, you're going to be doing the artwork yourself which means it doesn't matter which engine you use - you can make the graphics look like whatever you want regardless of the native resolution.

If you're not doing/buying artwork and will be using the included graphics to some degree, then clearly get whichever RPG Maker matches your visual style the best.

In the first case, if you're doing the artwork, it makes sense to get MV or MZ - the change to JavaScript makes pretty much anything doable in your game. MZ is newer and still supported, MV has a larger library of plugins available.

Thank you so much,

I used to rip old games graphics and also did my own, but this time yes, they would be all done by me so if the native resolution allows me to use those kind of sprites I guess I will buy one of those Makers. I thought people were going to recommend me the VX Ace for some reason.

I think you're overthinking/misunderstanding what resolution does...if you're making your own art, you can make it look cartoony or pixelated regardless of what the actual resolution of the game window is.

If it only had to do with resolution, retro games wouldn't look pixelated, they'd look almost too small to see for how few pixels they take on the display

If you were to play Final Fantasy, say, its characters are 16 pixels tall. Say you're using an average 14" laptop, set to a 1920x1080 resolution. The Final Fantasy character sprite would be about .1 inches tall on your screen.

Instead, modern versions of the game (remastered, emulated, mobile versions) expand the display to better fit your screen, and many laptops are configured by default to scale up elements on the screen, so that one pixel in the game becomes one block that is many actual pixels on your display.

So regardless of the resolution of your engine, you can simply choose to draw that way, making your brush be a square block and drawing at the level of detail you want to show in your game. Any modern retro/pixelated game is not actually forcing your monitor into a lower resolution to play, the artwork is just all drawn to be large and blocky.

I get what you say and it's pretty possible, all I knew is what I saw since I used the Maker maybe... six years ago, minimum. So all I've seen practically are games that either use the RTP or get that same resolution, and I thought even if I was about to create my chipsets from zero I might not be able to use such a classic pixel art. Maybe that was being "too old". So actually your answers are very helpful and now I feel I can pick up the one that seems to suit me more regardless of how it looks. I don't want to use that type of RTP, that's all. I simply don't like it and even less for my type of game.
Last edited: Sep 27, 2021

Excuse me the double post, I already bought RPG Maker MV which was at 15 euros these two days. I'm glad I asked and thank you again for the help.

@doomzdei To avoid double posting, you can just click edit.

I know, I just wanted to make clear my issue was solved, and an edit doesn't show unless you enter.

doomzdei said:
I know, I just wanted to make clear my issue was solved, and an edit doesn't show unless you enter.
Click to expand...