Hey! I think this is the right place to put this. First, I'm going to post a gif of what I'll be talking about.

As you can see on the gif, the spear woman just teleports in front of the first character to protect him from the blow. You know, basic substitute stuff. That's fine. I was wondering, however, if there was a way to use Yanfly's Action Sequence to actually spruce up her movements/have her do her guard animation, whatever. Something that isn't teleporting and then sliding back home like she's doing currently.

Since Substitute is a flag in the database, I wasn't sure how to go about adjusting it so I figured it wouldn't hurt to ask to see if anyone who knows a bit more about all this stuff has any ideas.
Thank you!

So, the ways you could approach this (that I can think of):

1 - If you want to use action sequences, those only execute when the skill is being performed. So what you'd have to do is write out a portion of action sequence that checks for the presence of the Substitute flag in the defending party, do the motions you want, then copy that code into every single attacking skill that you want to be able to trigger substitution. It should be possible.

2 - Change what happens in the code for Substitute. I think it's in rpg_manager.js, look for where it queries "checkSubstitute" and find the portion that actually transfers the damage, then write a plugin for that function that adds in sprite movements. This, of course, would require the use of actual JavaScript commands used by the engine, not the simplified action sequences.

@ATT_Turan Yeah, I thought about number 2 but once I found where it was, I had no idea how to call the poses, haha.
1 sounds a little a lot since it has to be present on every enemy skill that can be substituted, but that might work out. Do you happen to know how I would be able to do that check?

The actor member function isSubstitute() will return true if that actor is currently flagged to substitute for their allies. So it's easy to write a loop that looks through the game party and sees if anyone has that.

The tricky part is that the action sequence commands use "actor x" to control battlers other than the user and target, and there's no way to use a variable for that. So it would get really convoluted as you do an if check for every single party member to see if they can substitute, then repeat the action sequence code four times.

Still definitely sounds DOABLE just convoluted, haha. I'll give it a shot this weekend but in the meantime, totally open to anyone else's suggestion!

And by "actor x" is x the number the character is in battle (so 1-4 essentially)? Since this character only ever takes up spot 3 and 4, that would cut down on the convoluted-ness if that's the case. Also I'm sorry for the really probably obvious question, plugin stuff is usually over my head.

The actor one is actor ID as defined in the database rather than party position, but I'm pretty sure there's one for party member as well.

Oh, if it's actor ID, then I wouldn't need to repeat it four times then since only one person can substitute?

So if you have your party composition and position locked (only this character can use the substitute skill and they're always in party slot X), then this is much more doable.

Here's a quick example that I did not test, but I think is correct off the top of my head. You'd put it inside the target action section:

Code:
So this should see if your third party member is flagged to substitute, jump them in front of the incoming attack, take the damage, and jump back. If they're not flagged, the regular target takes the hit.

I think that the "actor x" command uses the party slot like we would number it (1-4) whereas members()[] goes from 0-3. If you see the wrong actor moving, just change which number it has every time you see "actor 3". If you want to check a different party member, change the number in $gameParty.members()[2]
Last edited: Jun 18, 2021

@ATT_Turan When I tried that as is, the numbers and animation disappeared. So I tried changing $gameParty.members()[2].isSubstitute() to 3 instead of 2, the numbers/animation showed back up, but she wasn't doing the animation (but she was still substituting). (And I also tried changing the actor 3s to 2s as an off-chance also did not work).

Code:
EDIT: OK, if I change $gameParty.members()[2].isSubstitute() to 3 instead of 2, it just throws out an error in the console. So changing the number didn't fix anything I guess the game just ignored the statement altogether?? 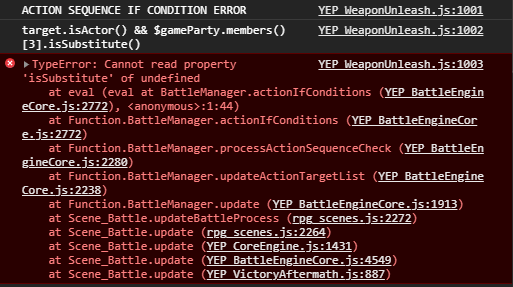 Whoo, okay, you have a bunch of stuff going on here. Let's do one thing at a time, okay?

Ronove said:
@ATT_Turan When I tried that as is, the numbers and animation disappeared.
Click to expand...

So the first thing: what exactly worked and what exactly failed? Did the party member with substitute jump in front of the target?

Ronove said:
So I tried changing $gameParty.members()[2].isSubstitute() to 3 instead of 2, the numbers/animation showed back up, but she wasn't doing the animation (but she was still substituting). (And I also tried changing the actor 3s to 2s as an off-chance also did not work).
Click to expand...

You're changing a lot of stuff, and most of it shouldn't be guesswork. Again, members()[] goes in order of your party members, 0-3. So there should be zero guessing on your part - hit Escape in the game to see the menu. The party member on top is 0. Then going down 1, 2, 3. So you know exactly which party member is using your substitute skill, there's no guessing involved.

The only question is whether the "actor 3" places should be the same number as that, or one higher.

Ronove said:
For reference sake this is how the enemy's skill is set up --
Click to expand...

I'm not going to dissect your entire action sequence, because some of it you may want to be doing intentionally differently from how I would. A few things that should definitely be done:
- Add a "wait for movement" after the jump and move lines that I gave you, I forgot that.

Ronove said:
EDIT: OK, if I change $gameParty.members()[2].isSubstitute() to 3 instead of 2, it just throws out an error in the console.
Click to expand...

Again, that number should not be a guess, it should be you looking at your party and counting. The error in the screenshot that you attached indicates you don't have a fourth party member at the moment.

I know it shouldn't be a guess, but I was just trying everything before I said "hey it didn't work". And yeah, the action sequence is old and hot garbage but it was what I was testing with sorry. EDIT: and even when I move "wait for effect" to be right after the conditional, the below still happens.

When I put the code in, as is, the enemy goes forward, the screen shakes, the enemy moves back. No substitution, no damage (it doesn't show and nothing takes damage), no animation.

EDIT x2: OK, it has to be actor 2. Thank you! I'm going to play around with this to see if I can get her in the right position (right now she jumped very high in the air which was hilarious but not the desired effect). With some testing, I can't seem to get her to move in front of the character who is being targeted. I got it.

EDIT x3: okay done with editing this post. It works with a little more finagling and I can get by with the rest on my own. Thank you so much @ATT_Turan for dealing with me!

Code:
This is the full conditional as posted by ATT_Turan below to do what I wanted. Putting this here instead of the wrong one I had before.
Last edited: Jun 19, 2021

Ronove said:
EDIT x4 because I am not done: even at full HP, she will substitute everyone, but I think that's simple enough to figure out on my own. Just fair warning for anyone else who looks at this thread. (to stop the cover anyone at whatever HP, you can do "if target.isDying() && $gameParty.members()[2].isSubstitute()", but then that makes her cover whoever is dying, even herself which is silly so I'm still working on whatever the third conditional will be.)
Click to expand...

Right, as I said, this was just a basic version for you to customize as you like. Many people want an ally who's "covering" for others to do it regardless of their HP - you want it only when they're in the yellow, and you figured out how to do that.

Yeah, I realized the isActor check is needed after I posted that edit, haha. No worries it was definitely back in there once I was reading more closely. Thank you! This works for sure. I appreciate the help!

Tiamat-86 Andar Tiamat-86 wrote on Andar's profile.
tfw just trying to help and get yelled at. /comfort
9 minutes ago •••