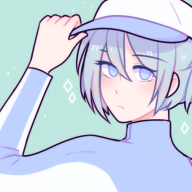 I've tried very hard to rely on existing threads whenever I encounter a problem, but I suppose one must ask for help sooner or later

Anyway, Yanfly's Doodads has been working well, but I've run into a..weird issue. I hope this is the right place since the issue only crops up when the plugin is turned on, if not please move it, thank you.
I'll try and explain the layout of my project here.

I tried to replicate the side scroll style of the game Dreaming Mary, which went well. I ran into a problem when figuring out how to interact with events, as placing them "below player" forces the player to stand in front of the event, thus blocking them when interacting. Making them "same as player" but setting their options to "through" solved the problem, as long as you know you have to stand next to the event to interact with it.

So, all was going fine until the introduction of Yanfly's Grid-free Doodad plugin which caused this weird...momentarily overlapping... thing...with the events? I don't know if it's the plugin itself, other plugins, or the structure of the events that cause it, but it only happens when the plugin is turned on. There aren't actually any doodads on this map, but the same thing occurs on maps with them.

(don't mind the blank 13 seconds at the end) 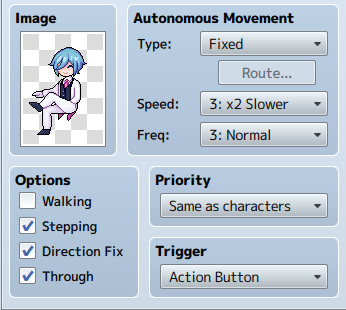 Any ideas on how to fix this? If it's an issue with the plugin and not my event setup, I can probably go without it. Thanks in advance!!
Last edited: Jun 27, 2019

so far I understand, you want to interact with the person in front. if you want to do that, you can try this:

1. make that one as normal (above or below character)
2. make an event before him and below character and action press (this to interact when action button is pressed)
3. you might need to connect the event with him as well.

If i understood you wrong, than explain it shortly what you want to achieve.

@ShadowDragon Thanks for replying, but I don't want to interact with the character from the front, since that blocks the sprite. I already achieved being able to interact with them while standing at the side. I just added this info since I thought it might be interfering with the plugin or something.

I know doodas plugin but didn't use it, so no clue if you can place character.
If it's able to place character, it has layers, 0, 1, 2, 3, 4 etc (idk how many layers)
say it has 3 layers (0 (below character, 1 same as character, 2 above character)
in this case, you would want the player below actor (like the ground layer) while the main actor is on layer 1.

Another way is to leave that character out and make a sprite sheet of him and place it as a normal event (below character)
so the actor can walk past it. so like a single actor sprite (3x4) and place a $ in front.
if none of this helps, than someone with doodas knowledge might be able to help you out.

@ShadowDragon Oh! The character IS an event though, not a doodad. It has its own full sprite sheet. The reason I didn't put it as below character is because it can't be interacted with from the side.
Interacting with the event itself is not an issue, the player passing through it due to the plugin being turned on is.
Thank you though! Hopefully someone else might figure out the problem.

through can be removed is below character, action pressed (if on the tile still get activated)
remind also, the FEETS is the tile, so if he is 1 tile up, you cant interact with him in any way.
so you need to place an event below him where you want to interact with him.

if its 3 tiles wide to do that, and have a selfswitch A, connect all of those to turn it on, or you can interact
on all 3 of them.

I'm sorry, I don't really understand what you mean. Also, all my sprites and maps are x2, so I have to be really careful about where I place them otherwise everything goes out of position. This sprite itself takes up 4 normal tiles.

Either way, the event itself is fine, I don't plan on changing it if it's not the one causing problems. I just want to tackle the problem from plugin, if that's what's causing it. 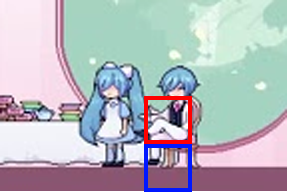 Uh, he IS on the blue square. This is what it looks like in the editor: 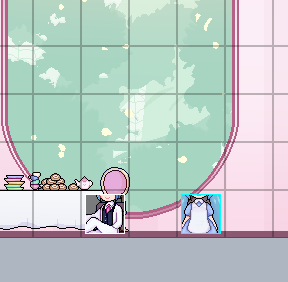 Sorry if I'm misunderstanding you. Again, the event itself is not the issue. I need help on understanding why the plugin is causing the player to go underneath it.
Last edited: Jun 27, 2019

i will look into the plugin in a bit, until then, i hope someone knows to issue for you.

Maybe instead of using it as an event, turn it into a doodads and select the layer you want it to be on.

SoSick. said:
Maybe instead of using it as an event, turn it into a doodads and select the layer you want it to be on.
Click to expand...

I was going to say this.
Just use events with no graphics as triggers, so you can put them anywhere you want.
You can activate and deactivate doodads using switches.

miani said:
I was going to say this.
Just use events with no graphics as triggers, so you can put them anywhere you want.
You can activate and deactivate doodads using switches.
Click to expand...

Hm, but wouldn't that require me to replace ALL of my events with doodads? I'll give it a shot though. Thank you!

Edit: Forgot to mention that this issue occurs with doors too, something I don't think I can use doodads for.
If there isn't really any other solution I might just not use the plugin at all since all my maps are parallax anyway.
Last edited: Jun 29, 2019

parallax is time consuming, but yes, its a good way, but its easier to event while no images are need
and you need yanfly region restriction to let the player know where to block so it cant go there or what
some does, a region where the player can walk (blocking seems easier), but bigger maps bigger than
screen resolution needs ! in front of the parallax name.

fanaticmouse said:
Hm, but wouldn't that require me to replace ALL of my events with doodads? I'll give it a shot though. Thank you!

Edit: Forgot to mention that this issue occurs with doors too, something I don't think I can use doodads for.
If there isn't really any other solution I might just not use the plugin at all since all my maps are parallax anyway.
Click to expand...

You can use an event to activate the door and another one just with the graphic. It's the easiest solution.

miani said:
You can use an event to activate the door and another one just with the graphic. It's the easiest solution.
Click to expand...

Err, I think it would probably just be easier if I stuck with events. I'm just trying to figure out if there's a problem with the plugin, I don't really want to have to remake all my events. Thanks anyway!

if you dont mind, can you strip your project to under 10-30MB (remove all sounds that arent need in that map)
so i can take a look for you? (pm me the link if you decided it (dropbox or mega upload will do, or google drive)).