I'm currently using Yanflys Charge Turn Battle system (yes, I am aware, that the support has been discontinued ) and I wish the turn order display to show more than one turn.

This is how it currently looks: 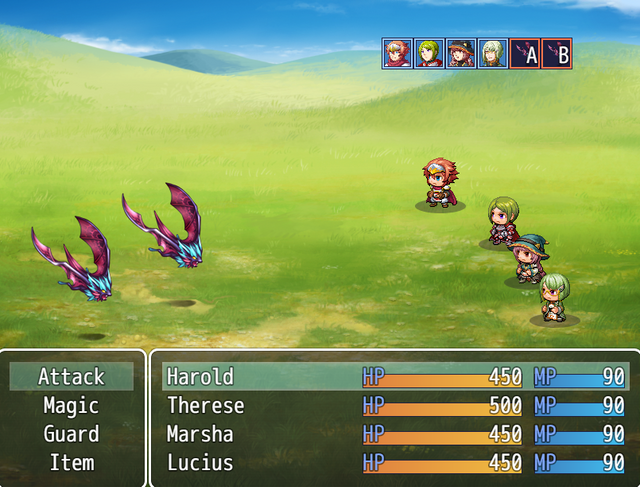 This is how I would like it to look: 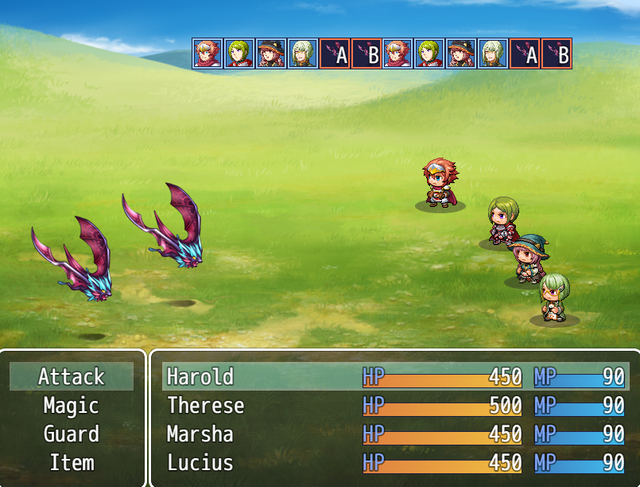 Now I'm not sure if it actually is as simple as it sounds, since it might mess up the preview for slow skills.
I've searched the internet back and fourth if someone has already done it or how to do it myself but couldn't find anything. Also, I've tried switching to a different CTB system but since I'm using a lot of Yanflys plugins, they always conflict, so any help would be greatly appreciated.

Edit: I do not need this displayed as an option within the plugin settings, it's enough for me to have this as the default look.

It would be difficult because turn order is decided one round at a time. During this round you don't even know what enemy or party members will take part in the next round - they could be knocked out, disabled, or you could even have new team members appear on either side.

additionally to the problems Shaz mentioned, one of the key reasons for using CTB is the option to change the spaaed based on skills used.
Half the notetags in the plugin deal with changing the speed for the next action.
And if a skill is used to increase or delay a battler's speed, the next turn prediction will change.

That said, it is possible to create such a larger turn prediction. But that requires a dynamic change of whenever the speed of any battler is changed. That means a recalculation of that prediction at every single skill use, because the engine can't know when the player or the AI selects a skill that has speed changes within it.
And again a lot of those skills will have speed changes - otherwise no one would bother with CTB and use regular turns.

That is what will make this request difficult - the programmer will have to take the dynamic into account, and the resulting prediction will be of very limited use to the player because it will constantly change.

I think you should confirm that you're still interested even knowing that as that will show to plugin writers that you thought about the problems - and then you only have to wait for a plugin writer that is capable of writing such a modification (which will require medium experience with modifying yanfly plugins and programming battlesystems, not everyone can do this)

Hello, thank you for your replies!

Yes, I am aware of the troubles with the longer prediction. Yanfly already takes a change in speed into consideration with the skill preview.

For those that don't know what I mean:

The turn order prediction is sorted by a formula containing defined number of ticks and the battlers maximum base agi. If the player uses a skill that has a speed lower than 0, the turn order shows a preview of how far the battler will move backwards in the turn order until the skill is used. If the skill is selected, the battler moves to the previewed position and once it's turn comes up - instead of the battle command window opening it uses the previously selected skill.

The problem that I have with that, and the reason for my request is:

It takes away the tactical gameplay that the ctb could give the player. The only feedback I gain from the current display is "I have to wait" and the next round "I still have to wait". With a longer turn order display I could read from the prediction information like "If I choose this skill, I give enemy A the possibility to attack twice before I actually use this skill"

So, since the skills speed apparently already places the battler somewhere in the far back of a larger turn order display, the biggest problem I met was, like you said Shaz and Andar, the change of a battlers state (knockout, slow, etc.) and the notetags that can be given to any skill.

My approach (based on how I understand the plugin but that could be totally wrong) would have been to enhance the turn order with a second turn of standard attacks where the current, first turn order get's sorted into.
I suppose I would need a function that gathers the current position of the battlers based on the formulas (item.speed for the speed of the skills included) so that - if the battler is about to use a skill that changes his position to another than the position of his 2nd turn order display position - the 2nd turn order display battler get's removed (or pushed back into the next standard turn turn order).
And it would need a function that checks whether a skill using a notetag has been called by this battler which also means his position would have to be adjusted in comparison to his second turn order display battler...display.

I guess what I want to say is: Yes, I see and understand the problems, I have given a lot of thought into how this could be solved but ultimately, I am not able to code this myself to just give it a try.

Now thanks for reading this wall of text I hope it also clarified a little why I want this display to be larger.

Sounds like you want something similar to how OTB displays information:
https://fallenangelolivia.itch.io/order-turn-battle-system
It displays both current and next turn.

@Zarsla oh dang, I remember I found this awhile ago and didn't look further into it because of the price. (but back then I wasn’t too familiar with yanfly or plugins in general and just didn't want to make an unnecessary purchase ^^) i'll have a look at it again, thank you!

Conflictx3
That trope is alive more than ever, not so much elemental Crystal's but gathering magical objects or doing "task" to unlock this oddly specific thing is everywhere, I saw it saw it in the IT 2 remake, avengers and every season of supernatural
Today at 4:32 PM •••