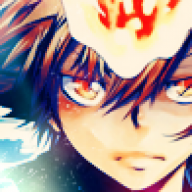 Unfortunately I forgot my first RPG's name I worked on, but it was BAD. Like, terribly bad. The game was based on TheMize18's tutorials, following all the steps of how to do this and that, etc lol. (He was an old RPG Tutorial Guy, closed his account unfortunately )

Another game I made was Final Distance. Not even a real storyline, it was just based on Tales of Symphonia 2. It's really old though.

Let's see... third game I made was Graceless Reminisce. Totally based on Kingdom Hearts Birth By Sleep xD.
Last edited by a moderator: Oct 14, 2012

My very first RM game was pretty terrible, It was on rpg maker 2000 and it was called Orphan, I never released it and I never finished it. It was a good length of a game but it was full of cliches, it was about a bunch of kids who lived in hiding in the big city, of course as the title went, they were orphans but the main part of the game was providing, protecting and expanding the kids hideout. I no longer have the game but I remember it fondly, I do hope to recreate the game one day but make it decent.
You must log in or register to reply here.
Share:
Facebook Twitter Reddit Pinterest Tumblr WhatsApp Email Link

Avery
12 done, 4-5 started. Now that the weekend is over, things will sloooowwwww down again proabably.
Today at 4:04 PM •••

F.Healer: Here it is,I made the Simple Sandwich
Survivalist: it's so Delicious!
Chef: Here you Go! My Gourmet Steak.
Survivalist: It's Super Delicious,Too!
F.Mage: I Made it for you!
F.Healer: Uhh...Charcoal?
F.Mage No,It's a Toast!
Chef: Did you Let it in 10 Minutes?
F.Mage: Maybe?
Today at 2:54 PM •••