Yumi's Overlay Mapping only works for one Map 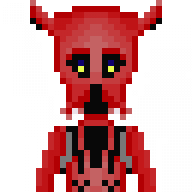 I am working on a project where the player teleports to random almost identical rooms pretty often. I managed to setup Yumi's Overlay Mapping Script, so that the player disappears behind my walls... For the first map. But as soon as I enter the second, it doesnt work there.

The file names are all according. The Overlay Switch is also on by Default.

This is the first room, I do disappear behind these walls. The right door teleports me to a random room between Map 16 and 18, they all have a file in the Overlay Folder, but when I teleport there, there is no overlay. 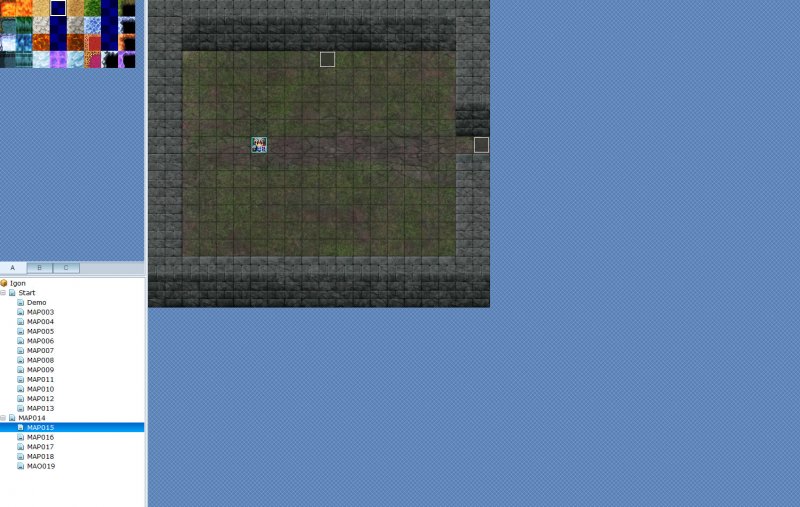 This is the teleport command, I also set a few variables there. 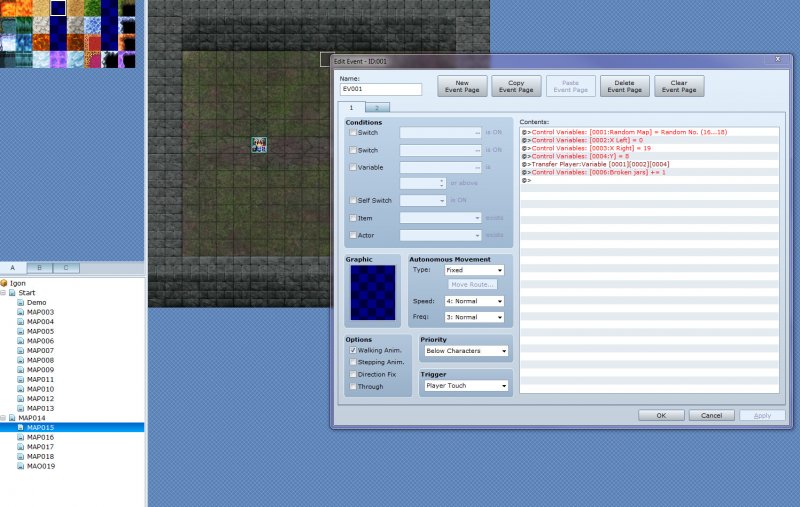 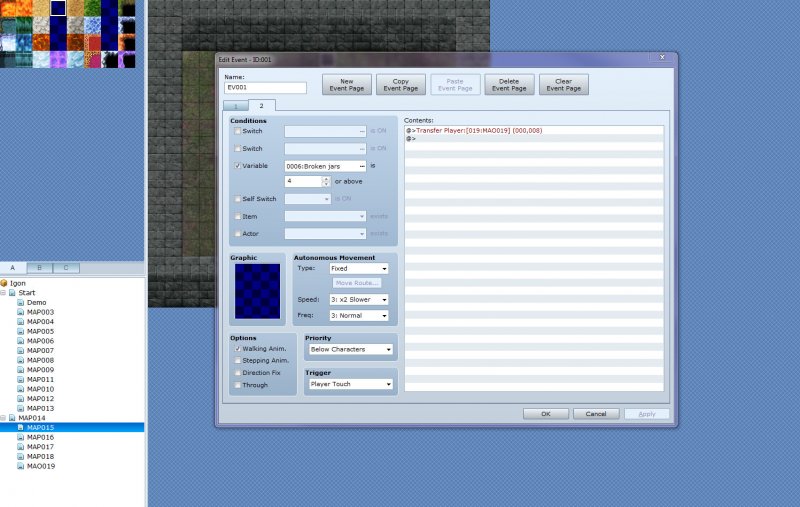 Does someone have an idea, why the script only works on the first room? I also tried a few other scripts and it never worked there as well. So something has to be wrong in my setup.

First can you put a link to the script. Just to make sure we know exactly what script you are using.
second I would ask if all your overlay images are .png
the script says that parallax must be png.

Here is the script:

Please put a LINK to the script. Scripters generally don't like when you paste their scripts everywhere, because if they make a change, the old version is still floating around. Also, the thread or blog post where the script is introduced usually has more useful information about how to use it.

It's Yami, not Yumi

There is no website with useful informations, it is just a big folder with scripts in it
Last edited: Jan 22, 2020 New version download Since some people like the overlay mapping (aka parallax mapping), I have code this thing to Ace. I have used Hanzo Kimura’s idea to make this, of course this script have…

Unfortunately there are no further instructions there either

You've made THE most common mistake with Yami's script (and people still do it with the MV version). The script uses variables 1 and 2, and switches 1, 2, 3 and 4 by default. You have used variables 1 and 2 for something completely different. So as soon as you set variable 1 to 16, then transfer to that map, the script is not looking for a file called par16-1 anymore, but it's looking for par16-16.


Code:
The first thing you should do when you add a new script is to look and see if it uses variables or switches, and which ones. If you are already using them for something else, then you need to change the script to use others that are available. Then you need to go into an event and use Control Variables and Control Switches to give them names to make it clear they're being used by the script, so you don't accidentally use them for something else.

Ah, thank you very much! Sorry for bothering with this beginner-mistake. Now everything works like intended.


If this has completely answered your query, please Report your post and ask for the thread to be closed.

ImaginaryVillain
Guys I just want to sit around and work on my game! *gets lots and lots of money shoveled at him* Game, I don't recall a game. What game?

The Stranger
Seems like people have stopped looking both ways before crossing the road nowadays. Blindly walking out into a into a road only ends in disaster.
Today at 1:48 AM •••

Kovos_Datch
Just finished planning out the skeleton of the main quest line of my new game. I'm so excited for it!
Today at 12:11 AM •••

CecilGP
I forgot I had an account on rpgmakercentral lol
Yesterday at 11:09 PM •••